By Phil Stewart and Steve Holland WASHINGTON (Reuters) - Acting Defense Secretary Patrick Shanahan abandoned his quest for the top Pentagon job on Tuesday as reports emerged of domestic violence in his family, plunging the leadership of the U.S. military into new uncertainty just as tensions with Iran are rising. Shanahan said he made the decision, first announced by U.S. 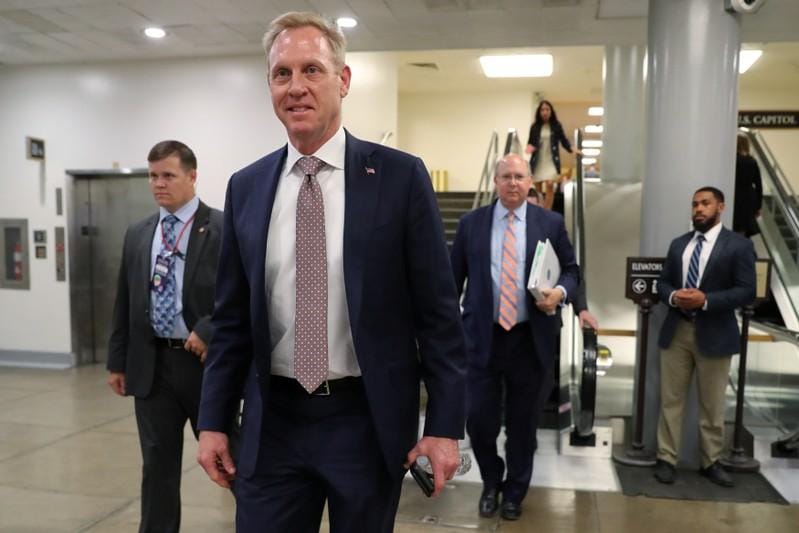 By Phil Stewart and Steve Holland

WASHINGTON (Reuters) - Acting Defense Secretary Patrick Shanahan abandoned his quest for the top Pentagon job on Tuesday as reports emerged of domestic violence in his family, plunging the leadership of the U.S. military into new uncertainty just as tensions with Iran are rising.

Shanahan said he made the decision, first announced by U.S. President Donald Trump in a tweet, to prevent his three children from reliving "a traumatic chapter in our family life."

"It is unfortunate that a painful and deeply personal family situation from long ago is being dredged up," Shanahan, a former Boeing

Hours after naming Secretary of the Army Mark Esper to replace Shanahan as acting secretary, Trump told reporters he would likely nominate the former Raytheon executive and army veteran to the defense secretary position. Esper will take over as acting secretary on Monday, the Pentagon said.

Shanahan, 56, was thrust into the role in an acting capacity in January, after then Defense Secretary Jim Mattis abruptly resigned over policy differences with Trump. His resignation marks the second abrupt departure in less than six months at the Pentagon, a highly unusual degree of turnover.

Shanahan had been due to go before U.S. senators for confirmation hearings when the allegations of incidents of domestic violence surfaced as part of FBI background checks.

USA Today reported that the FBI had been examining a nine-year-old dispute involving Shanahan and his then-wife.

The newspaper reported https://www.usatoday.com/story/news/politics/2019/06/18/defense-secretary-fbi-patrick-shanahan-wife-domestic-violence-altercation/1470811001 that Shanahan said in a statement late on Monday that he "never laid a hand on" his former wife. USA Today reported that he and his wife both claimed they had been punched by the other and that his wife was arrested after the incident but the charges were dropped.

The Washington Post also reported that Shanahan's teenage son allegedly hit his mother with a baseball bat in 2011, when the Shanahans were already living apart, leaving her unconscious in a pool of blood.

The Post said Shanahan had been responding to its questions about the incidents since January. He told the paper he now believes he was wrong to say in a memo to his ex-wife’s brother that his son had acted in self-defense.

"Bad things can happen to good families . . . and this is a tragedy, really," the paper quoted Shanahan as saying. He added the disclosure of the incident would "ruin my son's life."

Shanahan's ex-wife and son could not be reached for comment.

Shanahan has been a prominent figure as tensions between the United States and Iran have risen in recent weeks. It was Shanahan who announced the deployment of about 1,000 more troops to the Middle East on Monday, citing concerns about an Iranian threat.

Worries about a confrontation between the two countries have mounted since attacks last week on two oil tankers near the Gulf. Washington blamed long-time foe Iran for the incidents but Tehran denies responsibility.

Senate Democratic leader Chuck Schumer said it was a bad time for the United States not to have stable leadership at the Pentagon.

"This is a very difficult time, with everything going on in Iran and with provocations and counteractions. And to have no Secretary of Defense at this time? It's appalling, and it shows the chaos in this administration," he told reporters.

The decision to stand down promises to prolong what has already been the longest period without a confirmed defense secretary.

Shanahan was the longest official in history to serve as secretary of defense in only an acting capacity, according to Pentagon records. Part of the delay was due to Shanahan being under investigation by the Pentagon inspector general for allegedly seeking preferential treatment of Boeing while at the department. He was cleared of wrongdoing in April.

Shanahan did not have prior experience in national security matters before he was picked by Mattis to be his deputy.

A source familiar with the situation said Shanahan met Trump in the Oval Office on Tuesday morning to say he wanted to step down. The source, speaking to Reuters on condition of anonymity, said the decision was 100 percent Shanahan's.