SKOPJE (Reuters) - Several thousand Macedonians gathered in the capital Skopje on Sunday to express their support for NATO and European Union membership bids and for a change in the country's name. The crowd, waving Macedonian flags, marched through Skopje city centre and stopped in front of the European Union office in Macedonia to hear Prime Minister Zoran Zaev speak 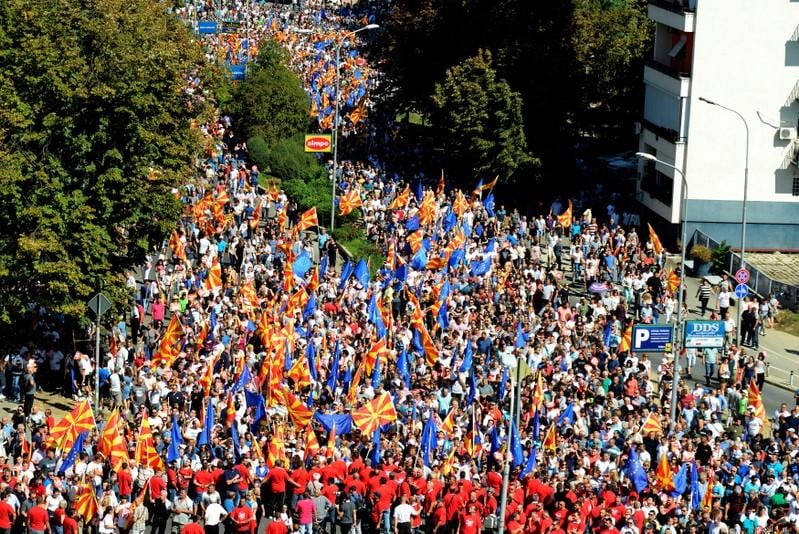 SKOPJE (Reuters) - Several thousand Macedonians gathered in the capital Skopje on Sunday to express their support for NATO and European Union membership bids and for a change in the country's name.

"EU and NATO is the safe road, for us there is no other alternative. That's our guide for a better life," Zaev told them.

He called on people to vote in support of a "historic" decision on Sept. 30, when a referendum on both the membership bids and the agreement with Greece to change the country's name to Republic of North Macedonia will take place.

Greece, a member of both NATO and the EU, has refused to accept the Balkan country's name, saying it implies territorial claims on the Greek province of Macedonia and amounts to an appropriation of its ancient civilisation. It has blocked the country's membership bids.

Macedonia was part of the now-defunct Yugoslavia, declaring independence in 1991.

Zaev's government, elected in 2017, pushed for an agreement with Greece and the two sides agreed on the new name in June.

In June, NATO invited Macedonia to begin accession talks with the alliance, but said it would have to change its constitution and adopt the new name first.

The EU has also said it would set a date for Macedonian accession talks pending implementation of the name deal.

Macedonian nationalists who oppose the deal organised a protest in the eastern town of Stip on Sunday.

"They (the government) are taking advantage of the Macedonian people's strong will to achieve European standards, true prosperity, stability and security, to push an agenda which is against our state and national interests," the leader of the opposition VMRO-DPMNE party, Hristijan Mickoski, told about 2,000 people in Stip.

According to recent opinion polls, more than 50 percent of people are likely to vote, with the majority supporting the membership bids and the name deal.