By Josh Smith and Matt Spetalnick SEOUL/WASHINGTON (Reuters) - A senior North Korean official is headed to New York for talks with U.S. Secretary of State Mike Pompeo, the latest indication that an on-again-off-again summit between President Donald Trump and North Korea's leader may go ahead next month. 'We have put a great team together for our talks with North Korea,' Trump said in a Twitter post on Tuesday. 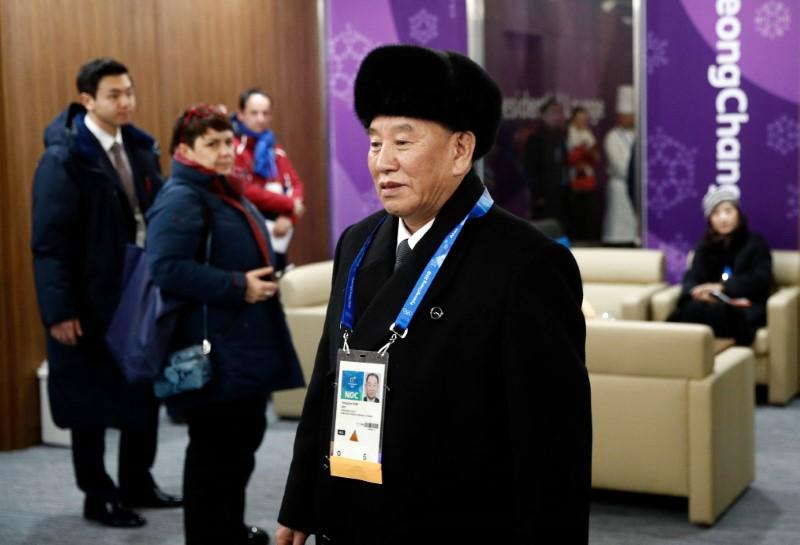 By Josh Smith and Matt Spetalnick

SEOUL/WASHINGTON (Reuters) - A senior North Korean official is headed to New York for talks with U.S. Secretary of State Mike Pompeo, the latest indication that an on-again-off-again summit between President Donald Trump and North Korea's leader may go ahead next month.

"We have put a great team together for our talks with North Korea," Trump said in a Twitter post on Tuesday. "Meetings are currently taking place concerning Summit, and more. Kim Young (sic) Chol, the Vice Chairman of North Korea, heading now to New York. Solid response to my letter, thank you!"

"The United States continues to actively prepare for President Trump’s expected summit with leader Kim in Singapore," she said.

The North Korean envoy was scheduled to fly to the United States on Wednesday after speaking to Chinese officials in Beijing, South Korea's Yonhap news agency said.

The talks show that planning for the unprecedented summit, initially scheduled for June 12, is moving ahead after Trump called it off last week in a letter to the North's leader, Kim Jong Un.

A day later, Trump, who frequently exchanged insults and threats with Kim Jong Un before they began talking about a summit, said he had reconsidered and officials from both countries were meeting to work out details.

Kim Yong Chol will be the most senior North Korean official to meet top officials for talks in the United States since Jo Myong Rok, a marshal, met then-President Bill Clinton at the White House in 2000.

Kim Yong Chol coordinated the North Korean president's two meetings with Pompeo in April and May.

North Korea has faced years of isolation and economic sanctions over its nuclear and missile programmes since it conducted its first nuclear test in 2006.

The North had tested missiles believed to be capable of reaching the United States but Trump has vowed not to let Pyongyang develop one that could deliver a nuclear warhead.

North Korea has rejected U.S. demands for it to unilaterally abandon its nuclear programme. It defends its nuclear and missile programmes as a deterrent against what it sees as U.S. aggression. The United States stations 28,500 troops in South Korea, a legacy of the 1950-53 Korean War.

This week's talks and meetings on the border between North and South Korea are aimed at determining whether North Korea is prepared to make sufficient commitments toward getting rid of its nuclear weapons, a U.S. official said.

Kim Jong Un has sent favorable signals in recent days and Trump’s aides will soon assess whether he is willing to take serious steps before making a final decision on whether to go ahead with the summit, the official said, speaking on condition of anonymity.

Kellyanne Conway, a top adviser to Trump, told Fox News a summit might not take place on the date originally set but perhaps might go ahead shortly after.

Events have moved quickly since Kim Jong Un made a conciliatory New Year’s address at the end of last year, following months of sharply rising tension and war-like rhetoric between Trump and Kim.

Kim and South Korean President Moon Jae-in held a surprise meeting on Saturday at the border village of Panmunjom, during which they agreed the North Korea-U.S. summit must be held.

On Sunday, the U.S. State Department said American and North Korean officials had met at Panmunjom and the White House's Sanders said a U.S. delegation was meeting with a North Korean delegation in the demilitarized zone between the two Koreas.

At the same time, a "pre-advance" U.S. team was in Singapore to meet North Koreans and the White House announced on Tuesday that Trump would meet with Japanese Prime Minister Shinzo Abe on June 7.

for supporting the North's nuclear and missile programmes in 2010 and 2016, respectively, so a visit to the United States would indicate the U.S. government has granted him a waiver.

During his tenure as a senior intelligence official, Kim was accused by South Korea of masterminding deadly attacks on a South Korean navy ship and an island in 2010. He was linked by U.S intelligence to a cyber attack on Sony Pictures in 2014.

North Korea denied any involvement in both attacks.

In Kim Jong Un and Moon's first meeting on April 27, they agreed to seek the "complete denuclearisation" of the Korean peninsula but did not define what that meant or how that would proceed.

South Korea's Defence Ministry said it did not have plans to change exercise schedules with the U.S. military.