By Kate Abnett BRUSSELS (Reuters) - The United Nations and Britain will host an online climate summit in December, the fifth anniversary of the U.N. Paris climate agreement, in a last-ditch bid to have countries meet a deadline to upgrade their emissions-cutting pledges. The aim is to inject momentum into global efforts to combat climate change, after this year's planned U.N. 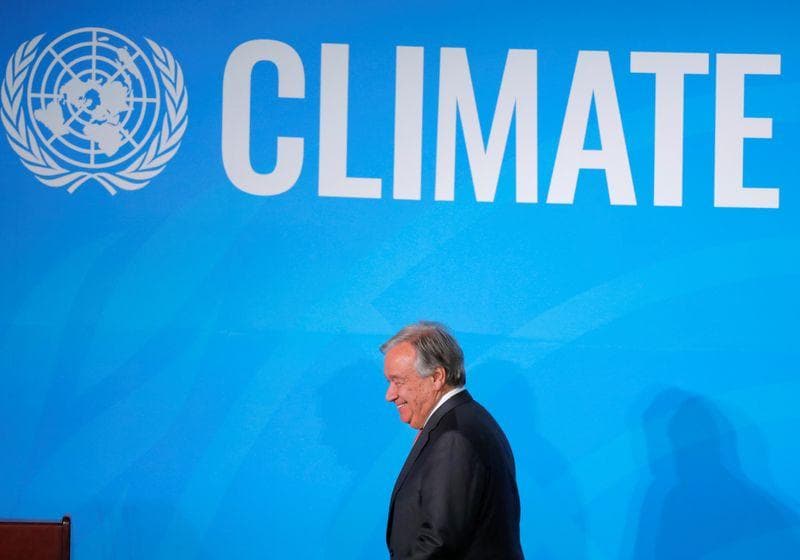 BRUSSELS (Reuters) - The United Nations and Britain will host an online climate summit in December, the fifth anniversary of the U.N. Paris climate agreement, in a last-ditch bid to have countries meet a deadline to upgrade their emissions-cutting pledges.

The aim is to inject momentum into global efforts to combat climate change, after this year's planned U.N. climate summit in Glasgow was postponed by a year due to the coronavirus pandemic.

At a climate roundtable on Thursday on the sidelines of the annual gathering of world leaders for the U.N. General Assembly, U.N. Secretary-General Antonio Guterres said the online summit on Dec. 12 would be "an important moment to continue raising climate ambition."

Guterres also urged big emitters like China and the European Union – both of which announced tougher climate targets this month - to follow up on those commitments with concrete plans and policies.

Nearly 200 signatories to the Paris Agreement pledged to update their 2015 commitments before the end of 2020, but no large emitters have formally submitted new pledges to the U.N.

On Nov. 4, the United States is set to become the only signatory to exit the agreement after President Donald Trump announced his intention to quit in his first year in office.

Prime Minister Boris Johnson said on Thursday that Britain was "going flat out" to upgrade its Paris climate pledge, but he gave no date for when it would be unveiled.

Averting this would require rapid action by governments to wean the global economy off fossil fuels, delegates said on Thursday. Vulnerable countries also say they need financial help to adapt to the climate-related devastation already on their doorsteps.

"We need solidarity we can see, reductions in emissions we can measure, and resources vulnerable nations can afford to access now," said Fiji Prime Minister Josaia Voreqe Bainimarama.

The scale of ambition unveiled at the December summit may rest on the results of the Nov. 3 U.S. presidential election. Trump's Democratic challenger, Joe Biden, has made urgent climate action a pillar of his campaign and has vowed to recommit the United States to the Paris Agreement if elected.

Chinese President Xi Jinping's surprise announcement this week to the General Assembly that China will commit to reach carbon neutrality before 2060 could also galvanise action by other countries ahead of December.

The online summit will take place a day after EU leaders meet in hopes of clinching a deal on a more ambitious 2030 climate target for the 27-country bloc.

(Reporting by Kate Abnett in Brussels; Editing by Mary Milliken and Matthew Lewis)