Brussels: If Scottish voters this week say Yes to independence, not only will they tear up the map of Great Britain, they'll shake the twin pillars of Western Europe's postwar prosperity and security — the European Union and the US-led NATO defense alliance.

In breaking away from the rest of the United Kingdom, Scotland would automatically find itself outside both the EU and NATO, and have to reapply to join both, officials from those Brussels-based organizations have stressed.

For the EU especially, Scottish re-entry could be a long and arduous process, with other countries dead set against letting the Scots retain the privileges awarded Britain: the so-called opt-outs from being required to use the euro single currency and to join the multination Schengen zone where internal border controls have been scrapped. 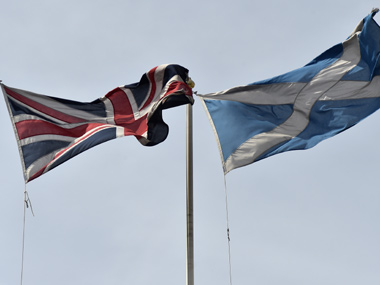 For NATO's admirals and generals, the current Scottish government's insistence on a sovereign Scotland becoming free of nuclear weapons would pose enormous strategic and operational headaches, even if a transitional grace period were agreed on. A new home port would have to be found for the Royal Navy's four Trident missile-carrying submarines and their thermonuclear warheads, currently based on the Clyde.

This "risks undermining the collective defense and deterrence of NATO allies," Britain's Ministry of Defense has said. In what might be read as a warning to the Scots, the ministry has said a nuclear-free stance could constitute a "significant" hurdle to Scotland being allowed back into NATO.

Until Scotland rejoined the alliance, to which it's belonged with the rest of Britain for 65 years, new arrangements would also need to be found to patrol vital shipping routes in the North Atlantic and North Sea. If Scotland were to choose not to rejoin, it would pose a conundrum for NATO for which there is no real precedent: what to do following the loss of a developed, democratically governed part of alliance territory that has opted for neutrality, said Daniel Troup, research analyst at the NATO Council of Canada.

Emergence of a new Western European country of 5 million inhabitants with roughly the land area of the Czech Republic or the US state of Maine or would also set in motion political and social forces whose effects are impossible to predict. Because of British voting patterns, the political groups in England, Wales and Northern Ireland that are seeking Britain's exit from the European Union would become proportionately stronger in Parliament.

Meanwhile, on the continent, from Catalonia in Spain to the Dutch-speaking Flemish areas of Belgium, other European peoples that do not have their own states would likely be emboldened to follow the Scots' example.

Loss of Scotland would also weaken the influence of Britain inside the 28-nation European Union. For the moment, the British, along with the Germans and French, constitute the trade bloc's Big Three. Without Scotland's population, Britain would drop to No. 4, behind Italy.

That would mean fewer British members of the European Parliament, as well as a reduced say in population-weighted decision-making in the EU's executive.

"In the European Union, size matters," said Almut Moeller, an EU expert at the German Council on Foreign Relations. "It will be a rump United Kingdom."

This would have major policy implications. A whittled-down Britain would have a weaker hand in pressing for the kind of EU it favors: more of a free market, and less of a political union.

Simultaneously, said Professor Richard G. Whitman, director of the Global Europe Center at the University of Kent, politicians and civil servants in London would be "massively preoccupied" for years in disentangling England from Scotland, following more than three centuries of political and economic unity.

The result would be "a much-reduced bandwidth for defending a more liberalistic agenda" in Europe, Whitman said, including the proposed Transatlantic Trade and Investment Partnership between the EU and the United States.

Under both NATO and EU rules, any existing member could blackball Scotland's application for admission, and some might find domestic political cause to do so. Spain, for example, might want to discourage independence-minded Catalans. For the English, divvying up the common assets with the Scots might turn as acrimonious as a Hollywood divorce, Whitman said.

If Scotland sought special arrangements while trying to get back into the European Union, that could provide a wedge for other countries to demand renegotiation of their own terms of membership, and calls to revise the treaties that are EU's constitutional basis, Moeller said. Germany, the bloc's richest and most influential nation, would be adamantly against that, she said.

A dissenting prediction comes from a Swedish expert on the EU. The 18-month interlude between Thursday's vote and the start date of actual Scottish independence would be enough to allow the Scots and EU to negotiate a deal so that on the very day it became a country, Scotland could seamlessly become an EU member in its own right, said Niklas Bremberg, a research fellow at the Swedish Institute of International Affairs.

The most fateful consequence of a Scottish vote in favor of independence could be very close to home: in neighboring England. The English have already soured sufficiently on the European Union to the extent that in the March elections for the European Parliament, they cast more votes for the anti-EU UKIP party than any other.

Fabian Zuleeg, chief executive of the European Policy Center, a Brussels-based think tank, predicted the Scots this Thursday could set an example of sorts_for the English.

"The exit of Scotland from the UK would increase the chances of the exit of the UK from the EU," Zuleeg said.