Scores arrested, beaten as Zimbabwe police crack down on protests

By MacDonald Dzirutwe HARARE (Reuters) - Scores of Zimbabwean civilians including a prominent activist were detained and charged with public violence on Wednesday and others were beaten, lawyers and witnesses said, pointing to a heavy crackdown on dissent by security forces. After two days of protests against fuel price hikes, residents said soldiers and police were patrolling Harare townships and assaulting some people in their homes, a tactic used by Robert Mugabe's security services during his almost four decades of increasingly repressive rule. Some internet services that were cut on Tuesday were partially restored on Wednesday, the final day of a three-day stay-at-home strike against steep fuel price hikes 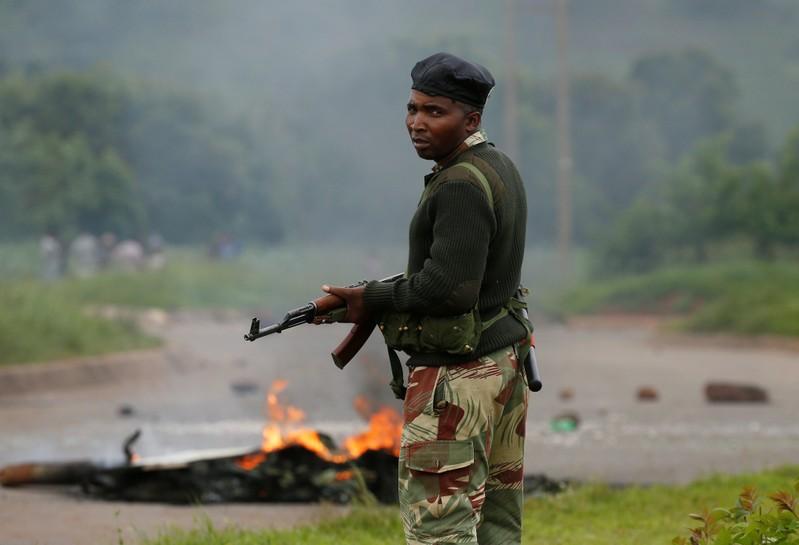 HARARE (Reuters) - Scores of Zimbabwean civilians including a prominent activist were detained and charged with public violence on Wednesday and others were beaten, lawyers and witnesses said, pointing to a heavy crackdown on dissent by security forces.

After two days of protests against fuel price hikes, residents said soldiers and police were patrolling Harare townships and assaulting some people in their homes, a tactic used by Robert Mugabe's security services during his almost four decades of increasingly repressive rule.

Some internet services that were cut on Tuesday were partially restored on Wednesday, the final day of a three-day stay-at-home strike against steep fuel price hikes. But social media platforms like Whatsapp, Facebook and Twitter remained blocked because of a government order.

A legal and media group earlier went to court to have the shutdown reversed.

Joana Mamombe, an opposition lawmaker, said she was in hiding after soldiers sought her out at her parents' home on Tuesday and beat up her father, leaving him hospitalised and unable to sit.

"I am very scared for my life. This is a crackdown on those of us who oppose this government. They want to silence opposition voices," she told Reuters by telephone.

Zimbabweans had hoped President Emmerson Mnangagwa would make good on pre-election pledges to revive the economy and break with the Mugabe era. But since the November 2017 coup that ousted Mugabe, Zimbabwe has fallen back into familiar ways.

Dollar shortages are battering the economy, rocketing inflation is destroying the value of citizens' savings and the government is reacting forcefully to crush dissent.

The internet blackout has left many without access to social media, exposing the government open to accusations that it wanted to prevent images of heavy-handedness from being broadcast around the world.

Mnangagwa, on a trip to Russia and the World Economic Forum in Davos, said he was "deeply saddened" by the violent protests.

"Resolving Zimbabwe's economic challenges is a monumental task, and while it may not always feel that way, we are moving in the right direction," he said on his official Facebook page.

There was no immediate government comment on the series of arrests or allegations of violence by police and soldiers.

An official inquiry last year found troops had used "disproportionate and unjustified" force in shooting and killing six civilians during interventions to stop violence after Mnangagwa was elected on July 30.

"THEY WANTED TO KILL US"

One said soldiers smashed their way into his house and dragged him to an open space, where he and around 20 other people were beaten and accused of being protesters.

"They wanted to kill us but I managed to escape," said one man, who had a swollen eye and a bruised back, before being taken inside by a nurse.

Wednesday was the third and final day of the stay-at-home protest called by unions in response to Mnangagwa increasing the price of fuel by more than 150 percent.

Shops, banks and restaurants in the centre of the capital remained closed and there was little road traffic.

Evan Mawarire, a Harare pastor who rose to prominence as a Mugabe critic and led a national protest shutdown in 2016, told Reuters police had surrounded his house after he used Facebook posts to urge Zimbabweans to join the stay-at-home action.

He was bundled into a truck by about a dozen armed police early on Wednesday, formally arrested and charged with inciting public violence, his lawyer Beatrice Mtetwa said.

A spokesman for Zimbabwe Lawyers for Human Rights said it was representing 69 others who were charged with public violence in court. Another 13 would appear later while dozens would face the same charges in the second city Bulawayo on Thursday.

Police said on Tuesday they had arrested more than 200 people following the protests. Three people, including a police officer, died in violent demonstrations on Monday.

In central Harare on Wednesday, police fired tear gas to disperse a crowd outside the only shop that seemed to be open as soldiers controlled a long queue of people desperate to buy food.

At the only fuel station doing business, soldiers and police were being served ahead of other motorists, whose cars formed a line stretching more than two kilometres (1.2 miles).

Mnangagwa said the price jump was needed as Zimbabwe's fuel was the cheapest in southern Africa and the increase would help end "rampant illegal" fuel trading.