CAIRO (Reuters) - Saudi Arabian King Salman bin Abdulaziz arrived in the NEOM economic zone on Wednesday for a period of rest and relaxation, according to state news agency SPA. 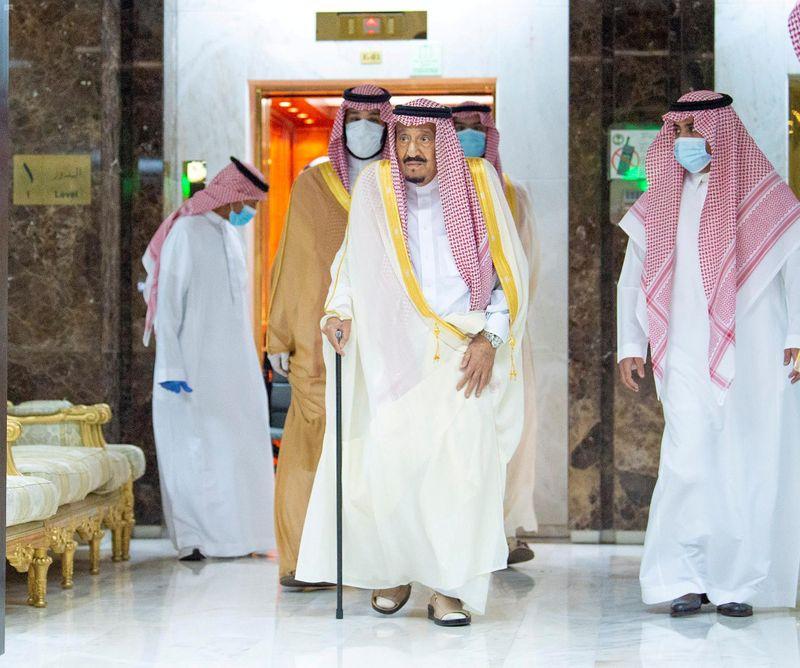 CAIRO (Reuters) - Saudi Arabian King Salman bin Abdulaziz arrived in the NEOM economic zone on Wednesday for a period of rest and relaxation, according to state news agency SPA.

The 84-year-old king had been released from hospital on July 30 after undergoing surgery to remove his gall bladder.

In videos posted by Saudi state television and the kingdom's Ministry of Foreign Affairs of King Salman's arrival in NEOM, he can be seen standing on an escalator carrying him from a plane to a waiting car, and walking into a building, surrounded by several men wearing masks. The king was walking with a cane, as he usually does. Reuters could not independently verify the footage.

King Salman, who has ruled the world's largest oil exporter and close U.S. ally since 2015, had been admitted to hospital on July 20, suffering from gall bladder inflammation.

Crown Prince Mohammed bin Salman, or MbS as he is widely referred to, is Saudi Arabia's de facto ruler and next in line to the throne.

The royal family has traditionally spent much of the summer outside the country in places such as the French Riviera, Marbella in southern Spain and Tangier, Morocco.

However, since 2018 King Salman has spent time in NEOM, the $500 billion flagship business zone that MbS has pledged to build from scratch near the Red Sea.

It is part of his Vision 2030 plan to attract foreign investment and create jobs in a bid to wean the kingdom off reliance on oil. NEOM includes high-tech projects powered by wind and solar energy as well as sports halls, concert facilities and restaurants.

(Reporting by Alaa Swilam and Omar Fahmy in Cairo; Writing by Nafisa Eltahir; Editing by Sandra Maler and Matthew Lewis)