Ryanair strikes set to hit over 40,000 passengers across Europe

DUBLIN (Reuters) - Ryanair is bracing on Friday for another strike by staff as walkouts in six European countries, mainly cabin crew, force flight cancellations that will disrupt the plans of more than 40,000 travellers. Europe's largest low-cost carrier has faced a string of strikes since it recognised trade unions for the first time in December, damaging bookings and forcing it to consider cutting short-term growth plans if labour unrest continues 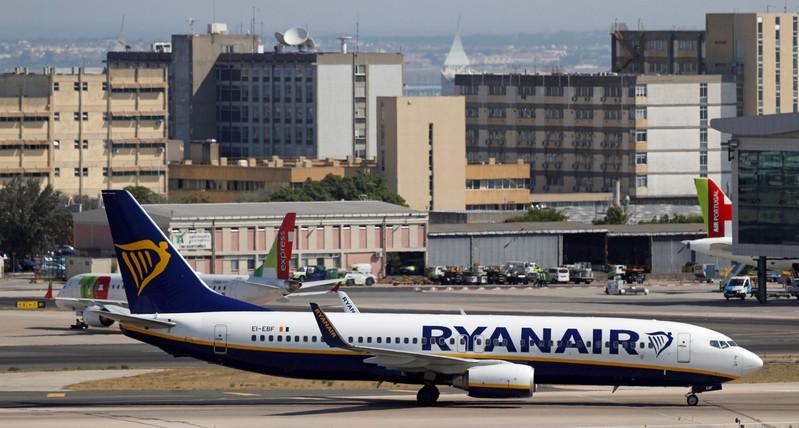 Europe's largest low-cost carrier has faced a string of strikes since it recognised trade unions for the first time in December, damaging bookings and forcing it to consider cutting short-term growth plans if labour unrest continues.

Cabin crews in Germany, Belgium, Portugal, the Netherlands, Spain and Italy, as well as pilots in Germany, served Ryanair strike notices of the 24-hour walkout, stepping up pressure in talks over pay and conditions.

Ryanair initially cancelled 150 flights due to what it said was an unnecessary strike by a "tiny minority of cabin crew". The carrier said on Thursday it expected up to 100 more to be cancelled after German pilots said they would join the protest.

The cancellations account for around 10 percent of its 2,400 scheduled flights on Friday.

The action in some of Ryanair's largest markets will be its second biggest one-day strike after some 55,000 customers were affected in August when pilots in five European countries walked out at the height of the summer holiday season.

The Irish airline says it has made significant progress in recent weeks in negotiations, including reaching collective labour agreements with staff in Ireland, Britain, Italy and Germany.

"These strikes show that, despite its recent rhetoric, Ryanair has a long way to go before it enjoys sustainable industrial relations," Gabriel Mocho Rodriguez, civil aviation secretary at the International Transport Workers' Federation (ITF), said in a statement.

"You cannot claim negotiations are going well when workers in six countries on your network decide to take simultaneous strike action," he added.