By Sarah N. Lynch WASHINGTON (Reuters) - Admitted Russian agent Maria Butina was sentenced to 18 months in prison on Friday after the Siberia native, her voice breaking with emotion, begged a judge for mercy and expressed remorse for conspiring with a Russian official to infiltrate a gun rights group and influence U.S. conservative activists and Republicans. 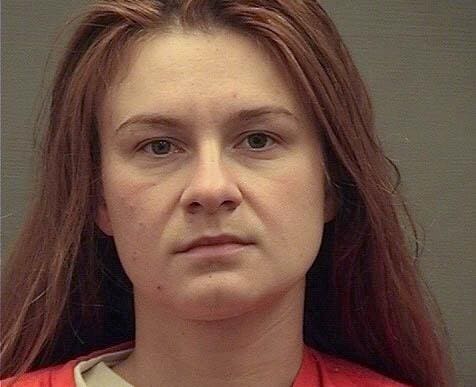 WASHINGTON (Reuters) - Admitted Russian agent Maria Butina was sentenced to 18 months in prison on Friday after the Siberia native, her voice breaking with emotion, begged a judge for mercy and expressed remorse for conspiring with a Russian official to infiltrate a gun rights group and influence U.S. conservative activists and Republicans.

U.S. District Court Judge Tanya Chutkan imposed a sentence that matched the prison term prosecutors requested and also agreed to have Butina, 30, deported back to Russia after she completes her incarceration. The sentence included the nine months Butina already has served in jail since her July arrest, meaning she has about nine more months behind bars.

Lawyers for Butina, a former graduate student at American University in Washington who publicly advocated for gun rights, had asked the judge to impose a sentence of time served and let her return to Russia.

"For all the international scandal my arrest has caused, I feel ashamed and embarrassed. My parents taught me the virtue of higher education, how to live life lawfully, and how to be good and kind to others," Butina said.

"I have three degrees, but now I'm a convicted felon with job, no money and no freedom," Butina added, referring to her academic degrees.

Butina pleaded guilty in December to one count of conspiring to act as a foreign agent and agreed to cooperate with prosecutors. The case marked another irritant in fraught U.S.-Russian relations.

"This was no simple misunderstanding by an over-eager foreign student," Chutkan said before imposing the sentence.

Butina admitted to conspiring with a Russian official and two Americans from 2015 until her arrest to infiltrate the National Rifle Association, a group closely aligned with U.S. conservatives and Republican politicians including President Donald Trump, and create unofficial lines of communication to try to shape Washington's policy toward Moscow.

By coincidence, Trump addressed the NRA's annual meeting in Indianapolis about an hour after Butina's sentencing, drawing enthusiastic cheers by announcing the United States would abandon an international treaty regulating conventional arms sales.

Prosecutors said while Butina did not engage in "traditional" spy craft, she worked behind the scenes to make inroads in conservative political circles and promote warmer U.S.-Russian relations amid persistent tensions between the two powers. She arranged dinners in Washington and New York and attended events to meet high-profile politicians.

Alexander Torshin, a deputy governor of Russia's central bank, was the Russian official mentioned in the case. Torshin was not charged.

Butina's case was separate from Special Counsel Robert Mueller's investigation of Moscow's interference in the 2016 U.S. election, which detailed numerous contacts between Trump's campaign and Russia. Her activities, though, occurred during the same period as the contacts investigated by Mueller.

Until Friday, Butina had made no major public comments since her arrest. Her remarks ran counter to the Kremlin's account of Butina being forced by the United States to falsely confess to the "ridiculous" charge of being a Russian agent.

"I destroyed my own life," Butina told the judge.

"While I know I am not this evil person who has been depicted in the media, I am responsible for these consequences," Butina added.

"Now I beg for mercy, for the chance to go home and restart my life," she said.

Her lawyers downplayed her crime as a simple failure to notify the Justice Department of her activities on Russia's behalf.

"If I had known to register as a foreign agent, I would have done so without delay," Butina told the judge. "I just didn't register because I didn't know to."

"This is not a registration offence," Kenerson said. "This is a case where the defendant acted in the United States as an agent of the Russian government."

Chutkan said determining Butina's sentence was "far more complicated" than most cases. The 18 months recommended by prosecutors that Chutkan adopted were less than they could have sought, reflecting Butina's cooperation after her guilty plea that she said included speaking to a congressional committee, the FBI and federal prosecutors.

Reuters previously reported Butina was a public Trump supporter who bragged at Washington parties she could use her political connections to help people land jobs in his administration.

One of the two Americans referenced by prosecutors was Butina's then-boyfriend Paul Erickson, a conservative political activist. Erickson was not charged in the case but faces wire fraud and money laundering charges in a separate prosecution in South Dakota.

Many of Butina's meetings were documented on her social media pages, with photos of her at NRA conferences, a high-profile annual prayer breakfast in Washington, and posing with dignitaries including Republican former Wisconsin Governor Scott Walker, a 2016 presidential candidate.