By Julie Gordon OTTAWA (Reuters) - Just four days into the new school year, Trevor Boutilier's five-year-old son was sent home from his Ottawa kindergarten with a runny nose and slight cough, and told to stay away until he'd had a COVID-19 test and was symptom free. The local testing center was overrun, so Boutilier drove his son miles out of the city to a small town for the test. They waited for four days for the result, which came back negative. 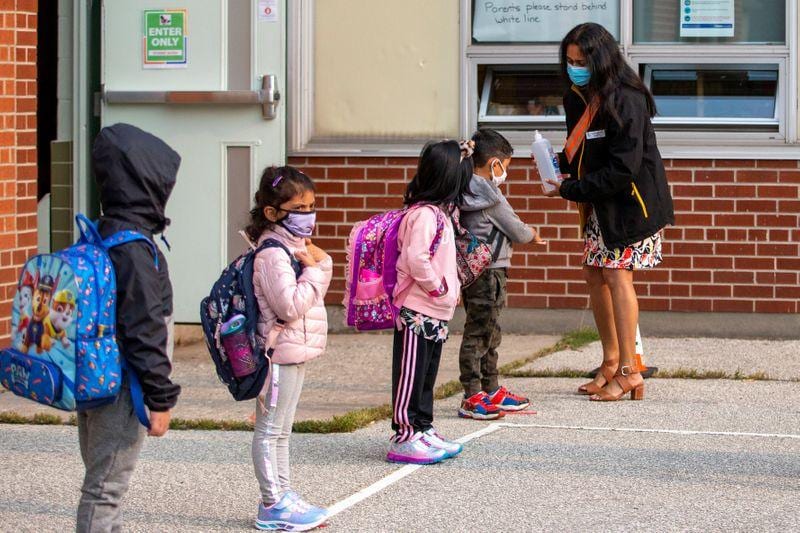 OTTAWA (Reuters) - Just four days into the new school year, Trevor Boutilier's five-year-old son was sent home from his Ottawa kindergarten with a runny nose and slight cough, and told to stay away until he'd had a COVID-19 test and was symptom free.

The local testing center was overrun, so Boutilier drove his son miles out of the city to a small town for the test. They waited for four days for the result, which came back negative.

By then, his son, who suffers seasonal allergies, had been symptom free for days and missed nearly a week of school.

"If you're going to send them home and have them get COVID tested for every runny nose and every sniffle then you're never going to have any kids in school," Boutilier said. "You're just going to have line-ups upon line-ups at the testing centers."

The long checklist of symptoms that Canadian schools and daycare centers use to screen children has emerged as a major point of contention for parents. Like Boutilier, they say it is overly restrictive, especially in cold and allergy season, and will force children to miss classes and parents to miss work.

This week, British Columbia removed a number of common cold symptoms from its checklist, including runny noses and sore throats, saying those symptoms in isolation should not keep kids at home.

Epidemiologists supported the move, and Ontario and Manitoba are now reconsidering their stay-home checklists. Doctors were less sanguine.

"I'm sort of surprised they'd be doing this as COVID cases are going up," said Dr Anna Banerji, a pediatric infectious disease specialist in Toronto.

"A lot of kids that get COVID don't have a fever or shortness of breath," she said, pointing to symptoms still on British Columbia's checklist. "I think you're going to miss a lot of cases."

New COVID-19 infections have surged in Canada in recent days, with an average of 1,144 new cases reported daily over the past week, up sharply from a daily average of 380 in mid-August. Prime Minister Justin Trudeau declared that the second wave had arrived.

The surge, coupled with the reopening of schools for the new term, has led to long line-ups at testing centers in many major cities.

Canada's official opposition leader, Erin O'Toole, slammed Trudeau's government last week after facing a long wait at an Ottawa testing center and called for rapid testing. He is now in isolation after his test came back positive.

"Sore throats and runny nose are symptoms of COVID-19, but they're also symptoms of other well known viruses," said Vancouver doctor Funmi Okunola, who is pushing for rapid home testing. "The only way we can tell the difference between the two is through testing."

But home collection kits are still being reviewed by Health Canada, leaving daily symptom checklists as the best screening option for now, though epidemiologists said the kitchen-sink approach may not be realistic.

"Kids get sick from a lot of stuff and it's probably impossible to keep all symptomatic kids out of the system indefinitely," said Raywat Deonandan, an epidemiologist and associate professor at the University of Ottawa.

"It makes sense to take a few symptoms off the table," he added, noting the focus should be on screening for symptoms like a fever, the most common indicator of COVID-19 in children.

But physicians warned that research is still limited.

"The consequence of not being careful in schools is those schools may shut down and then everyone loses," said Dr Banerji.