By Margarita Antidze TBILISI (Reuters) - The ruling Georgian Dream party declared victory in a parliamentary election in ex-Soviet Georgia on Saturday after four exit polls put it in first place in a tight race. 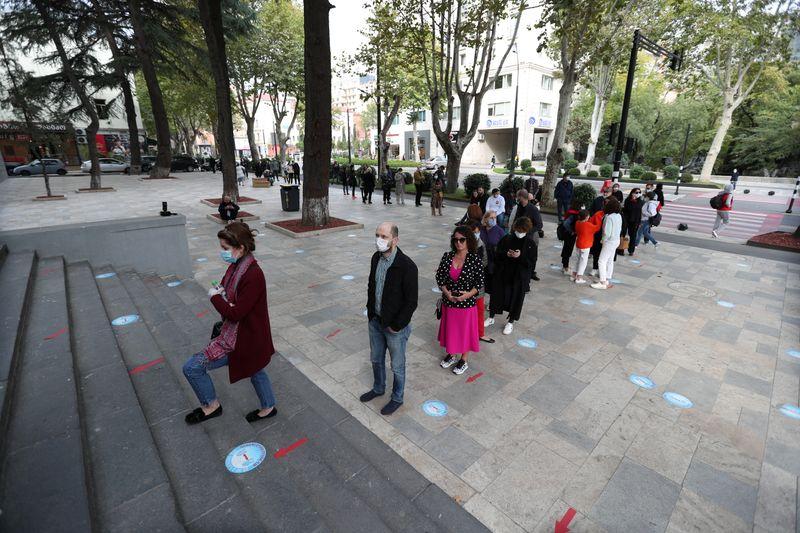 TBILISI (Reuters) - The ruling Georgian Dream party declared victory in a parliamentary election in ex-Soviet Georgia on Saturday after four exit polls put it in first place in a tight race.

But it was not clear if the governing party - founded by Georgia's richest man, Bidzina Ivanishvili - would secure the votes needed to form a single-party government.

"We won! Thank you very much to each Georgian citizen who voted today," Prime Minister Giorgi Gakharia wrote on Facebook.

All polls put the opposition United National Movement (UNM) in second place, but the party did not concede defeat, saying in total the opposition received enough votes to form a coalition.

"The united opposition won an unequal struggle," Nika Melia, one of the UNM leaders, told reporters after the exit polls were released.

Supporters of both sides gathered in different places on the streets of the capital Tbilisi soon after exit polls were announced, with both sides celebrating.

More than 30 opposition parties, led by the UNM, the largest and strongest opposition force, announced on Friday that they would not go into coalition with the ruling party after the election.

and is forecast by the government to contract by 4% in 2020.

The government's popularity has waned, and opponents accuse it of mishandling the economy, selective justice, weak foreign policy and stamping on dissent with the violent dispersal of protests.

Experts say that the distribution of 30 seats in the 150-seat parliament to be filled through voting for individual candidates in electoral districts will be crucial to the outcome and may introduce more diverse voices to the new parliament. The remaining 120 seats will be decided along party lists.

Critics say Ivanishvili, who does not hold a government post, runs the South Caucasus country of 3.7 million people from behind the scenes, an accusation denied by Georgian Dream, which has governed for two consecutive terms.

A fifth of Georgian territory is controlled by pro-Russian separatists following a short war with Russia in 2008.

Both the government and the opposition would like to see Georgia join the European Union and NATO, but such moves would be strongly resisted by Moscow. Georgian Dream also favours closer ties with Russia.

Preliminary results are expected to be announced by the CEC early on Sunday.