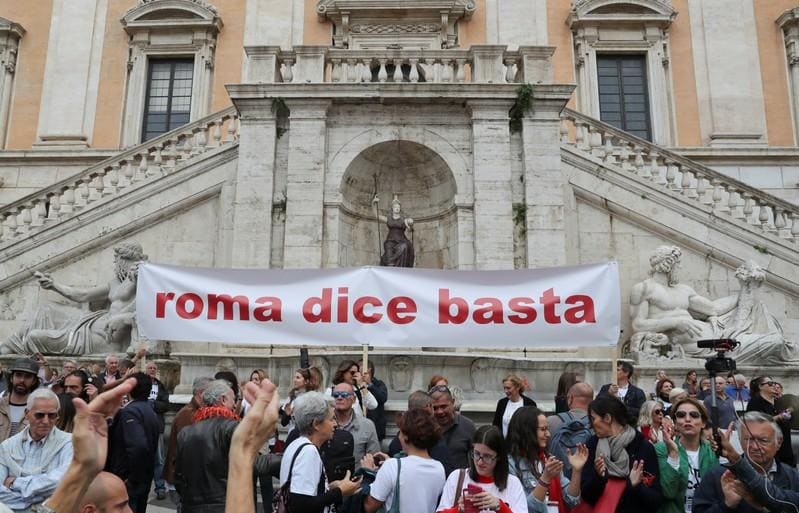 Critics say the city has been in decline for years and accuse Mayor Virginia Raggi, who took office in 2016, of failing to fulfil campaign promises to clean up the mess.

"We're here because Rome deserves better, because Rome is in a state of neglect the like of which has never been seen before," said Marita Monaco, 57, who took part in the protest in a Renaissance square designed by Michelangelo.

"It is a city in disarray, where there are no more rules or social cohesion," she added.

Raggi is a member of the anti-establishment 5-Star Movement and was swept to power following a wave of public disgust over corruption scandals that had battered previous administrations run by both traditional left- and right-wing parties.

The first female mayor in the history of the city, Raggi says she needs more time to overcome Rome's myriad problems, but argues that she is already making good progress.

Her critics say things are getting worse, not better.

A strike by rubbish collectors has left many trash cans overflowing, potholes riddle the roads, while the local transport system is in permanent crisis.

More than 20 buses have caught fire on the streets of the city so far this year, largely the result of poor maintenance, while a broken escalator injured more than 20 Russian soccer fans at a city metro station last Tuesday.

The death this week of a 16-year girl, whose body was found in an abandoned building used by drug dealers, underscored fears about law and order in the city. Police say they believe the girl was gang-raped and have arrested four migrants.

"Rome has become an open sewer, a scandal, full of rats, foxes, wild boar and rubbish," said Rome resident Salvatore Golino. "We are drowning in trash and we can't take it anymore."

A recent video that went viral online showed a family of boar foraging through sacks of rubbish on a city street. Another video earlier this year showed a large boar running up a major city road under the gaze of astonished drivers.

Raggi is standing trial for alleged abuse of office over a contested appointment within her administration. She has denied the accusation, but has said she will resign if found guilty.

A verdict is due on Nov. 10 and Raggi's administration would fall if she left office, potentially opening the way for fresh elections.