Bucharest: Tens of thousands of protesters rallied against the ruling Social Democrat (PSD) government on Friday in cities across Romania and the capital Bucharest where riot police fired tear gas into the crowd and hundreds needed medical attention.

The protests were organised and promoted by groups of Romanians working abroad, angry at what they say is entrenched corruption, low wages and attempts by the PSD to weaken the judiciary in one of the European Union's most corrupt states. 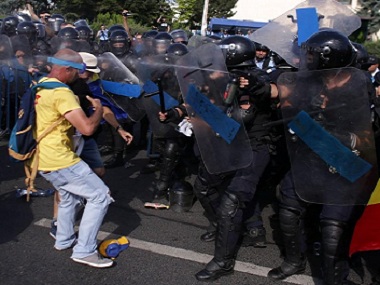 Riot police in Romania used a water canon and sprayed tear gas into the crowd as the protest progressed. Reuters

In Bucharest, some protesters attempted to force their way through security lines guarding the government building. Others threw bottles and rocks at riot police, who said groups of "provocateurs" were present in the square.

More than 400 people required medical assistance, the emergency intervention agency ISU said, including two riot police who got separated from their unit. Tens of thousands staged peaceful protests in other Romanian cities.

"I firmly condemn riot police's brutal intervention, strongly disproportionate to the actions of the majority of people in the square," he said on his Facebook page.

"The interior ministry must explain urgently the way it handled tonight's events."

Among the crowds in Bucharest were truck driver Daniel Ostafi (42), who moved to Italy 15 years ago in search of a future he says Romania could not offer his family, and Mihai Podut (27), a construction worker who left in 2014, first for France and later Germany.

They joined tens of thousands outside government headquarters in scorching temperatures, waving Romanian and European Union flags and demanding the cabinet's resignation. Messages projected on buildings around the square said "We are the people" and "No violence".

An estimated 3 to 5 million Romanians are working and living abroad, the World Bank has said, up to a quarter of the European Union state's population, ranging from day labourers to doctors. They sent home just under $5 billion last year, a lifeline for rural communities in one of the EU's least developed countries.

"I left to give my children a better life, which was not possible here then," said Ostafi.

"Unfortunately, it is still not possible, the people who govern us are not qualified and they are corrupt," he said, adding he hoped the next parliamentary election would see a bigger turnout.

Peaceful protests have repeatedly been held since the Social Democrats took power in early 2017 and tried to decriminalise several corruption offences.