By Sarah N. Lynch WASHINGTON (Reuters) - Jury selection in the criminal trial of President Donald Trump's longtime adviser Roger Stone got off to a contentious start on Tuesday, with the judge denying most of the requests by defence lawyers to exclude potential jurors they fear could be biased against their client 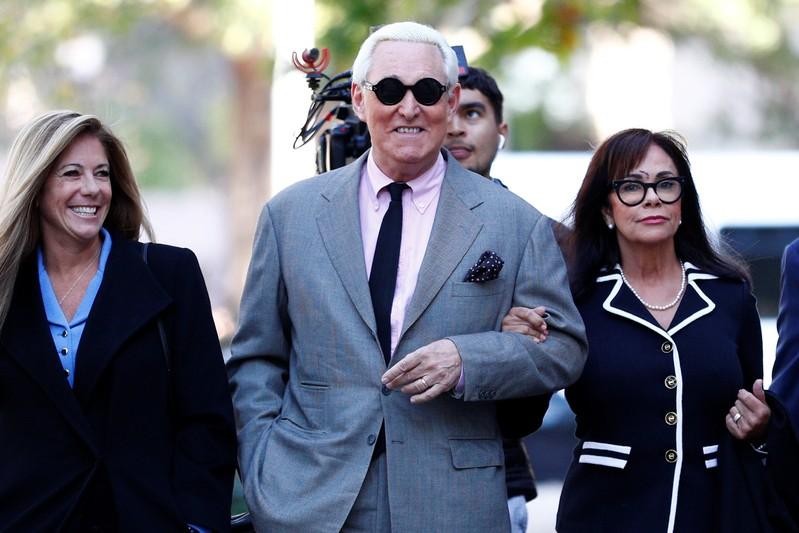 WASHINGTON (Reuters) - Jury selection in the criminal trial of President Donald Trump's longtime adviser Roger Stone got off to a contentious start on Tuesday, with the judge denying most of the requests by defence lawyers to exclude potential jurors they fear could be biased against their client.

Stone has pleaded not guilty to charges of obstructing justice, witness tampering and lying to the House of Representatives Intelligence Committee. That committee is now spearheading the impeachment inquiry against the Republican president in the Democratic-led House over Trump's request that Ukraine investigate a Democratic rival, Joe Biden.

Stone arrived at the courthouse in the U.S. capital on Tuesday morning to a mixture of jeers and cheers.

"Hey, you're going to get to see Manafort," one person yelled, referring to Trump's former campaign chairman Paul Manafort, who is now serving a prison sentence of 7-1/2 years. Others shouted "Roger Stone did nothing wrong."

The trial may renew attention on efforts by Trump's 2016 campaign to capitalize on emails embarrassing to his Democratic opponent Hillary Clinton that U.S. intelligence officials have concluded were stolen by Russian state-backed hackers.

A jury was being chosen from a pool of more than 80 potential jurors. Opening statements could begin as soon as Wednesday, and the trial could last at least two weeks.

At the outset of Tuesday's proceedings, U.S. District Judge Amy Berman Jackson said she would not agree to strike prospective jurors just because they work for the federal government or because they have opinions about Trump.

That warning did not stop Stone's lawyers from trying to strike the very first one, a woman who once served as a communications director for the White House Office of Management and Budget under Democratic President Barack Obama and whose husband is a Justice Department national security attorney.

"She said credibly she doesn't have an opinion on this case," Jackson said as she denied the motion.

The judge also blocked subsequent efforts by Stone's defence to strike prospective jurors who work for the IRS and the Securities and Exchange Commission, one of whom acknowledged she had voted for Clinton.

"Donald Trump is the chief executive for whom these individuals work," Jackson said.

Mueller's investigation, which concluded in March, led to criminal charges against several Trump advisers and campaign aides. Stone and Manafort were the only two from this group not to plead guilty. The incarcerated Manafort was convicted by a Virginia jury last year.

A Republican operative since the days of the Watergate scandal that forced President Richard Nixon to resign in 1974, Stone has been a friend and ally of Trump for some 40 years. He has a tattoo of Nixon's smiling face on his back.

Stone is accused of lying to U.S. lawmakers investigating Russian election interference about the Trump campaign's efforts to obtain the hacked emails that were published by the Wikileaks website to undercut Clinton's candidacy.

Court proceedings were also interrupted when a man sitting in the back of the courtroom appeared to experience a seizure, and was escorted out by paramedics.

(Reporting by Sarah N. Lynch; Writing by Makini Brice; Editing by Will Dunham)