Returning to London, Britain's May faces mammoth task to change minds on Brexit

By Alastair Macdonald and Elizabeth Piper BRUSSELS (Reuters) - British Prime Minister Theresa May on Friday began the mammoth struggle of persuading a deeply divided parliament to back her Brexit deal after an EU summit granted her more time but little to help change minds at home. After a bruising day in Brussels, May secured a two-week reprieve to try to get the deal she negotiated in November through parliament at a third attempt or face a potentially chaotic departure from the European Union as soon as April 12. EU leaders were clear that it was now up to the British parliament to decide the fate of Brexit -- to leave with a deal in a couple of months, depart without an agreement, come up with a new plan or possibly remain in the bloc. 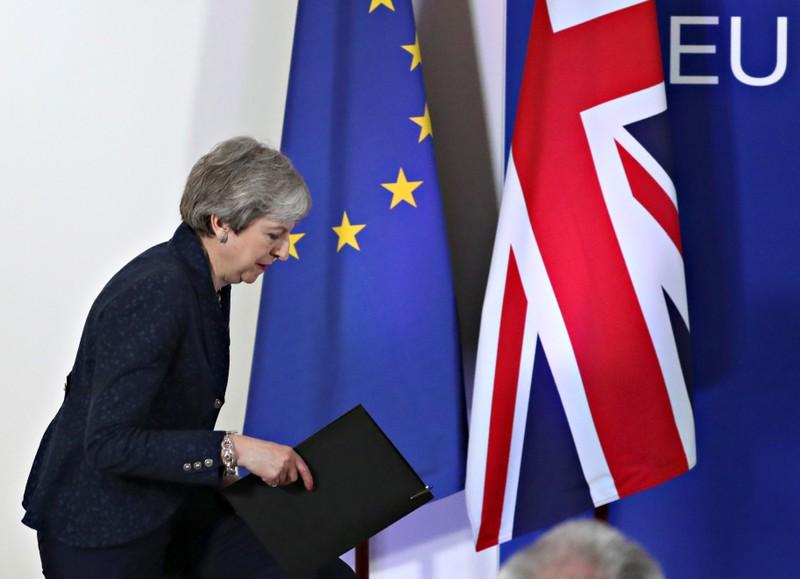 By Alastair Macdonald and Elizabeth Piper

BRUSSELS (Reuters) - British Prime Minister Theresa May on Friday began the mammoth struggle of persuading a deeply divided parliament to back her Brexit deal after an EU summit granted her more time but little to help change minds at home.

After a bruising day in Brussels, May secured a two-week reprieve to try to get the deal she negotiated in November through parliament at a third attempt or face a potentially chaotic departure from the European Union as soon as April 12.

EU leaders were clear that it was now up to the British parliament to decide the fate of Brexit -- to leave with a deal in a couple of months, depart without an agreement, come up with a new plan or possibly remain in the bloc.

While the Brexit deadline may have moved from March 29, however, parliament shows no sign of budging.

In fact, incensed by comments from May on Wednesday night that pinned the blame for the Brexit chaos on them, many British lawmakers have now hardened their resistance to the deal she is due to bring back before them next week.

In an appeal to lawmakers, May said in Brussels: "Last night I expressed my frustration. I know that MPs (members of parliament) are frustrated too. They have difficult jobs to do. I hope we can all agree, we are now at the moment of decision."

She needs to change the minds of 75 more lawmakers to get her deal through after it was overwhelmingly rejected twice before. In a letter to British lawmakers on Friday, May hinted she to might not hold a third vote on the deal at all if it was clear it would not be passed.

"If it appears there is not sufficient support to bring the deal back next week, or the House rejects it again, we can ask for another extension before April 12," she wrote in the letter published on Twitter by a BBC reporter.

While EU leaders were keen to heap pressure on the British parliament, some -- with the notable exception of France --suggested Britain could still win more time to prepare for a no-deal Brexit if lawmakers fail to approve the divorce deal by April 12.

Irish Prime Minister Leo Varadkar summed up the mood in Brussels when he spoke of overwhelming Brexit fatigue.

European Council President Donald Tusk said: "The fate of Brexit is in the hands of our British friends. We are, as the EU, prepared for the worst but hope for the best. As you know, hope dies last."

Leaders doubted whether May could get her deal through parliament, which like the country itself is deeply split over how, or even if, Britain should leave the EU after a 2016 referendum when 52 percent backed Brexit against 48 percent.

One senior EU official said a no-deal Brexit was more likely. "We are in general well prepared. But we can use these few weeks to prepare more for the rather likely no deal scenario," the official said on condition of anonymity.

Parliament will start next week with another vote on Brexit, which business minister Greg Clark said would open the way "for parliament to express a majority of what it would approve".

Those May must win over -- eurosceptic lawmakers in her Conservative Party and the DUP, the Northern Irish party that props up her minority government, plus wavering members of the opposition Labour Party -- did not seem to be softening.

The DUP's Nigel Dodds said May had missed an opportunity to put forward proposals to EU leaders to improve the prospects of an acceptable deal, describing it as a "disappointing and inexcusable" failure.

Labour Party leader Jeremy Corbyn said it was time for parliament to take over Brexit and for lawmakers to make their own decisions about Britain's future.

His deputy Tom Watson said he was prepared to back May's deal, however -- but only if she agreed to holding a second referendum, something she has repeatedly ruled out.

With parliament deadlocked, the lack of certainty is encouraging some Britons to try to influence politicians.

Hundreds of thousands are expected to march through central London on Saturday calling for a second Brexit referendum, while an online petition demanding May revoke the EU leave notice and stop Brexit has got more than 3.5 million signatures.

Seven hours of summit brainstorming on Thursday kept a host of options open for the EU leaders, who say they regret Britain's decision to leave but are eager to move on from what they increasingly see as a distraction.

Now a May 22 departure date will apply if parliament rallies behind the British prime minister next week. If it does not, Britain will have until April 12 to offer a new plan or decide to leave the European Union without a treaty.

In the case of a longer extension, the main idea is for one year, EU officials said. That would give Britain time to hold an election, and possibly a second referendum, and avoid an even longer delay that would complicate negotiations for a new long-term EU budget.