By Sudip Kar-Gupta and Matthias Blamont PARIS (Reuters) - France will keep its restaurants, cinemas and ski resorts closed while it cranks up its COVID-19 vaccination rollout because the coronavirus is still spreading too fast and hospitals remain under severe pressure, Prime Minister Jean Castex said. 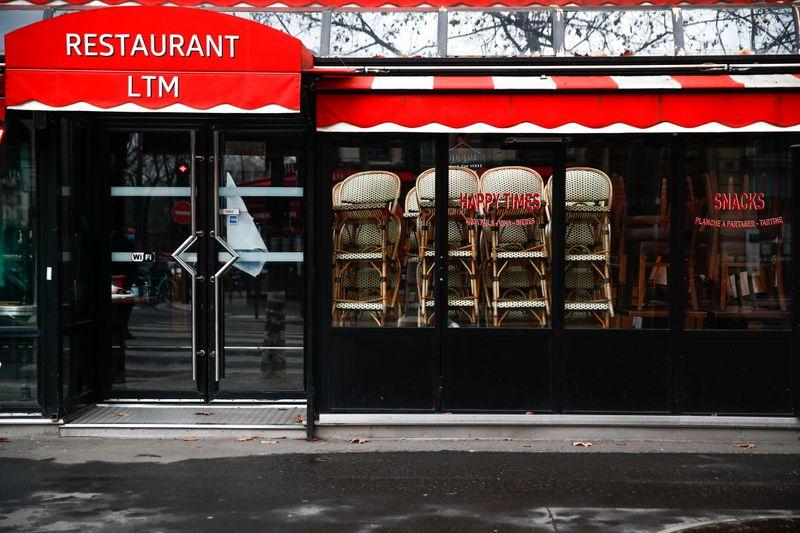 PARIS (Reuters) - France will keep its restaurants, cinemas and ski resorts closed while it cranks up its COVID-19 vaccination rollout because the coronavirus is still spreading too fast and hospitals remain under severe pressure, Prime Minister Jean Castex said.

Castex said that restaurants would remain shuttered until at least mid February and ski resorts might not open before the February holidays. A nightly curfew would be extended until at least Jan. 20 and further national restrictions could not be ruled out, he added.

"It is out of the question that we lower our guard," Castex told a news conference on Thursday.

One in every two intensive care beds are occupied by COVID-19 patients and non-essential procedures are still being postponed to ease the burden on hospitals.

The coronavirus has claimed more than 66,500 lives in France, the seventh highest death toll in the world.

President Emmanuel Macron and his government have come under fire for the slow pace of the vaccine rollout which medical experts say is tangled in red tape and has left France lagging behind European neighbours such as Britain and Germany.

"Vaccination has become the number one priority for the government," Castex said. "We are convinced that it's the broadest, fastest vaccination campaign that will allow us to emerge from the crisis. But let us not confuse haste and speed."

Health Minister Olivier Veran defended bureaucratic safeguards but said procedures would be simplified and that shots would be delivered into arms faster.

France's medical regulator had approved extending the period between the two doses of the Pfizer/BioNTech shot to six weeks from three, he said, allowing more citizens to get a first shot in the near term.

France still expected to deliver 1 million shots by the end of the month, Veran affirmed. So far some 45,000 only have been administered.

France has pre-ordered 200 million doses of different COVID-19 vaccines, more than enough to cover its entire 67-million strong population. Surveys show six in every 10 citizens intend to refuse the vaccine.

Veran said France was closely tracking cases of the new British and South African variants of the virus.

Nineteen cases of the British variant have been identified in France including two particularly worrying clusters in the greater Paris region and Brittany.

France will continue to limit entry to France from Britain to French citizens and returning residents in possession of a negative COVID-19 test.

With more vaccines expected to be approved by regulators by late March, France could hope to emerge from the crisis by the summer, Castex said.

His remarks will be scant consolation for the country's restaurateurs whose kitchens have been empty and chairs stacked on tables for more than two months.

"We don't see the end," Alain Fontaine, manager of the Le Mesturet restaurant, said earlier in the day. He urged compatriots to get inoculated.

"They must understand that if they want to see restaurants, cafes, bistrots, cinemas, theatres reopen, they have to get vaccinated."