By Elizabeth Piper and William James BRIGHTON, England (Reuters) - Opposition Labour Party leader Jeremy Corbyn called on Prime Minister Boris Johnson on Tuesday to resign, but said he would not press for a new election until he was sure Britain would not leave the European Union without a deal. Corbyn said he would do all he could to ensure that Johnson takes a so-called no-deal Brexit 'off the table', setting up an uncomfortable showdown for the prime minister, who insisted he would still oversee Britain's departure on Oct. 31 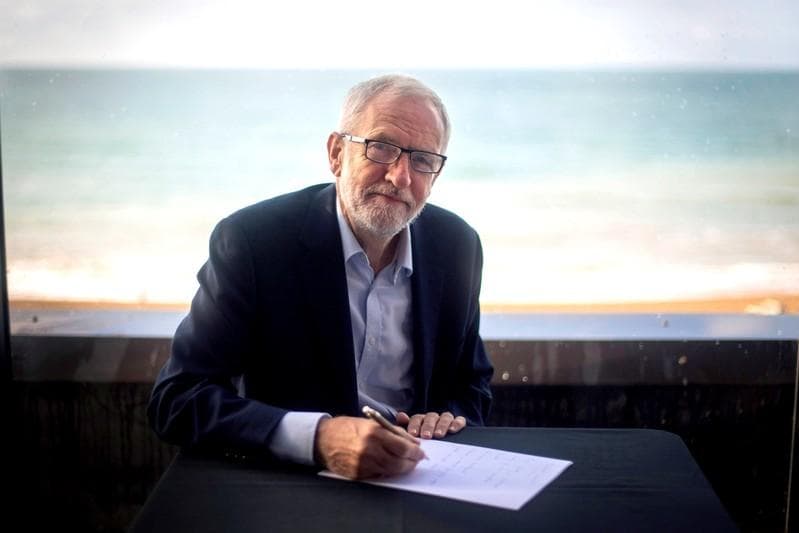 BRIGHTON, England (Reuters) - Opposition Labour Party leader Jeremy Corbyn called on Prime Minister Boris Johnson on Tuesday to resign, but said he would not press for a new election until he was sure Britain would not leave the European Union without a deal.

Corbyn said he would do all he could to ensure that Johnson takes a so-called no-deal Brexit "off the table", setting up an uncomfortable showdown for the prime minister, who insisted he would still oversee Britain's departure on Oct. 31.

A Supreme Court ruling that Johnson's move to suspend parliament was unlawful has set up a standoff on Wednesday, when lawmakers will return to Westminster and try to force the prime minister to reveal his plans and rule out a no-deal Brexit.

Corbyn said Johnson's government would be held to account.

"Tomorrow parliament will return. The government will be held to account for what it has done. Boris Johnson has been found to have misled the country. This unelected prime minister should now resign," Corbyn told his party's annual conference in the English seaside resort of Brighton.

To thunderous applause, standing ovations and shouts of "Johnson out!", Corbyn said: "That would make him the shortest serving British prime minister in history and rightly so. His is a born-to-rule government of the entitled who believe that the rules they set for everyone else don't apply to them."

The mood in the hall was enthusiastic - a sharp contrast from a day earlier when Corbyn was criticised by some pro-EU lawmakers for pushing through his Brexit strategy - to try to win an election, and then hold a special conference to determine how Labour should campaign in any second referendum.

Corbyn is just one of several opposition lawmakers to increase the pressure on Johnson, whose hardline strategy to take Britain out of the European Union, with or without a deal, on Oct. 31 appeared to be unravelling after the court ruling.

A spokesman for Corbyn said Labour was discussing all possible ways to force Johnson to respect a law which forces him to request a delay to Brexit if no deal is struck with Brussels at an EU summit on Oct. 17-18.

Downing Street sources said Johnson would not quit, but the prime minister will face an angry parliament on Wednesday, where lawmakers will try their utmost to prevent him from orchestrating a no-deal Brexit.

But the question is whether the opposition will be able to work together. One Labour lawmaker said the opposition party would "make him (Johnson) wriggle on his own hook" rather than move for a no confidence vote.

Corbyn again said he wanted an election, but only after parliament had ensured it can prevent a no-deal Brexit, a scenario he described as a "Trump Deal Brexit" that would leave Britain in hock to the U.S. president.

"This crisis can only be settled with a general election," he said. "That election needs to take place as soon as this government's threat of a disastrous no deal is taken off the table."

In what was unashamedly a campaign speech before an election widely expected to come before the end of the year, Corbyn promised he would be a "different kind of prime minister" and urged his party to get ready to "put the people in power".

"The Labour government I lead will take on those who really run our country - the financial speculators, tax dodgers and big polluters - so the real wealth creators, the people of this country, can have the jobs, services and futures they deserve," he said.

Corbyn said: "So obey the law, take no deal off the table, and have an election to elect a government that respects democracy, that respects the rule of law and brings power back to the people, not usurps it in the way that Boris Johnson has done."