By Richard Cowan WASHINGTON (Reuters) - U.S. Senate Republican leaders and White House officials tried to hammer out a proposal for a fresh round of coronavirus aid on Thursday, which officials said will not include a payroll tax cut and could reduce an enhanced unemployment benefit 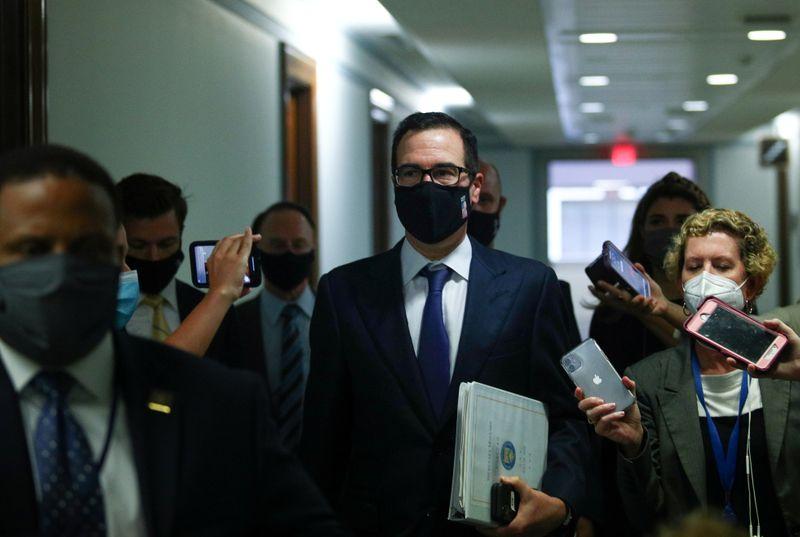 WASHINGTON (Reuters) - U.S. Senate Republican leaders and White House officials tried to hammer out a proposal for a fresh round of coronavirus aid on Thursday, which officials said will not include a payroll tax cut and could reduce an enhanced unemployment benefit.

Republicans have been trying for days to agree on a negotiating position, a preliminary step to hashing out details with Democrats who control the House of Representatives, which in May passed a proposed $3 trillion response plan that the Senate declined to take up.

The talks continue as U.S. coronavirus cases passed the 4 million mark, a milestone of a pandemic that has killed more than 143,000 Americans and thrown tens of millions out of work.

Treasury Secretary Steve Mnuchin and White House Chief of Staff Mark Meadows met with Senate Majority Leader Mitch McConnell on Capitol Hill, a day after hammering out Republican agreements in principle on portions of a potential coronavirus-response bill, which could be presented to Democrats as early as this week.

"We've finalized the appropriations. We’re just going over some of the final text that went back and forth last night," Mnuchin told reporters.

Mnuchin said that if officials can't get everything done at once, some items should be prioritized, including an extension of unemployment insurance, aid to schools and liability protections for businesses reopening.

Instead of continuing a weekly $600 enhancement of unemployment benefits that expires on July 31, Mnuchin said Republicans were looking at replacing 70% of wages. "We're not going to pay people more to stay home than to work," he said.

However, the idea of doing a partial instead of a comprehensive coronavirus aid bill was shot down by Democrats from both sides of the Capitol.

"We cannot piecemeal this," House Speaker Nancy Pelosi said at a news conference.

Democrats want to keep the enhanced unemployment benefits, and Senate Democratic Leader Chuck Schumer scoffed at the divisions that have thus far prevented Republicans from presenting a united proposal.

"Republicans are fighting with themselves over how much to cut unemployment benefits," he said.

The draft Senate Republican plan was expected to include direct payments to Americans totaling $1,200 for individuals and $2,400 for couples, according to a senior Senate aide.

Asked whether a payroll tax cut would be included in the proposal being put forth by Senate Republicans, Mnuchin said: "Not in this, but we're going to come back. ... One of the problems with the payroll tax cut is it takes time, so we are much more focused right now on the direct payments."

Mnuchin told reporters the proposal being worked out by Senate Republicans will include $16 billion in new funding for coronavirus testing, for a total of $25 billion. He also said this might not be the last coronavirus aid package.