By Philip Pullella VATICAN CITY, (Reuters) - Pope John Paul II promoted ex-U.S. Cardinal Theodore McCarrick in 2000 despite rumours of his sexual misconduct, a Vatican report found, one of a series of failings by popes and officials who let him rise through the ranks regardless of repeated allegations against him. 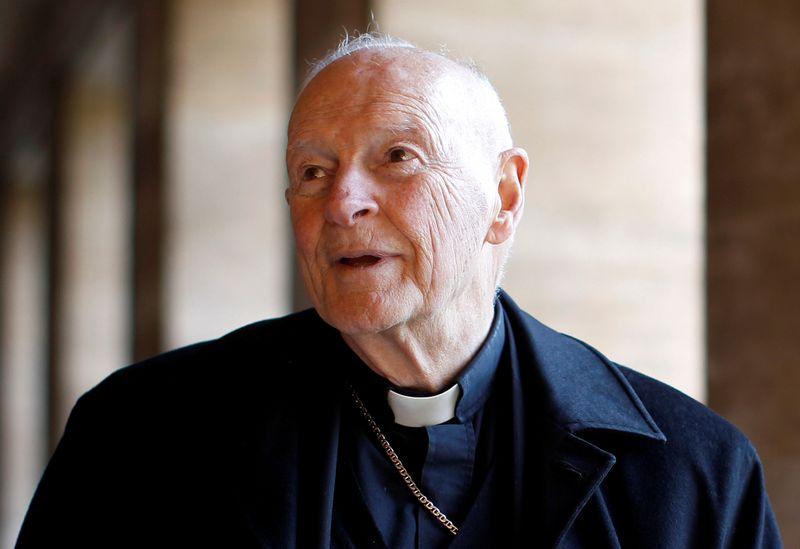 VATICAN CITY, (Reuters) - Pope John Paul II promoted ex-U.S. Cardinal Theodore McCarrick in 2000 despite rumours of his sexual misconduct, a Vatican report found, one of a series of failings by popes and officials who let him rise through the ranks regardless of repeated allegations against him.

McCarrick, a highly influential figure in the American Church, was expelled from the Roman Catholic priesthood last year after a Vatican investigation found him guilty of sexual crimes against minors and adults and abuse of power.

With testimony from 90 witnesses and dozens of documents, letters and transcripts from Vatican and U.S. Church archives, the 450-page document offers a remarkable reckoning by an institution known for its secrecy, portraying a man long able to convince superiors of his innocence.

Even the current pope, Francis, was questioned for the report, which the Vatican said he ordered to be published "for the good of the universal Church".

The report said that "credible evidence" that the former archbishop of Washington, D.C. had abused minors when he was a priest in the 1970s did not surface until 2017.

But it said the U.S. Church hierarchy was aware of consistent rumours that after McCarrick became a bishop in the early 1980s he preyed on adult male seminarians.

"During extended interviews, often emotional, the persons described a range of behaviour, including sexual abuse or assault, unwanted sexual activity, intimate physical contact and the sharing of beds without physical touching," the report's introduction says.

McCarrick has said he had no recollection of child abuse and has not commented publicly on allegations of misconduct with adults. Now aged 90, he is living in isolation.

Barry Coburn, McCarrick's lawyer, said in an email that there would be no comment.

The report has gained significance since it was ordered by Pope Francis in 2018 and one of McCarrick's alleged victims has since sued the U.S. Church in a trial expected to home in on what officials knew.

Anne Barrett Doyle, co-director of the abuse tracking group BishopAccountability.org, called it "the most significant document on the abuse crisis to come from the Church," particularly the revelations about Pope John Paul.

But she said Pope Francis should have done more and the report lets him "off the hook."

The report said there was "no credible information" suggesting misconduct before McCarrick's appointments in the 1980s, but that in hindsight, the Vatican's investigations of later allegations against McCarrick were of a "limited nature".

In 1999, Cardinal John O'Connor advised Pope John Paul II that it would be imprudent to promote McCarrick because of "rumours" of sexual misconduct with seminarians in Metuchen and Newark dating back to the 1980s.

An investigation by the Vatican ambassador to the United States, requested by John Paul, "confirmed that McCarrick had shared a bed with young men" but said there was no certainty that he had engaged in sexual acts.

On Aug. 6, 2000, McCarrick wrote to Pope John Paul's private secretary to rebut the allegations made by Cardinal O'Connor.

In November, 2000, Pope John Paul appointed McCarrick archbishop of Washington, D.C., one of the most prestigious posts in the U.S. Church. There, he hobnobbed with world leaders and shone as a star fundraiser for the Church.

The report said investigations in 2019-2020 determined that three of the four bishops had provided "inaccurate and incomplete" information about McCarrick's sexual conduct. The omissions "impacted the conclusions of John Paul II's advisors and, consequently, of John Paul II himself," the report said.

It went on to say the Vatican never received a direct complaint from a victim and it was plausible, given the information it had, to "characterise the allegations against him as 'gossip or 'rumours'".

John Paul died in 2005 and was declared a saint in 2014. The report said his willingness to believe McCarrick's denial was likely influenced by his experience in his native Poland when the communist government used "spurious allegations against bishops to degrade the standing of the Church".

The Vatican, then under newly-elected Pope Benedict XVI, told McCarrick he should withdraw as bishop after it became aware of more information from a victim identified as "Priest 1", the report said.

In 2008, three top Vatican officials suggested the pope approve a canonical investigation "to determine the truth and, if warranted, impose an 'exemplary measure'".

A Vatican official instead asked McCarrick to "maintain a lower profile and minimise travel for the good of the Church". But, because there were no "explicit instructions from the Holy Father" (Pope Benedict), McCarrick continued public activities.

The report says Benedict likely rejected the idea of an investigation because there were "no credible allegations of child abuse", because McCarrick had sworn on his oath as a bishop that he had not sexually abused anyone and "there was no indication of any recent misconduct" (with adults).

After he was elected in 2013, Pope Francis became aware of "allegations and rumours" concerning McCarrick's past behaviour, the report said.

"Believing the allegations had already been reviewed and rejected by Pope John Paul, and well aware that McCarrick was active during the papacy of Benedict XVI, Pope Francis did not see the need to alter the approach that had been adopted in prior years," the report says.

Archbishop Carlo Maria Vigano, a former Vatican ambassador, has accused Francis of allowing McCarrick to continue his travels and lifting "sanctions" he said were imposed by Benedict. The Vatican has said there were no formal sanctions.

The report said no documentation of any abuse by McCarrick was given to Pope Francis before 2017, when McCarrick was accused of abusing a minor in the 1970s, leading to the Vatican investigation that led to his expulsion from the priesthood.