By Oswaldo Rivas and Ismael Lopez JINOTEGA, Nicaragua/MANAGUA (Reuters) - Grieving relatives in northern Nicaragua on Friday buried the body of a Nicaraguan agricultural laborer whose death from a heat stroke in Spain this month triggered a debate about working conditions of undocumented migrants in Europe. 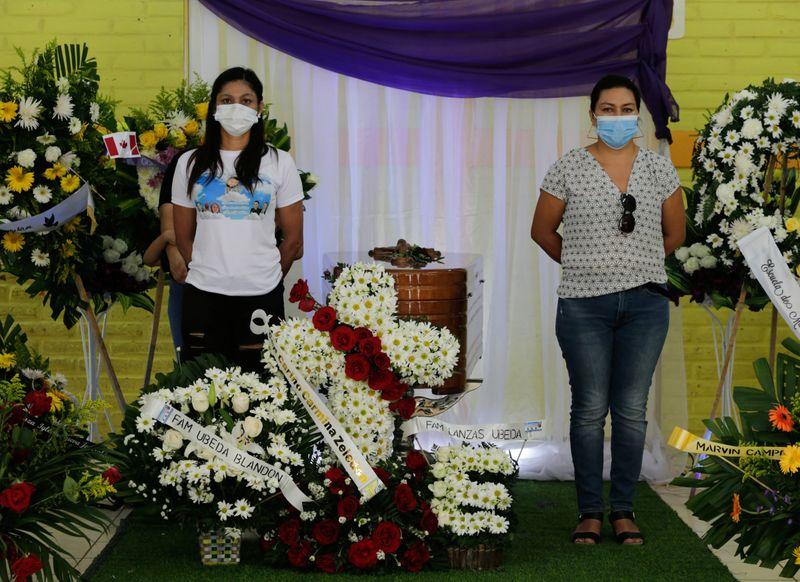 By Oswaldo Rivas and Ismael Lopez

JINOTEGA, Nicaragua/MANAGUA (Reuters) - Grieving relatives in northern Nicaragua on Friday buried the body of a Nicaraguan agricultural laborer whose death from a heat stroke in Spain this month triggered a debate about working conditions of undocumented migrants in Europe.

Eleazar Blandon, 42, was buried in his home town Jinotega several weeks after his death in Spanish watermelon fields drew media coverage and criticism about the work environment of migrants in wealthy European nations.

"Now you are going to rest in peace, after such a long journey," said Blandon's brother, Kamil, during the funeral service which saw musicians trail the coffin through the streets of Jinotega.

Kamil lamented the family's tragic history repeating itself, as four years earlier their father, an undocumented migrant in the United States, had also died working on a farm in Texas.

Toiling in extreme Spanish heat and sun when he collapsed, the father-of-five was taken to a nearby hospital in the south-eastern city of Murcia, his sister Ana Blandon, also an undocumented worker, said in a telephone interview from Spain.

She said her brother was left at the hospital's entrance and died there. Two family members, one in Nicaragua and one in Spain, confirmed various details of her account.

Reuters could not independently verify the events.

Spanish authorities said they are investigating the farm, which could not be contacted by Reuters.

Blandon was among about 26,000 Nicaraguans who last year left their homeland for Spain. Many fled amid weak economic growth and political gridlock following the 2018 protests against the government of President Daniel Ortega, in which 326 people were killed.

Blandon started laboring in Spanish watermelon fields after losing another job during the coronavirus pandemic.

Spanish Labor Minister Yolanda Diaz called the conditions under which Blandon worked "deplorable" and his death "a tragic, dramatic event that speaks very badly of our country" at a press conference on Aug. 6.

"His workday started at 7 a.m. and lasted 14 hours during which he was harvesting melons until the afternoon at 44 degrees (Celsius) without any protection," she said. "He died from hypothermic stress."

One musician at Blandon's funeral wore a t-shirt saying: "It's not work, it's slavery."

(Reporting by Oswaldo Rivas in JINOTEGA and Ismael Lopez in MANAGUA; Writing by Stefanie Eschenbacher; Editing by Drazen Jorgic and David Gregorio)