Editor's Note: These days, refugee crisis is an oft-heard term. Ever since German chancellor Angela Merkel's famous 2015 "Wir schaffen das!" (We'll manage it) speech, Germany has emerged as the European nation taking in the most number of refugees. Firstpost's Nimish Sawant travelled to its capital Berlin, as part of the Robert Bosch Foundation's India - Germany Media Ambassadors program, to see how refugees are trying to integrate into German society. This process goes much beyond just learning the language and knowing the customs and traditions. While some are trying to keep their culture alive in a foreign land, others are building a case for talented migrants in a society that is ageing fast. While some hope to go home when the situation improves, others prefer building their lives anew. This article is part one of the five-part series which will explore the stories of refugees living in Berlin.

As soon as you enter the building housing the ReDI School of Digital Integration, you are received by a robot made of brown packaging boxes. The robot spells out different technologies from Internet of Things (IoT) IoT to Artificial Intelligence (AI) to Robotics, preparing you to enter this school of digital learning.

ReDI has an open floor plan. Despite the white walls, there is a lot of colour in the room. Be it the red-coloured tent house meant for brainstorming sessions, the bright-coloured notice board or pictorial charts showing the before and after story of the students who have escaped their war-torn countries and are called refugees.

But at ReDI, this bunch of youngsters are more than statistics on a sheet. They are talented individuals, augmenting their love for technology with professional training which will prepare them for the German technology-related job market, requirements for which has grown by 18 percent over past year.

Anne Riechert, the founder of ReDI, began mulling over this idea in the summer of 2015. After starting the Peace Innovation Lab in 2012, she formed a community of around 1,800 individuals working in private industry, NGOs and startups. Anne Riechert, the founder of the ReDI school.

"In 2015, when the refugee crisis was the subject of much debate in Germany, we brought our community together to see how technology could help people who were arriving. We went to many refugee camps to understand their needs and see how we could help them," says Riechert.

It was at one of the refugee camps in North Berlin, that Riechert met Mohammed Kareem, an IT engineer from Baghdad University, Iraq, who would spark the idea for ReDI.

"Mohammed told me he could not continue programming as he did not have a laptop. That really motivated us to collect laptops and help refugees who wanted access to them. But in the span of 24 hours, we realised that laptops are not really a solution. We also needed to provide teachers who can educate them and help build networks, which in turn, would help them with integration,” Riechert adds.

Using incoming talent and making them job-ready seemed like the logical solution. After all, the demand for information technology (IT) professionals has grown from 43,000 to 51,000 over the past two years.

"The idea was to create a win-win situation where German society, companies and the refugees benefited. That would make this venture sustainable in the long run," says Riechert.

This set the ball rolling. By February 2016, ReDI started its first batch: 42 students. That number has only grown. Today, 115 students study around 10 courses, with 13 women studying a course tailored for female refugees who may not be fluent in IT.

ReDI has two semesters of three months each, in spring and summer. Each week sees two or three classes in a particular course. Media attention also helped ReDI nab several interested partners who were willing to donate cash or equipment such as laptops and desktops. In fact, a table at the school is dedicated to reusable laptop and computer parts.

It's free! ReDI is a non-profit. Prospective students need to write a statement of purpose and fill in an online application form. The school then shortlists worthy candidates and holds an introduction session where students are told about the school and its various offerings. Finally, there is a 15-minute interview with students to gauge their interpersonal skills. Only then is final list drawn up.

Knowing German isn't a requirement. However, students need to be fluent in English. "We teach in English, so it is expected that the students understand English to a relatively fluent level. In Berlin, the tech industry is extremely international and especially in the startup world, people from various countries come to work," adds Reichert.

Thirty-one-year-old Khawar, a student from Pakistan, is currently doing his fourth course at the ReDI. According to him, if most of the work is done on computers, one can get by with knowing English and a bit of German. "But in a job profile where you are interacting with customers such as in the hospitality industry or even at the supermarket, you need to know German," he says.

Khawar, who loves studying business and computer programming-related subjects, is also helping set up a small library at ReDI. His backgrounds helps: He worked as a librarian in Pakistan for six years. Not only did Khawar gain from ReDI, he also volunteers his expertise. Nine past graduates are also teaching at ReDI. Two of them have also developed a multilingual curriculum.

Kareem, who was in a way, instrumental to the formation of the school, is also an instructor. He teaches the course on ‘Android app development’ twice a week, while also working as an intern at a business management school.

According to Riechert, many refugees who come to Germany are working professionals. "But once in Germany, the integration process means that many may have to start from scratch." According to statistics from the Federal Employment Agency, around 4,84,000 refugees are looking for work, a figure that is up by 50 percent this year. 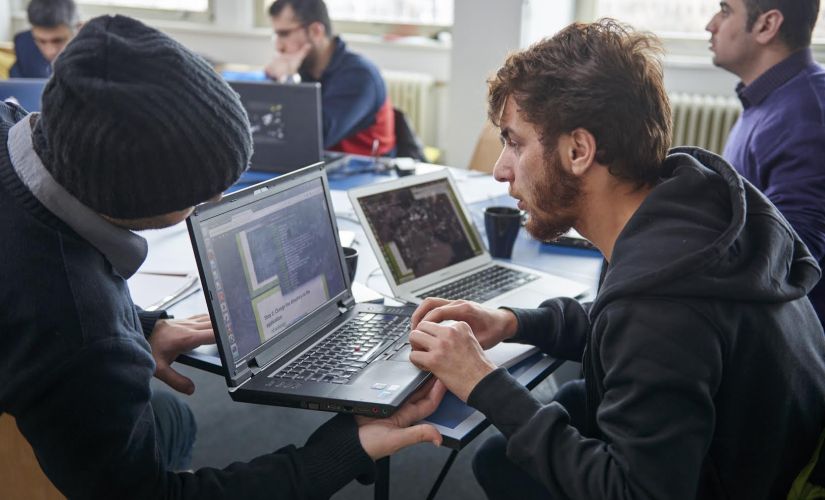 Students at the ReDI School in Berlin help each other out in completing their projects. Image courtesy: ReDI School

The response from the tech industry has been mainly positive. But not all graduates of ReDI have managed to find work. Riechert also says a few German tech companies are so desperate to hire, professional know-how is all they care about.

If they find value in someone, they invest in them, she adds, citing the example of Rami, a 23-year-old former student of ReDI currently working with as an operations manager with steel company Kloeckner. The company has sponsored Rami's German classes, she says.

Reichert says that ReDI's motto is: "Hire for motivation and attitude. Train for the job". Even German university students have had to undergo training before they are job ready, she says.

"A lot of students already know a couple of languages, including Arabic, Farsi and English. Over the years they will also learn German. So after a year or two, you have an IT talent who is fluent in four languages and a good programmer. If you invest in them now, you will be building a pipeline of talent going forward. That's a huge win for employers," says Reichert. She also stresses that students are adapting to new surroundings on a daily basis, an aptitude that can be a huge advantage in the constantly changing world of IT.

Among the student pool that has graduated from ReDI or is currently studying, over 70 percent are university graduates from around the world. Two-third of these have studied computer science or subjects relating to computer science. Others like 24-year-old Mohammed Ahmed come from a non-IT background.

Ahmed, studied architecture in Syria for seven semesters. Then it became difficult for him to finish his education. Ahmed has been living in Germany for the past two years. He wants to study IT. To prepare for university, he graduated in 'Data Analytics' and is currently studying the ‘Fundamentals of Programming’ at ReDI. Ahmed wanted to study IT in Syria, but he could not clear the cut-off. He is giving his dream another shot in Germany and is grateful for the help offered by the ReDI: Inside and outside school.

Students are provided with help even after they graduate from ReDI, in case they want to work on their soft skills or need interview training or CV training. Paulina, head of career navigation at ReDI, acts as an interface between companies and students.

“We have 400 students. We know their backgrounds, so it is easier for us to identify which student would be a good fit with which company," says Riechert.

Riechert says ReDI graduates are getting a positive response from the industry. Cisco has hired six students, SAP has hired two, Kloeckner has hired two, one student is working with Fraunhofer Fokus.

"We have an ongoing conversation with the industry. We focus on ensuring that students get jobs. It helps make a great case study for other companies as we can then demonstrate that refugees are also quite talented and they should be given opportunities," says Riechert.

'We aren't an incubator'

Four startups have emerged from ReDI, but Riechert says the school not an incubator. Bureaucrazy, their most popular startup, has secured €20,000 in funding.  It helps refugees make sense of the German bureaucratic processes. Riechert is aware that most of her students, if not all, will not succeed in becoming entrepreneurs. "It is a risky business. You need the right amount of capital, networking skills, cultural understanding, language know-how. These are not necessarily the skills that our students have at the moment. They will get there eventually, but not right away," says Riechert.

Even as we discuss the school's success stories, one question comes to mind: Can ReDI spread its wings to other cities?

Riechert says she received requests to start ReDI schools in Munich, Stuttgart, Frankfurt, Darmstadt, Hamburg, Barcelona and Dublin. While expansion is part of the strategy, there are certain criteria such as sustained funding that are necessary. ReDI school is looking at expanding to Munich this November.

“There are a lot of cities that want us to start schools but it important we find the right financial partner. For example, municipalities which see us as an integration tool or companies which are looking for talent and are considering investing in the refugee community," she says.

It is 8.30 pm. A few classes have wrapped up. Khawar is back to his machine in the library, Ahmed is getting ready to leave and other students are conversing with their teachers, intent on clarifying any lingering doubts.

"I just hope this kind of model is adopted by other industries as well. This kind of integration will certainly be advantageous to Germany," Riechert says.

The average German is between 43 and 45 years old. Germany is an ageing society. It could certainly use young refugees. It's simply a matter of giving them confidence, the right tools and the opportunity to succeed.

ReDI is working towards that tirelessly. One day at a time.