By Aislinn Laing and Fabian Cambero SANTIAGO (Reuters) - Chileans turned out in record numbers on Sunday to vote on whether to tear up the country's Pinochet-era constitution in favor of a fresh charter drafted by citizens - a key demand of fierce anti-government protests that erupted last year. 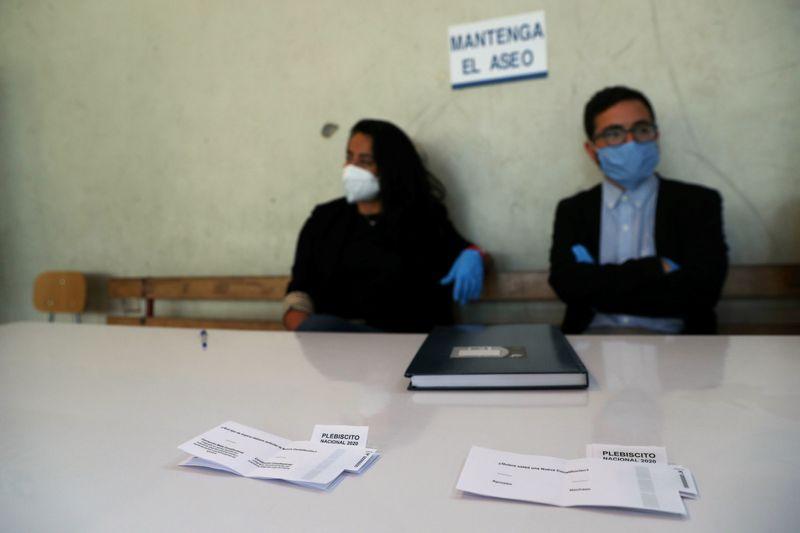 By Aislinn Laing and Fabian Cambero

SANTIAGO (Reuters) - Chileans turned out in record numbers on Sunday to vote on whether to tear up the country's Pinochet-era constitution in favor of a fresh charter drafted by citizens - a key demand of fierce anti-government protests that erupted last year.

Electoral and government officials and analysts pointed to a particularly high turnout and significant representation of young people among voters, despite Chile continuing to be blighted by the coronavirus

pandemic and recent violence linked to the demonstrations.

As dusk fell, police fired tear gas and water cannon to try to disperse hundreds of people who gathered in Plaza Italia, the central Santiago square that has been the focus of protests. The officers later appeared to stand down as the crowd grew with more people arriving to celebrate the likely result.

Patricio Santamaria of the Servel elections body said turnout would probably exceed 49% - the highest level recorded since voting was made voluntary in 2012. "Today, people have heard the call of history," he said.

Claudio Fuentes, a political scientist at Chile's Diego Portales University, said the months of protests had served to reverse a downward trend in voting engagement.

"I think we could see turnout of around 55 to 58%," he said. "The more people who vote, the more legitimate and overwhelming the result."

Few Chileans are indifferent to the outcome of the referendum, and opinions were strongly-held among voters polled by Reuters on Sunday.

Natalia Ramos, 43, a kindergarten teacher who voted in favor of a new constitution in Santiago's affluent Las Condes suburb, praised the protests that began a year ago over patchy public services and societal inequity, saying they had brought about radical change.

"The protests were unfortunately violent but history tells us that without violence, there is very little we can achieve to bring about important revolution - they raised awareness of the inequality of the past 30 years," she said.

Jose Tomas Olivares, 18, voting for the first time at the same polling station, said only the current, free-market friendly constitution could safeguard the economic growth required to uplift more citizens.

"There is a lot of populism among young people but many people are voting to approve a new constitution just to be part of a trend," he said.

More than 14.8 million people are eligible to vote up and down the long thin country, although COVID-19

sufferers have been told to stay away from polling centers on threat of arrest.

Chileans can decide whether to approve or reject a new constitution and whether it should be drafted by a specially elected citizens' body or a mix of citizens and lawmakers.

The winning camp needs a simple majority. Opinion polls suggest a new charter will be approved by a significant margin. First results are due between 8:30 p.m. and 9:30 p.m. local time, according to Servel.

Unofficial results from votes cast by 5,208 Chileans living in Europe and Asia, tallied by Diego Portales University, showed more than 87% voted in favor of a new constitution.

The country's current constitution was drafted by dictator Augusto Pinochet's close adviser Jaime Guzman in 1980, and has only been tweaked by successive governments to reduce military and executive power.