By Rich McKay (Reuters) - A heat wave with record-breaking potential gripped the southeastern United States on Monday, while the Central Plains will get a respite from the deadly weather that has pounded and flooded the region since last week, forecasters said. But the conditions for violent weather that spawned numerous tornadoes and drenching rains that prompted several riverfront evacuations will return in the coming week, they said 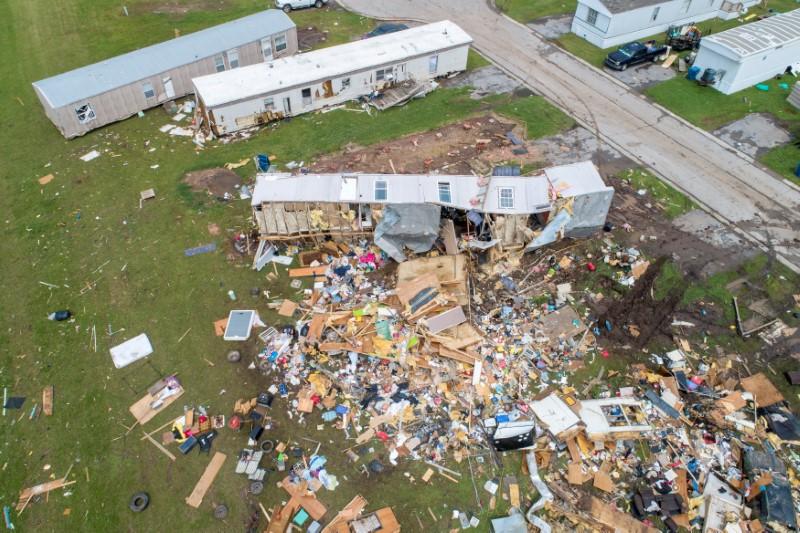 (Reuters) - A heat wave with record-breaking potential gripped the southeastern United States on Monday, while the Central Plains will get a respite from the deadly weather that has pounded and flooded the region since last week, forecasters said.

But the conditions for violent weather that spawned numerous tornadoes and drenching rains that prompted several riverfront evacuations will return in the coming week, they said. A tornado in Oklahoma killed two people on Saturday.

As Americans celebrate the Memorial Day holiday, the National Weather Service (NWS) said 14 cities in South Carolina, Georgia and northern Florida could tie or top their previous high temperatures for this date in a hot spell that could remain in place through the week.

They include Atlanta with an expected high of 96 degrees Fahrenheit (36 degrees Celsius) and Jacksonville, Florida, and Columbia and Charleston, South Carolina, where highs could hit about 100 degrees F (38 C).

"We are expecting triple-digit readings for a good chunk of the southeast United States," said meteorologist Brian Hurley at the NWS Weather Prediction Center in College Park, Maryland.

In Oklahoma, where the city of El Reno is still cleaning up from the tornado that killed two people and injured 29 on Saturday, chances for violent thunderstorms have diminished until late Monday or early Tuesday, he said.

The pattern of drenching thunderstorms and tornadoes, which has been recurring in the Central Plains states since last week, has caused flooding in several river cities.

In Tulsa, Oklahoma, officials are monitoring the rain-swollen Arkansas River after the U.S. Army Corps of Engineers raised the flow at the upriver Keystone Dam by 65% since last week to 275,000 cubic feet per second.

The heavier flow, which is testing two aging levees in Tulsa, is still less than the 300,000 cubic feet per second high flow for the dam in 1986, the City of Tulsa said.

All 77 Oklahoma counties are under a state of emergency, a spokeswoman for the Oklahoma Department of Emergency Management said.

(Reporting by Rich McKay in Atlanta and Peter Szekely in New York; Editing by Bill Tarrant and Matthew Lewis)