Real tragedy of Dallas: Callous disregard that US has for the lives of black Americans

Since Thursday these words sound like a broken record, played in a loop in the aftermath of the deadliest police incident since the 11 September attack on the twin towers. Each of these words is at once relevant and inadequate. As we playback, the soft pop-pop-pop of the bullets and screams of people running for their lives, we each experience the sinking feeling of abject horror.

But it does not end there.

The true horror of Dallas runs much deeper, and has affected each of us in profound and significant ways. The real tragedy lies not with the bloodshed on Griffin street, but with the blood on our own hands. As a society, we have struggled to deal with the complex history and modern expressions of race relations in this country; a country forged with the labor and lives of enslaved black humans. It would be a grave misstep to forget that many American institutions and economies were built on backs scarred from whips, bent from the cotton fields. It is not a pleasant history, not one that we want to examine or remember too closely, and it is all too easy to shrug off the weight of remembrance, to remind ourselves, to believe, that no one alive today has taken part in the shameful institution of slavery. Free of this sense of moral responsibility, however, we have allowed ourselves to believe that, because slavery has ended, it has become irrelevant. It has not. 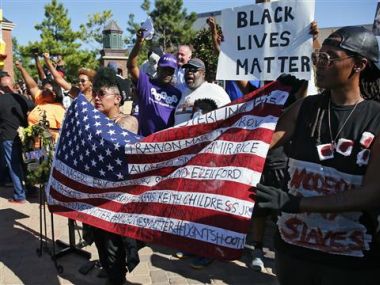 Protesters during a Black Lives Matter rally in in Oklahoma City. AP

It is shallow and ignorant to believe that our history with slavery is not deeply connected to how we experience race in society today. A bitter battle was fought to maintain the status quo, and in many ways that battle was won. Segregation is still a reality, economic precariousness and homelessness still plagues many and the average life expectancy is lower. The value of black bodies and black lives has not increased with buying power and voting rights. The black community has had to scratch and fight for even the smallest place in a society that refuses to admit just how much it still values whiteness. While no longer physically in chains, the black community is still constrained by the shackles of racism and oppression.

Whiteness in America is more than a privilege, it is insurance. It is insurance that, as a white person, my problems will be met with concern, that my future will not be dismissed, that my anger will be heard instead of stereotyped, and that the police will ask first. And yes, many may rightfully say that class plays its part and that poor white Americans suffer in many of the same ways. While this may be true in the sense that poor white Americans live shorter lives, have more health problems, fewer educational and job opportunities, and are similarly locked in a cycle of poverty, it is also true that even here, whiteness protects. Whiteness may be the difference between homelessness and housing, it may be the difference between a paycheck and unemployment. In interactions with police, it may be the difference between life and death. Whiteness in America is the first shield with which we are born.

What happened this week in Dallas was more than one angry black veteran waging war on white people and our police force. It was an expression of anger over the inestimable number of black lives lost at the hands of White America. It was an act born not of blind hatred, but of abundant awareness and desperation. Within a system that routinely turns a deaf ear to the pain of the black community, this act demanded to be heard. And the real effect was not immediate, it was not the deaths of our officers; the real effect was realized in the following days, as the nation stood up and grieved for the lives of the officers in a way that they had refused to grieve for the lives of two black men just days before. The shooting in Dallas, awful and unforgivable, has (inadvertently or not) highlighted the callous disregard that this country has for the lives of black Americans. This disregard is exactly what enables the casual murder of black people to continue unabated.

Until we, as a society, recognize our complicity in the destruction of the black community in America, there will be more Alton Sterlings, more Sandra Blands, and more Trayvon Martins. Black men, women, and children will continued to be murdered by our ignorance and dispassion, and they, as all humans must do, will continue to rise up and fight against their oppression. As long as we continue to tolerate a police force that shoots black men in the back, breaks their necks, and fails to protect them, and a society that accepts this, anger at this system will continue to simmer until it boils over in violent rage.

The answer is not to react with blind outrage and condemnation of the Dallas shootings. There is no question that the lives of those officers should not have been lost, there is no question that the attack resulted in broken families and a deep communal loss. To suggest otherwise would be to take away their humanity, and that cannot be the answer. To stop at outrage, however, is to take away the humanity of the black community. It is to deny that the fear, anger, and desperation that precipitated the shootings was not a product of our collective failure to protect and value black lives. To approach the Dallas shootings as a tragic murder of police officers is to forget that that it also represents a great tragedy for the black community; a tragedy that American society refuses to recognize even as it claims lives, ruins homes, and breaks communities.

Instead, we must admit collective fault, give up our defensive position, and use our power and privilege to dismantle the racist institutions that keep equality at bay. We must understand this attack, and we must work to ensure that there is no reason to hate the police, or the white community, in America. We must each look inside of ourselves and change our communities from the bottom up, because de jure equality will never be strong enough on its own to ensure de facto equality. It is possible to both condemn and examine this tragedy and, more than that, it is necessary and it is our responsibility. The cycle can only, and must, end with us.