ATHENS (Reuters) - A rare storm, known as a Medicane (Mediterranean hurricane), pounded western Greece on Friday, flooding streets, uprooting trees and causing power cuts in the Ionian islands of Kefalonia, Zakynthos and Ithaca, and in areas of the western Peloponnese. The fire brigade said it had received more than 600 calls for assistance, mainly to cut down trees and pump water out of homes and stores. In Kefalonia and Lefkada, sailing boats sank. 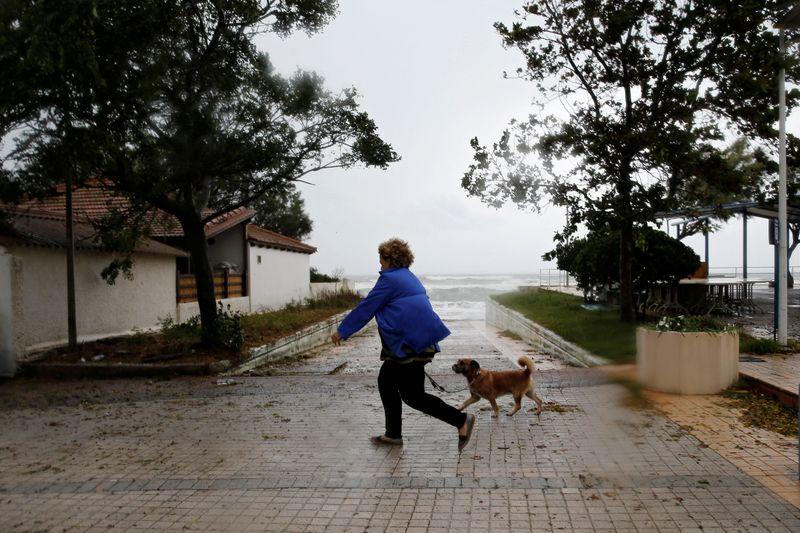 ATHENS (Reuters) - A rare storm, known as a Medicane (Mediterranean hurricane), pounded western Greece on Friday, flooding streets, uprooting trees and causing power cuts in the Ionian islands of Kefalonia, Zakynthos and Ithaca, and in areas of the western Peloponnese.

The fire brigade said it had received more than 600 calls for assistance, mainly to cut down trees and pump water out of homes and stores. In Kefalonia and Lefkada, sailing boats sank.

Kefalonia Mayor Theofilos Michalatos said no one was hurt but homes, road infrastructure and water facilities had been damaged. The impact was similar in Zakynthos and Ithaca, where power cuts were also extensive.

The electricity grid was struggling to cope, and efforts were being made to restore power in affected areas.

The storm, named Ianos, reached the western Peloponnese peninsula around midday. Meteorologists said it appeared milder than initially estimated, and forecast it would move south after pounding the area with heavy rainfall.

"We have been getting people stuck in flooded basements out," Efthymis Karaiskos, mayor of Lamia in central Greece where heavy rainfall and strong winds also caused problems, told Skai TV. Parts of national roads in the area were also closed.

A Reuters witness said there was heavy rainfall in the area of Pyrgos in the western Peloponnese, where the streets were empty, and strong winds. A vessel in the Gulf of Kyparissia sent a distress signal, but the coastguard said weather conditions prevented a rescue operation.

"The cyclone will remain west, with the same intensity for 6-9 hours and then, weaker, will start moving to the south," Deputy Citizen Protection Minister Nikos Hardalias said.

The storm would also hit central Greece, where heavy rain was expected, Hardalias said, before reaching the wider Athens region on Saturday.

Authorities said the intensity and course of the cyclone could not be accurately predicted. Such cyclones first appeared in Greece in 1995 and have become more frequent in recent years. A similar storm hit Greece in 2018.