"He who fights with monsters should be careful lest he thereby become a monster."

Something the CIA definitely did not heed. In a landmark report by the Senate Intelligence Committee, it condemned the CIA's use of enhanced interrogation techniques on its detainees that were "far more brutal" than represented. 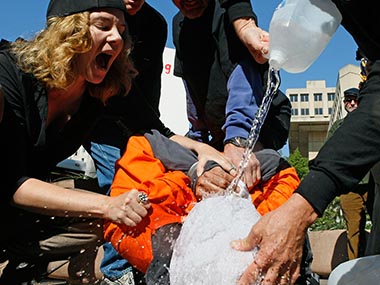 President Obama ended the CIA's rendition and interrogation program more than five years ago, the Senate Intelligence Committee released its report on the agency's methods on tuesday.

Here are eight of the most shocking things detailed in the report:

1. One detainee died, apparently from hypothermia, after being chained, nearly naked, to a concrete floor

A glimpse of these techniques details how the CIA employed sleep deprivation to wear down victims. It "involved keeping detainees awake for up to 180 hours, usually standing or in stress positions, at times with their hands shackled above their heads."

Other psychological tactics involved keeping detainees in pitch-black rooms "with loud noise or music and only a bucket to use for human waste." One detainee, "who had been held partially nude and chained to a concrete floor" died in Nov. 2002 from suspected hypothermia. CIA detainees who underwent these interrogation tactics were later found to experience "hallucinations, paranoia, insomnia and attempts at self-harm and self-mutilation."

2. 26 of the detainees didnt meet the criteria to be detained. i. e:  they were innocent

The report found that at least 26 detainees “were wrongfully held,” including an “intellectually challenged” man who was used as “leverage” to obtain information from a family member, two former intelligence sources and two individuals identified as threats by a detainee subjected to torture. Agency records were often incomplete and, in some cases, lacked sufficient information to justify keeping detainees in custody. Among them was Abu Hudhaifa, who was "subjected to ice water baths and 66 hours of standing sleep deprivation" before the CIA discovered that he was probably "not the person he was believed to be."

The Senate committee found that at least five detainees were subjected to rectal rehydration or rectal feeding "without documented medical necessity." The chief of interrogations described it as "total control over the detainee." The report also notes "CIA medical officers discussed rectal rehydration as a means of behaviour control" and that a number of other detainees were threatened with the procedure.

Even though detainee Majid Khan was cooperating with feedings, for example, the CIA subjected him to "involuntary rectal feeding and rectal hydration" and would puree his lunch tray, which was then "rectally infused."

4. CIA interrogators threatened to sexually assault the mother of a detainee

Threatening detainees with threats to harm detainees' families, including threats to "sexually abuse the mother of a detainee" was a common practice, according to the summary of the report.

5. CIA officers with 'histories of violence' participated in torture

Not only did the CIA put people without adequate experience or training in senior detention and interrogation roles, many of them had documented "histories of violence and records of abusive treatment of others." In nearly all of these cases, the report reads, the CIA knew about the officers' violent and abusive behaviour before assigning them to detention and interrogation positions.

According to CIA records, Bush expressed discomfort with an image of a detainee "chained to the ceiling, clothed in a diaper."

7. Khalid Sheikh Mohammed, the mastermind behind the 9/11 terror attacks, was waterboarded at least 183 times

The CIA said the method was effective in helping CIA interrogators pull information from Mohammed, but CIA interrogators painted a different picture in interview with the CIA's inspector general, according to the Senate report. CIA interrogators and medical personnel said Mohammed "hated it but knew he could manage," and "figured out a way to deal with [the waterboard]."

Mohammed "beat the system" and one of his CIA interrogators attested that the suspected terrorist responded better to non-confrontational approaches.
Like others who were tortured, Mohammed often recanted information he told CIA officers to get them to stop the waterboarding.

8. Torture did not help the CIA find Osama bin Laden

The CIA continues to claim that coercive interrogations were crucial to capturing Osama bin-Laden, but the Senate report concludes that the most "accurate' CIA information that led to bin Laden's capture came from a detainee before the detainee was tortured.