By Brad Brooks MOLALLA, Ore. (Reuters) - A California firefighter was reported on Friday to have been killed in a blaze that started at a gender reveal party, as rainy weather brought some relief to a region that has suffered a historically devastating fire season 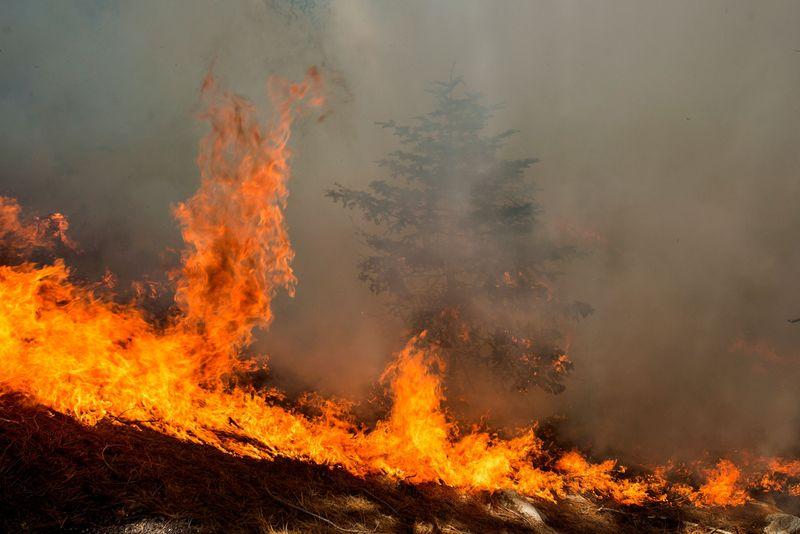 MOLALLA, Ore. (Reuters) - A California firefighter was reported on Friday to have been killed in a blaze that started at a gender reveal party, as rainy weather brought some relief to a region that has suffered a historically devastating fire season.

The firefighter died on Thursday while battling the El Dorado wildfire in California's San Bernardino National Forest, officials said on Friday. The El Dorado fire, which officials have said was started by pyrotechnics at the gender reveal party, has burned more than 21,000 acres (8,500 hectares) since the beginning of the month and was 66% contained on Friday.

"Our deepest sympathies are with the family, friends and fellow firefighters during this time," the U.S. Forest Service said in a statement posted on Twitter, adding that the cause of the firefighter's death was under investigation.

Overnight, rain in northwest Oregon and humidity over the San Francisco Bay Area bolstered hope for further containment of the dozens of deadly wildfires that have raged for weeks due to tinderbox conditions created by high winds, lightning and drought.

Cooler, more favorable weather in the region since last week has already dispelled some of the smoky, polluted air and tempered the flames, enabling ground teams with axes and bulldozers to regroup and consolidate their gains while also allowing greater use of water-dropping helicopters and airplane tankers.

The region still faces a formidable recovery from the fires, which have burned some 3.2 million acres in California since mid-August and another 1.7 million acres in Oregon and Washington state since Labor Day.

Several small towns have largely been incinerated, with thousands of dwellings destroyed and at least 35 lives lost - 26 in California including the firefighter, eight in Oregon, and one in Washington state. Thousands of evacuees, particularly in Oregon, remained huddled in emergency shelters, mobile trailers and hotel rooms.

The situation was particularly dire in that state, which is unaccustomed to wildfires of such magnitude and lacks sufficient resources to deal with them.

Oregon's firefighting force has more than doubled over the past week, with some 6,500 personnel on the fire lines. CalFire said more than 18,500 firefighters were deployed against 27 fires in the most populous U.S. state on Friday.

By the end of the week, authorities in all three states were delivering a notably more optimistic assessment.

"Milder weather is helping the fire fight as crews continue to gain ground on many of the major incidents," the California Department of Forestry and Fire Protection said in a statement on Friday.

A key sign of success in the three states' efforts to control the fires has been a steady rise in containment, a measure of the buffer lines that firefighters carve around the perimeter of each blaze by hacking away unburned vegetation to prevent its spread.