By Eric Knecht DOHA (Reuters) - The ruler of Qatar offered support for Sudan's 'unity and stability' on Wednesday at a meeting with President Omar al-Bashir on his first foreign visit in more than a month of protests against him, a statement said. The tiny but wealthy Gulf state vies with regional rivals for influence in Sudan, strategic in part for its access to the Red Sea, and last year agreed a $4 billion deal to jointly develop Suakin port. But no new financial assistance was announced on Wednesday 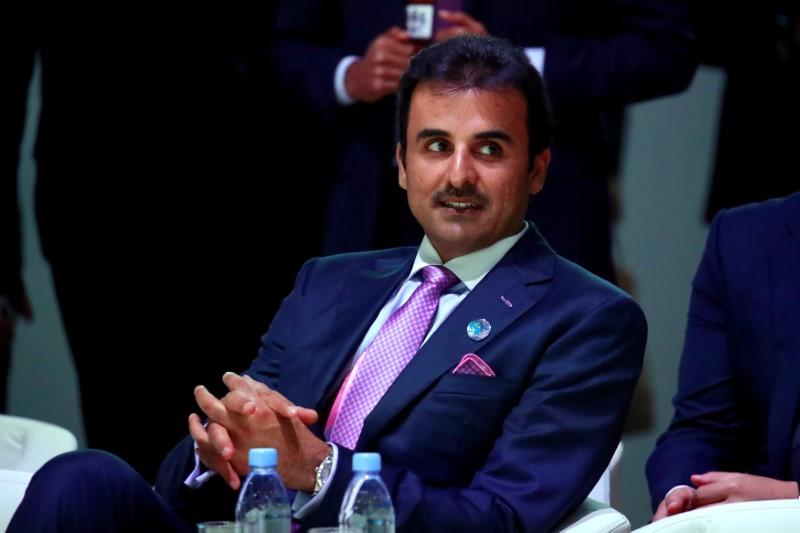 DOHA (Reuters) - The ruler of Qatar offered support for Sudan's "unity and stability" on Wednesday at a meeting with President Omar al-Bashir on his first foreign visit in more than a month of protests against him, a statement said.

The tiny but wealthy Gulf state vies with regional rivals for influence in Sudan, strategic in part for its access to the Red Sea, and last year agreed a $4 billion deal to jointly develop Suakin port.

But no new financial assistance was announced on Wednesday.

Bashir arrived in Qatar on Tuesday as protests raged at home. Anger at inflation and shortages has coalesced into calls for an end to his 30-year rule.

"President Bashir briefed the Emir on the latest updates regarding the situation and challenges facing the country," said a statement from the court of Qatar's Emir Sheikh Tamim bin Hamad Al Thani.

"The Emir affirmed Qatar's firm stance on Sudan's unity and stability, and they discussed the latest developments in the Darfur peace process."

Bashir, who came to power in a 1989 military coup, has blamed the unrest on foreign "agents" and rebels from the western region of Darfur.

The official death toll from the unrest stands at 26, including two security personnel.

Sudan has looked to maintain good relations with parties on both sides of a bitter Gulf region dispute. A Saudi Arabia-led bloc launched a boycott of Qatar in 2017, accusing it of supporting terrorism, a charge Doha denies.

Bashir has contributed troops to a Saudi-led coalition's war efforts in Yemen, but also struck deals and kept close ties with the Saudi bloc's rivals Qatar and Turkey.

Analysts and diplomats saw Bashir's trip as a chance to tap Qatar for assistance in shoring up the country's meagre finances, which have been drained since the south seceded with the lion's share of oil output in 2011.

Qatar has long played a mediating role in Sudan's Darfur conflict and was among the first countries to express support after protests broke out on Dec. 19, with Sheikh Tamim calling Bashir to offer "all that was necessary", according to Sudan.

"For Omar al-Bashir to make his first visit since the protests to Qatar and not to other traditional allies is big," said Ibrahim Fraihat, a professor of international conflict resolution at the Doha Institute for Graduate Studies.

"He obviously needs help and they (other allies) haven't been able to provide it," said Fraihat.

However, Sudan said on Wednesday it had received unspecified assistance from the United Arab Emirates, plus offers from Russia and Turkey of fuel and wheat. The scale and timing of that aid was unclear.