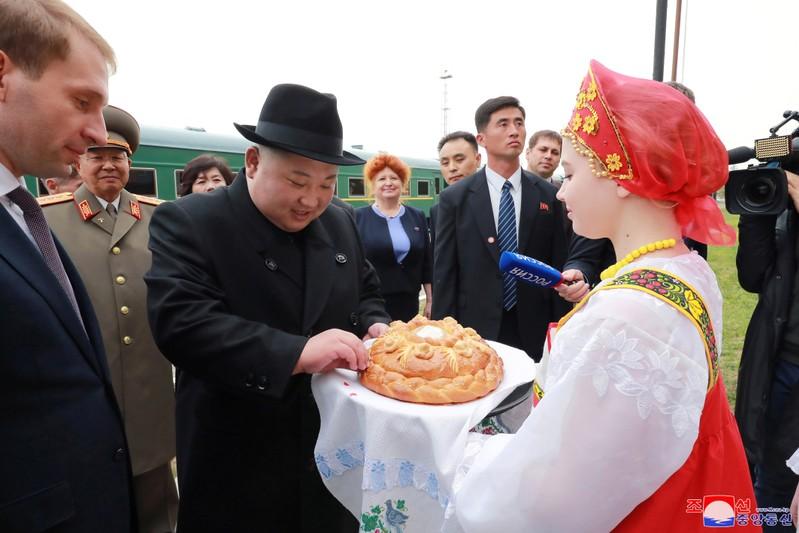 By Vladimir Soldatkin and Maria Vasilyeva

Putin and Kim held a day of talks on an island off the Russian Pacific city of Vladivostok two months after Kim's summit with U.S. President Donald Trump ended in disagreement, cooling hopes of a breakthrough in the decades-old nuclear row.

The talks between Putin and Kim did not appear to have yielded any major breakthrough.

But Putin, keen to use the summit to burnish Russia's diplomatic credentials as a global player, said he believed any U.S. guarantees might need to be supported by the other nations involved in previous six-way talks on the nuclear issue.

That would mean including Russia, China, Japan and South Korea as well as the United States and North Korea, a long-standing format that has been sidelined by unilateral U.S. efforts to broker a deal.

"They (the North Koreans) only need guarantees about their security. That's it. All of us together need to think about this," Putin told reporters after talks with Kim.

"... I'm deeply convinced that if we get to a situation when some kind of security guarantees are needed from one party, in this case for North Korea, that it won't be possible to get by without international guarantees. It's unlikely that any agreements between two countries will be enough."

Such guarantees would have to be international, legally binding, and vouch for North Korea's sovereignty, said Putin.

The two leaders appeared to get on well. The first session between Putin and Kim, comprising one-on-one talks with just a few aides present, lasted twice as long as the 50 minutes allocated in the schedule.

Putin described Kim as "quite open" and as "thoughtful" and "interesting".

Promising to brief the Chinese and U.S. leadership about his talks, Putin said he thought a deal on Pyongyang's nuclear programme was possible and that the way to get there was to move forward step-by-step in order to build trust.

There was no immediate comment on the summit from the U.S. State Department, but William Hagerty, the U.S. ambassador to Japan, told a Washington think tank Kim’s outreach to Russia and China was part of an effort to seek relief from international sanctions, which both are committed to.

"What we see is an outreach to try to find a way to deal with it. There is a much simpler way to deal with it and that is to denuclearize," he said, adding: "I think it’s critically important that we all remain in lockstep in enforcing the U.N. Security Council resolutions that sanction North Korea."

Kim, who arrived in Vladivostok on Wednesday on board his armoured train, said the situation on the Korean peninsula "is an issue that the world is very interested in".

He did not speak to the media afterwards, but shook hands with Putin before being driven away in his limousine.

The two leaders had earlier attended a gala dinner where they toasted each other and watched traditional musical numbers and dancing performed by Russian artists.

The two men also exchanged gifts. Kim gave Putin a traditional Korean sword, while the Russian leader gave Kim a sabre and a tea service suitable for use on his armoured train.

"When modern weapons did not exist, they used such swords," Russian state media cited Kim as telling Putin. "They embody strength, my soul and our people who support you."

With North Korea-U.S. talks stalled, the summit in Vladivostok has provided Pyongyang with an opportunity to improve ties with its giant neighbour Russia.

For the Kremlin, the summit was a chance to show it remains an important actor on the global stage despite efforts by the United States and other Western states to isolate it.

But with Moscow committed to upholding international sanctions until North Korea dismantles its nuclear programme, Russia's room for manoeuvre, beyond putting on a show of camaraderie, was limited.

Putin's last summit with a North Korean leader was in 2002 when his counterpart was Kim Jong Il, Kim Jong Un's father and predecessor. Kim Jong Il also met in 2011 with Dmitry Medvedev, then Russia's president and now its prime minister.