By Andrew Osborn and Anton Zverev MOSCOW/KERCH, Crimea (Reuters) - President Vladimir Putin on Wednesday shrugged off a threat from U.S. President Donald Trump to cancel a meeting with him due to Moscow's seizure of three Ukrainian navy ships, and accused Ukraine's president of orchestrating the crisis. Russia seized the Ukrainian vessels and their crews on Sunday near Crimea, the Ukrainian region which Moscow annexed in 2014, over what it said was their illegal entry into Russian waters, which Ukraine denies. 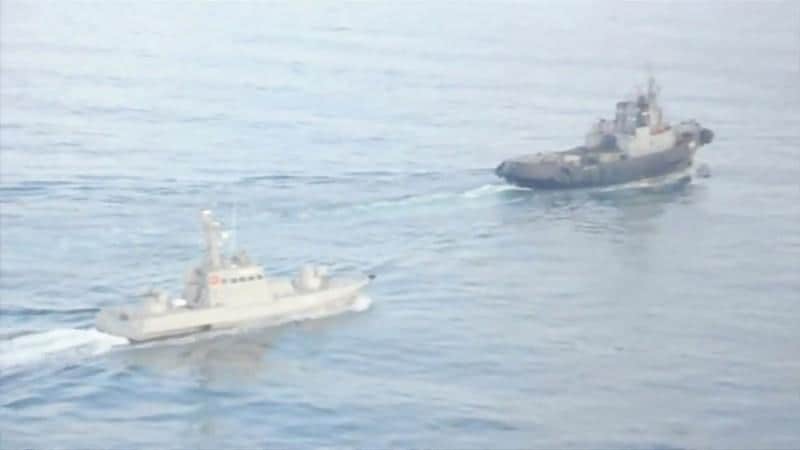 By Andrew Osborn and Anton Zverev

MOSCOW/KERCH, Crimea (Reuters) - President Vladimir Putin on Wednesday shrugged off a threat from U.S. President Donald Trump to cancel a meeting with him due to Moscow's seizure of three Ukrainian navy ships, and accused Ukraine's president of orchestrating the crisis.

Russia seized the Ukrainian vessels and their crews on Sunday near Crimea, the Ukrainian region which Moscow annexed in 2014, over what it said was their illegal entry into Russian waters, which Ukraine denies.

The episode has raised fears in the West of a wider conflict between the two countries, and Trump said on Tuesday that he might cancel a planned meeting with Putin at the G20 summit in Argentina later this week as a response to "aggression".

Some of Ukraine's Western allies have also raised the possibility of imposing new sanctions on Russia over the episode, which could deliver a blow to the Russian economy.

But Putin, in his first public comments on the Black Sea incident, said that the Ukrainian vessels had clearly been in the wrong, dismissed the clash as a minor border issue, and accused Ukrainian President Petro Poroshenko of having orchestrated the crisis in order to boost his dire ratings.

Putin said he also still hoped to meet Trump at the G20, while the Kremlin said the meeting was still being prepared and Washington had not informed Moscow it was off.

"It was without doubt a provocation," Putin told a financial forum in Moscow of the incident. "It was organised by the president ahead of the elections. The president is in fifth place ratings-wise and therefore had to do something. It was used as a pretext to introduce martial law."

Russian Foreign Minister Sergei Lavrov said he was saddened by what he asserted was Washington's willingness to encourage Ukraine's "provocation".

Putin said the West was willing to forgive Ukrainian politicians because it bought into their anti-Russian narrative.

Trump has been briefed on the situation as he considers whether to cancel the Putin meeting but no decision has been made, White House officials said on Wednesday.

"It was obviously a flagrant violation of international law. It was, I think, a cavalier use of a force that injured Ukrainian sailors," he told reporters at the Pentagon.

Kiev has introduced martial law in parts of the country, saying it fears a possible Russian invasion.

Speaking in northern Ukraine, Poroshenko, who has accused Moscow of naked military aggression, talked up his country's readiness to respond to any future Russian military action.

"It's important to keep our powder dry and be ready at any moment to push back the aggressor," said Poroshenko, adding that he had received offers from hundreds of Ukrainian war veterans who said they were ready to return and defend the country.

The United States and the EU have both imposed sanctions on Russia over its conduct towards Ukraine since 2014, when Moscow seized and annexed Ukraine's Crimea peninsula after a pro-Russian leader was toppled in Kiev.

Moscow later backed pro-Russian separatists in eastern Ukraine in a conflict in which more than 10,000 people have been killed. Major fighting ended with a 2015 ceasefire but deadly exchanges of fire are still frequent.

A Kremlin aide said on Wednesday that Putin had rebuffed an initiative from Poroshenko for the two men to speak by phone.

Vadim Astafyev, a spokesman for Russia's southern military district, was cited by Russian news agencies as saying that a new battalion of advanced S-400 surface-to-air missiles would be delivered to Crimea soon and become operational by year's end.

The deployment is likely to have been long-planned, but the timing of the announcement appeared designed to send a message to Ukraine and the West that Russia is serious about defending what it regards as its own territory and waters.

Crimea already hosts three battalions of the anti-aircraft missile systems which have a range of up to 400 km (250 miles) allowing Russia to control large swaths of the skies above the Black Sea. The new missile deployment to Crimea would allow Russia to increase its air defence coverage area.

Separately, a Reuters correspondent in Crimea on Wednesday observed a Russian navy minesweeper ship, the Vice-Admiral Zakharin, heading in the direction of the Sea of Azov.

The sea is home to major ports of both Russia and Ukraine, and can be reached only through the Russian-controlled Kerch Strait near where Sunday's incident took place.

A court in Crimea's capital Simferopol on Wednesday ordered nine of the 24 captured Ukrainian sailors - including senior Ukrainian naval officers and at least one member of Ukraine's SBU intelligence agency - held for a period of two months. The same court ordered the other 15 sailors on Tuesday to be detained for two months pending a possible trial.

All of the sailors face jail terms of up to six years if found guilty of what Moscow says was a plot to illegally cross the Russian border by trying to pass through the strait without advance notice and ignoring calls to stop.

Ukraine said its ships did nothing wrong and have every right to use the strait without Russian permission.