By Nick Pfosi MINNEAPOLIS (Reuters) - A special prosecutor said in court on Friday that four former Minneapolis police officers 'acted together' in causing the death of George Floyd in May, while defense lawyers strongly opposed the prosecution's bid for a joint trial. The hearing before Hennepin County District Court Judge Peter Cahill focused on various motions in the criminal case arising from a killing that triggered protests in the United States and other countries against racism and police brutality. 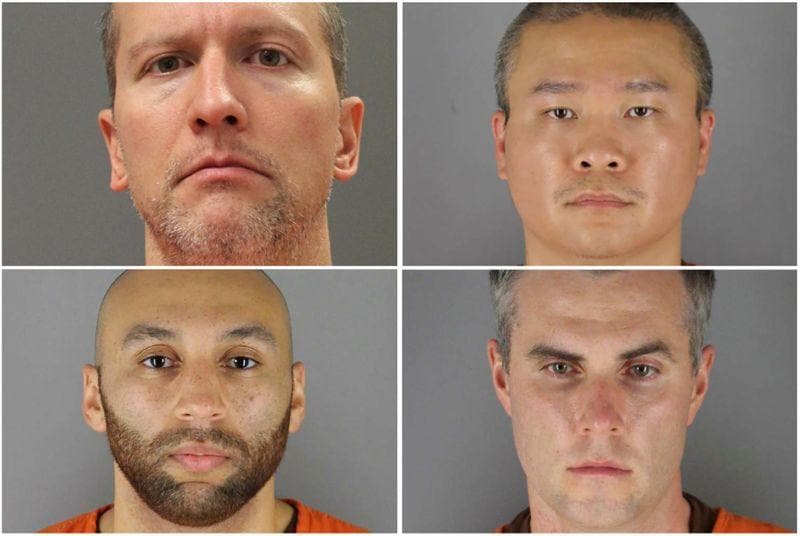 MINNEAPOLIS (Reuters) - A special prosecutor said in court on Friday that four former Minneapolis police officers "acted together" in causing the death of George Floyd in May, while defense lawyers strongly opposed the prosecution's bid for a joint trial.

The hearing before Hennepin County District Court Judge Peter Cahill focused on various motions in the criminal case arising from a killing that triggered protests in the United States and other countries against racism and police brutality.

It marked the first time that all four former officers - Derek Chauvin, J. Alexander Kueng, Thomas Lane and Tou Thao - appeared in court together since the death of Floyd, who was Black, after Chauvin, who is white, knelt on his neck for about nine minutes on May 25.

Chauvin, who faces the most serious charge of second-degree murder, was wearing a gray suit, dark shirt and tie, and blue surgical mask amid the coronavirus pandemic. He appeared thinner than on the bystander videos that showed the incident.

Neal Katyal, a special attorney for the state, told the judge that a joint trial was justified given that the evidence was similar for all four defendants and because separate trials would force witnesses and relatives to repeatedly relive the trauma of Floyd's death.

"I have seen a lot in my life, and I can barely watch the videos," Katyal, a lawyer and the U.S. Justice Department's former acting solicitor general brought in to help the prosecution, said about the bystander videos of Chauvin pinning Floyd to the pavement.

All four former officers have opposed a motion by prosecutors to consolidate their cases into one trial.

Robert Paule, an attorney for Thao, said combining the cases would force him both to defend against the prosecution and to navigate the potentially conflicting interests of the other defendants.

"I am not just dealing with prosecutors. I am dealing with three other attorneys who are defending their clients," Paule told the hearing. "You are bringing in a group of bobcats in a bag and letting them loose in a courtroom at all once."

The protests prompted by Floyd's death have been reignited in recent weeks by other incidents involving Black men and police in Kenosha, Wisconsin, and Rochester, New York.

About 100 protesters gathered outside the Family Justice Center in Minneapolis, chanting "Black lives matter," "no justice, no peace" and "indict, convict, send those killer cops to jail" as the hearing was conducted inside.

Addressing the request by all four defendants to move their trials outside of Minneapolis due to concerns about pretrial publicity, the judge said he would like to send a questionnaire to potential jurors to find out whether they had seen pretrial media coverage and how they were affected by it.

"Isn't the first step to ask the Hennepin jurors to see if we have a pretrial publicity problem?" Cahill asked.

All four defendants have filed motions to dismiss the charges. Cahill said he would not hear arguments on those motions on Friday.

(Reporting by Nick Pfosi in Minneapolis and Nathan Layne in Wilton, Connecticut; Editing by Steve Orlofsky and Will Dunham)