By Padraic Halpin and Graham Fahy DUBLIN (Reuters) - Prime Minister Leo Varadkar said he was quietly confident that a strong early turnout in Ireland's abortion referendum on Friday would favour those seeking change in what two decades ago was one of Europe's most socially conservative countries. Opinion polls suggest voters in the once deeply Catholic nation are set to overturn one of the world's strictest bans on terminations and analysts say a high turnout, particularly in urban areas, is likely to favour a 'Yes' vote 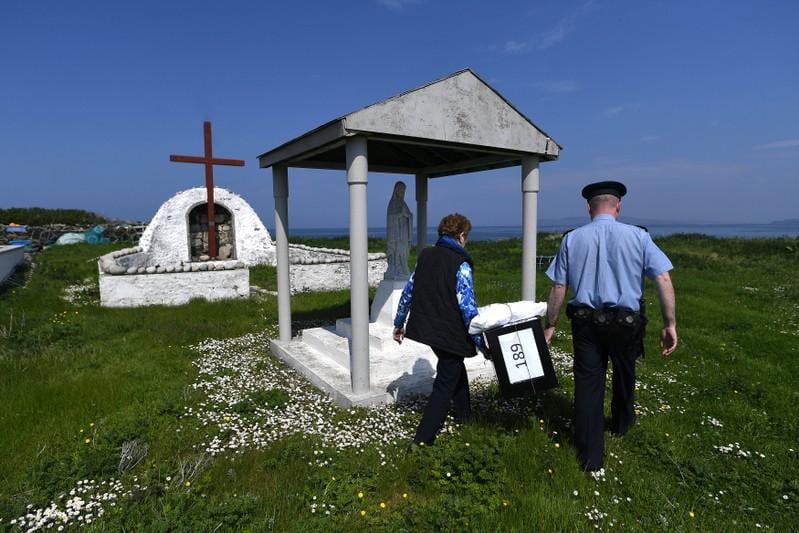 DUBLIN (Reuters) - Prime Minister Leo Varadkar said he was quietly confident that a strong early turnout in Ireland's abortion referendum on Friday would favour those seeking change in what two decades ago was one of Europe's most socially conservative countries.

Opinion polls suggest voters in the once deeply Catholic nation are set to overturn one of the world's strictest bans on terminations and analysts say a high turnout, particularly in urban areas, is likely to favour a "Yes" vote.

Turnout could top the 61 percent who backed gay marriage by a landslide in a 2015 if trends reported by 1700 GMT continue, national broadcaster RTE reported.

Participation was high in Dublin but also in large towns and rural areas across the country, and queues formed outside some polling stations when they opened at 0600 GMT.

"Not taking anything for granted but quietly confident. A high turnout, I think, would be to the advantage of the 'Yes' campaign," Varadkar, who is in favour of change and has called the referendum a "once-in-a-generation" chance, told reporters.

A high turnout would suggest both voter bases are fired up, meaning those who were coming off the fence would be decisive, said John McGuirk, spokesman for the anti-abortion Save the 8th umbrella group.

Voters are being asked if they wish to scrap a 1983 amendment to the constitution that gives an unborn child and its mother equal rights to life. The consequent prohibition on abortion was partly lifted in 2013 for cases where the mother's life is in danger.

Ireland legalised divorce by a razor-thin majority only in 1995, but became the first country to adopt gay marriage by popular vote in a 2015 referendum.

But no social issue has divided its 4.8 million people as sharply as abortion, which was pushed up the political agenda by the death in 2012 of a 31-year-old Indian immigrant from a septic miscarriage after she was refused a termination.

"I think this issue is important because it's been 35 years since any person has had a choice to vote on this," said Sophie O'Gara, 28, who was voting 'Yes' near Dublin's bustling 'Silicon Docks', home to some of the world's biggest technology firms.

"So many women have travelled across to England to take care of their family and healthcare needs and I think it's a disgrace and it needs to change," she said, referring to women who travel to Britain for abortions.

The fiercely contested vote has divided political parties, seen the once-mighty church take a back seat, and become a test case for how global internet giants deal with social media advertising in political campaigns.

Unlike in 1983, when religion was front and centre and abortion was a taboo subject for most, the campaign was defined by women on both sides publicly describing their personal experiences of terminations.

"Yes" campaigners have argued that with over 3,000 women travelling to Britain each year for terminations -- a right enshrined in a 1992 referendum -- and others ordering pills illegally online, abortion is already a reality in Ireland.

Writing in the Times Ireland newspaper, Varadkar urged voters to put themselves in the shoes of an Irish woman dealing with a crisis pregnancy.

Although not on the ballot paper, the "No" camp has seized on government plans to allow abortions with no restriction up to 12 weeks into a pregnancy if the referendum is carried, calling it a human rights issue and a step too far for most voters.

"I think it's important that we protect the unborn babies, people don't care anymore about the dignity of human life. I've a family myself and I think it's really important," said John Devlin, a marketing worker in his 50s voting 'No' near Dublin's city centre.

Opinion polls have shown the "Yes" side, in favour of changing the law, taking a clear lead.

The Irish Times newspaper will publish an exit poll some time after polls close at 2100 GMT and RTE will publish theirs at 2230 GMT. Vote-counting begins at 0800 GMT on Saturday, with the first indication of results expected mid-morning.

Videos shared on social media showed scores of voters arriving home at Irish airports from abroad. Ireland does not allow expatriates to vote via post or in embassies but those away for less than 18 months remain on the electoral roll.

As with the gay marriage referendum, those using the #hometovote hashtag on Twitter appeared overwhelmingly to back change. Many posted photos of themselves wearing sweatshirts bearing the "Repeal" slogan.

"Women and girls should not be made into healthcare refugees when they are in a time of crisis," said Niamh Kelly, 27, who paid 800 euros and travelled 20 hours to return home from Hanoi where she works as an English teacher.

"This is a once in a lifetime generation chance to lift the culture of shame that surrounds this issue so it was really important to me to be part of that."