By Sarah Marsh HAVANA (Reuters) - Prince Charles and his wife, Camilla, met with Cuban President Miguel Diaz-Canel on Monday during the first official British royal visit to the Caribbean island, even as Britain's top ally, the United States, seeks to isolate Cuba's Communist government. The meeting in the presidential Palace of the Revolution crowned the couple's first full day in Havana, during which they walked around the city's colonial centre, unveiled a statue of British playwright Shakespeare and visited the dance studio of former Royal Ballet star Carlos Acosta. The three-day trip aims to strengthen British-Cuban ties as part of a broader normalization of the island's relations with the West, even though the Trump administration has sought to unravel a detente between Cuba and the United States 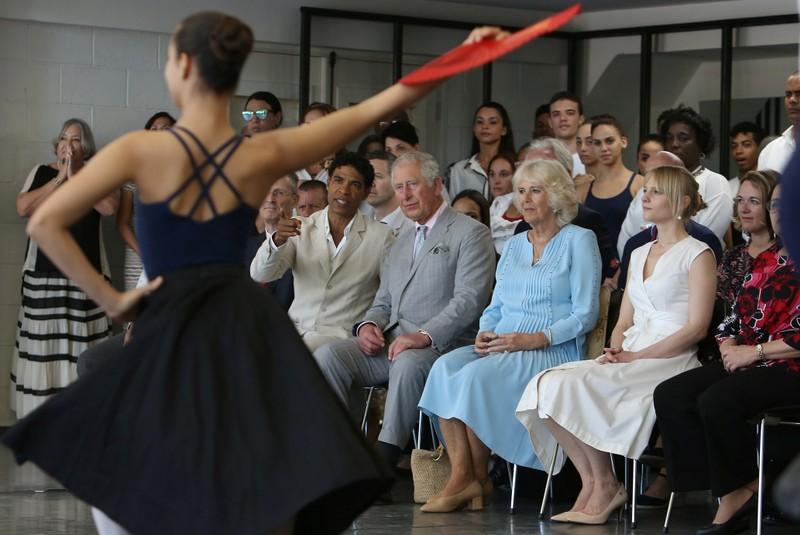 The meeting in the presidential Palace of the Revolution crowned the couple's first full day in Havana, during which they walked around the city's colonial centre, unveiled a statue of British playwright Shakespeare and visited the dance studio of former Royal Ballet star Carlos Acosta.

The three-day trip aims to strengthen British-Cuban ties as part of a broader normalization of the island's relations with the West, even though the Trump administration has sought to unravel a detente between Cuba and the United States.

Washington is also increasingly blaming Cuba for the crisis in its leftist ally Venezuela.

British Foreign Secretary Jeremy Hunt told his Cuban counterpart in a phone call on Monday he hoped the royal visit would boost cooperation, while calling on Cuba to play "a more constructive role in resolving the Venezuelan crisis."

"We are honoured to receive them and show them with pride the nation we are," Diaz-Canel, who replaced Raul Castro as president last April, wrote in a tweet on Monday. "The visit expresses the good state of our relations."

The heir to the British throne and his wife were guided in the morning on a city tour by Eusebio Leal, the historian who has overseen a facelift of the Cuban capital's historic centre.

With Charles sporting sunglasses and Camilla holding a dainty cream parasol under a fierce Caribbean sun, the royal couple stopped to banter with tourists and Cubans on their walk.

"He told me the best thing about my place was the air conditioning," said Josefina Hernandez, 58, with a chuckle. She runs a private barbershop in Old Havana where Charles stopped to visit, sitting in one of the antique swivel seats with red leather upholstery. "I would never have thought a prince were so down-to-earth, and that he would choose such a humble place to sit and talk."

The Prince of Wales visited with the owners of several such private businesses that have flourished over the last decade since Cuba started opening more of its beleaguered state-dominated economy to free enterprise.

Charles also visited a workshop that trains hundreds of young people in restoration techniques, necessary for the upkeep of Havana, which was founded in 1519. Much of the city has crumbled due to neglect and a lack of funds for restoration.

The royal couple stopped at several points to listen to bands playing traditional Cuban music including Guantanamera, but they did not visit a memorial garden for Princess Diana, Charles' late first wife, that had been renovated for the occasion of their visit.

"I'm disappointed he didn't come," said Margarita Rego, 73, who guards the tiny memorial. "I suppose they must have changed the itinerary at the last moment."

The royals added Cuba to their nearly two-week Caribbean tour of former and current British territories at the request of the British government.