By Luke Baker, Andreas Rinke and Philip Blenkinsop LONDON/BERLIN/BRUSSELS (Reuters) - If Donald Trump loses in November, it's no secret that most European policymakers will be happy to see his back. But as they envision the possibility of a post-Trump future, many are wondering how quickly the trans-Atlantic alliance can be fixed 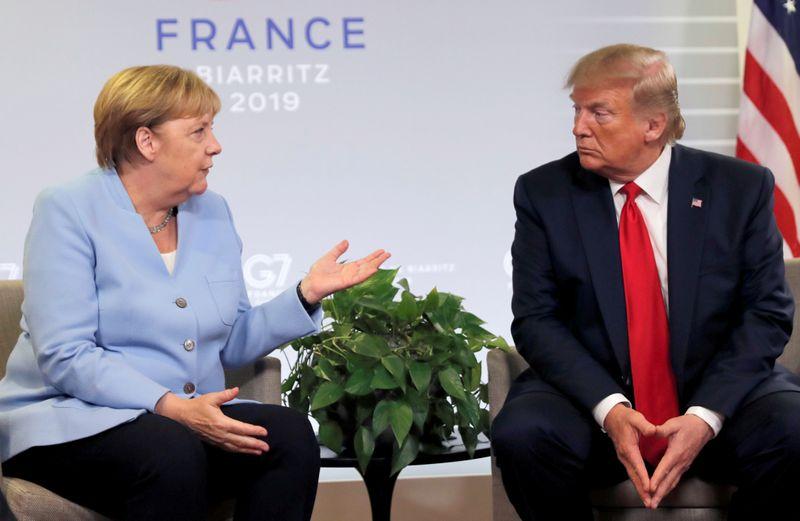 LONDON/BERLIN/BRUSSELS (Reuters) - If Donald Trump loses in November, it's no secret that most European policymakers will be happy to see his back. But as they envision the possibility of a post-Trump future, many are wondering how quickly the trans-Atlantic alliance can be fixed.

Despite U.S. opinion polls showing Biden ahead, officials in capitals across Europe say they are making no assumptions about the likely outcome of the U.S. election.

Having failed to anticipate Trump's first victory, "the German government already burned its fingers," said Jürgen Hardt, foreign affairs spokesman for Chancellor Angela Merkel's CDU party and an expert on U.S.-German ties. "I do not have the impression that the German government is waiting for another president – and I would advise them not to do it."

Still, when they allow themselves to look ahead to the prospect of a Biden presidency, they don't necessarily see an instant resumption of the easier Barack Obama years. Though tone and style would shift overnight, policy substance on issues from China to Russia to trade could take longer to overhaul.

"I don't expect that, if we have a new president, everything will just fall into place," said Reinhard Buetikofer, a trade expert for the Greens in the European Parliament.

At best, if Biden wins, Buetikofer sees a chance for "revisiting and reforming multilateralism" after years of open U.S. hostility to institutions from NATO and the EU to the World Health Organization and the World Trade Organization.

There are areas where frictions created by Trump could disappear as soon as Trump does: on climate policy, for example, a President Biden is likely to jump straight back into the Paris climate change accord that Trump quit.

The WTO trade dispute mechanism that has collapsed because of a U.S. veto of the appointment of judges could be put back together quickly.

European countries that have prized Western unity in rebuffing Russian advances in Ukraine will no longer have to worry that the president of the United States will invite Vladimir Putin to a G7 summit without consulting them, as Trump did last month.

"We would review all of the decisions that President Trump has taken," Anthony Blinken, Biden's senior adviser on foreign policy, told Reuters, referring specifically to Trump's threat in recent weeks to withdraw U.S. troops from Germany.

But there are also issues where a Biden presidency may not be able to simply pick up where Obama left off.

On Iran, for example, Europe has spent the past three years trying to salvage an Obama-era agreement to lift sanctions in return for curbs on Tehran's nuclear programme. But so much has happened since Trump abandoned the pact in 2018, and so much has unravelled, it may be too late to save it.

And there are other issues where Europe and the United States have real differences that are not going to be simple to resolve, even with a friendlier figure in the White House.

Biden is not expected to be any happier than Trump was about European countries' plans to incorporate technology from China's Huawei, the world's biggest telecoms equipment maker, in their next generation mobile phone networks.

On trade, while Biden is not likely to be as trigger happy as Trump has been to impose tariffs on allies, there are serious disputes. Germany, for example, wants to help the exports of its big car manufacturers.

With the elections months away, European countries are still working on their own issues with the U.S. administration.

In the Netherlands, that means discussing whether Dutch chipmaker ASML should have a licence to export technology to China. In France, the focus is on plans to tax big, mostly American tech companies, after Washington scuppered global talks.

European countries with nationalist leaders that have enjoyed warmer ties with Trump may use the next few months to consolidate diplomatic gains. Poland aims to solidify plans for a "Fort Trump" - a long sought-after base of U.S. troops.

But any big changes in the trans-Atlantic relationship will have to wait at least until November, said the Paris-based ambassador of a large EU country, predicting a "moment of confrontation" if Trump should win another term.

"Everybody is keeping their fingers crossed and will wait."