By Philip Pullella VATICAN CITY (Reuters) - Pope Francis on Sunday appeared to add his own thumbs-down to widespread criticism of an unorthodox nativity scene in St. 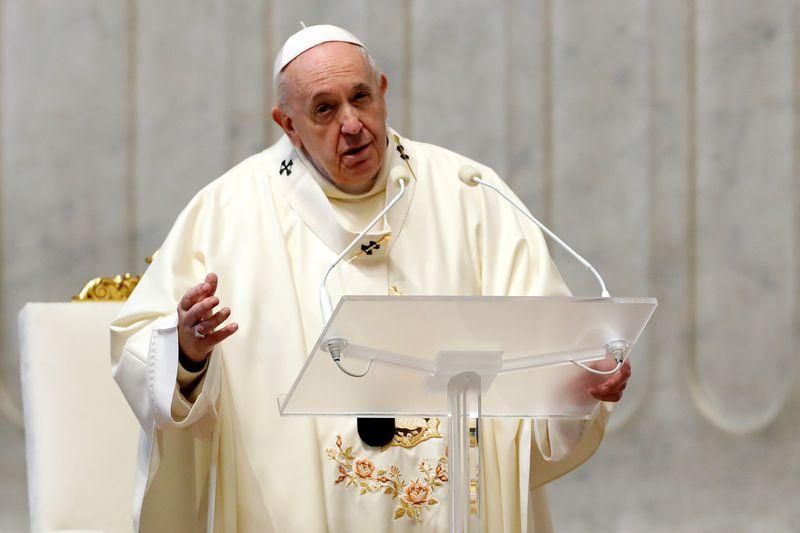 VATICAN CITY (Reuters) - Pope Francis on Sunday appeared to add his own thumbs-down to widespread criticism of an unorthodox nativity scene in St. Peter's Square, telling visitors to instead visit a nearby exhibition of traditional crèches.

At his last Sunday blessing and address before Christmas, Francis also said the holy day that marks the birth of Jesus had been "kidnapped" by consumerism.

Speaking from his window overlooking the square, Francis twice urged people to visit an outdoor exhibit under the square's colonnade where 100 small traditional nativity scenes are on display.

They demonstrated "how people try to use art to show how Jesus was born (and)... are a great religious education of our faith," he said.

He made no mention of the main nativity in the centre of the square, a larger-than-life ceramic assembly of statues that includes an astronaut and a character reminiscent of Darth Vader from Star Wars.

It has received scathing reviews in the media and from visitors, many of whom have expressed emotions ranging from puzzlement to contempt.

The Vatican displays a different donated nativity scene each year, chosen by its municipal government.

This year's was made between 1965 and 1975 by students and teachers in Castelli, an Italian town famous for ceramics. The astronaut represents the lunar landings of the late 1960s and early 1970s, according to a description for visitors.

In his address, Francis also warned against "frenetic" consumerism during the Christmas season, urging people to remember those who have nothing.

"Consumerism has kidnapped Christmas, (taking it) away from us," he said. "There is no consumerism in the manger in Bethlehem. What is there is reality, poverty and love."