Vatican City: Pope Francis on Wednesday slammed the deadly attack on a Jerusalem synagogue and urged Israelis and Palestinians to take the courageous decisions needed to achieve reconciliation.

Against a backdrop of fears the conflict could be entering a new phase of sectarian violence and Israel's warning of a tough response to the killings, the Argentinian pontiff appealed for restraint and dialogue. 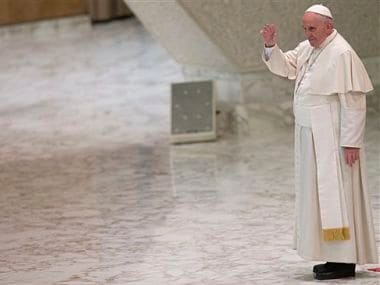 "I have followed with concern the alarming increase in tension in Jerusalem and other zones of the Holy Land and the unacceptable incidents from which even places of worship have not been spared," he said at his weekly general audience.

"From the bottom of my heart I appeal to the parties involved to put an end to the cycle of hate and violence and to take courageous decisions for reconciliation and peace. Building peace is difficult but without peace life is torment."

Five Israelis died as a result of Tuesday's attack by two Palestinians armed with a gun and meat cleavers. The attackers were both killed in a gun battle with police.

Israeli Prime Minister Benjamin Netanyahu has promised a harsh response and it appeared on Wednesday that a crackdown was under way in east Jerusalem with Israeli forces demolishing the home of a resident blamed for a previous attack.