By Philip Pullella VATICAN CITY (Reuters) - Pope Francis has defrocked a 88-year-old Chilean priest who sexually abused teenage boys over a period of many years and is at the centre of a wider abuse scandal that is still under investigation, the Vatican said on Friday. 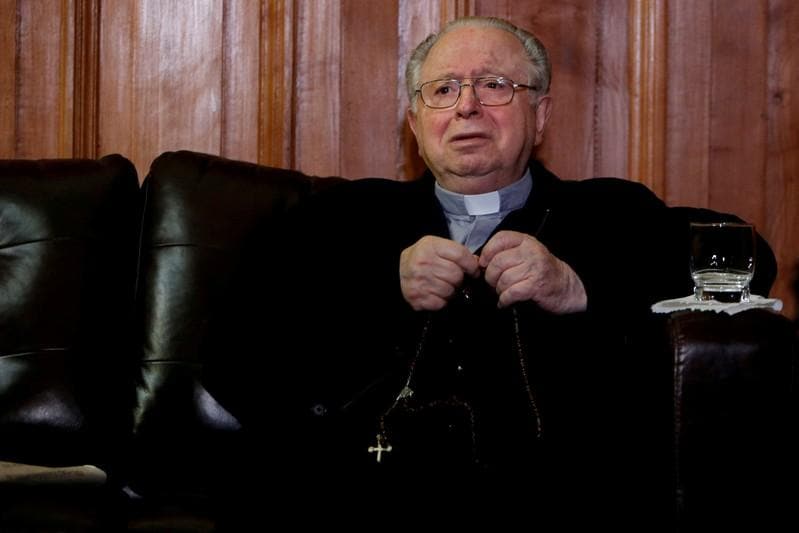 VATICAN CITY (Reuters) - Pope Francis has defrocked a 88-year-old Chilean priest who sexually abused teenage boys over a period of many years and is at the centre of a wider abuse scandal that is still under investigation, the Vatican said on Friday.

Father Fernando Karadima was defrocked, or "reduced to the lay state" by the pope on Thursday, a move the Vatican called "exceptional" and done "for the good of the Church".

Karadima, who lives in a home for the elderly in the Chilean capital Santiago, was notified on Friday.

He was found guilty in a Vatican investigation in 2011 and ordered to live a life of "prayer and penitence", but was not defrocked at the time, the final years of the reign of former Pope Benedict. That meant he was still a priest, although he could not minister in public.

"This justice has been long delayed. It is actually more a reminder of how slow the pope has been to enact meaningful reform," Anne Barrett-Doyle, co-director of BishopAccountability.org, a U.S.-based resource centre that tracks cases of clerical abuse worldwide, told Reuters.

She called for the same action to be taken against bishops who allegedly protected Karadima.

Karadima, who has always denied wrongdoing, escaped civilian justice because of the statute of limitations in the country.

Seven Chilean bishops have resigned since June after an investigation into an alleged cover-up of Karadima's crimes, some of them former proteges of Karadima, who prepared them for the priesthood as young men in Santiago's up-scale, conservative El Bosque neighbourhood.

Three Chilean men who said they were abused by Karadima accused one, Juan Barros, the former bishop of Osorno, of having witnessed Karadima abuse them. Barros has denied this.

During a trip to Chile in January, the pope said he had no proof against Barros, believed he was innocent, and that accusations against him were "slander" until proven otherwise.

But days after returning to Rome, the pope, citing new information, sent sexual abuse investigator Archbishop Charles Scicluna of Malta to Chile to speak to victims, witnesses and other Church members.

Scicluna produced a 2,300-page report accusing Chile's bishops of "grave negligence" in investigating the allegations and said evidence of sex crimes had been destroyed.

In April, Francis, who is also grappling with sexual abuse crises in the United States, Germany and Australia, held four days of meetings in Rome with the three victims - Juan Carlos Cruz, James Hamilton and Jose Andres Murillo.

"I have a knot in my stomach. I never thought I would see this day," Cruz said in a tweet thanking the pope. "He (Karadima) is criminal who has ruined so many people’s lives with his abuse. I hope thousands of survivors feel a bit of the relief I feel today."

Following the meeting with the victims, Francis summoned all of Chile's 34 bishops to Rome in May and they offered their resignations en masse. Francis has so far accepted seven, and appointed "apostolic administrators" to run their dioceses.