Pompeo warns of 'new turmoil' if U.N. arms embargo on Iran lifted in 2020

By Michelle Nichols UNITED NATIONS (Reuters) - U.S. Secretary of State Mike Pompeo pushed the international community on Tuesday to work out how to stop Iran from being 'unshackled to create new turmoil' when a United Nations arms embargo on the country and a travel ban on the head of Iran's elite Quds Force expire in October 2020. Speaking at a U.N 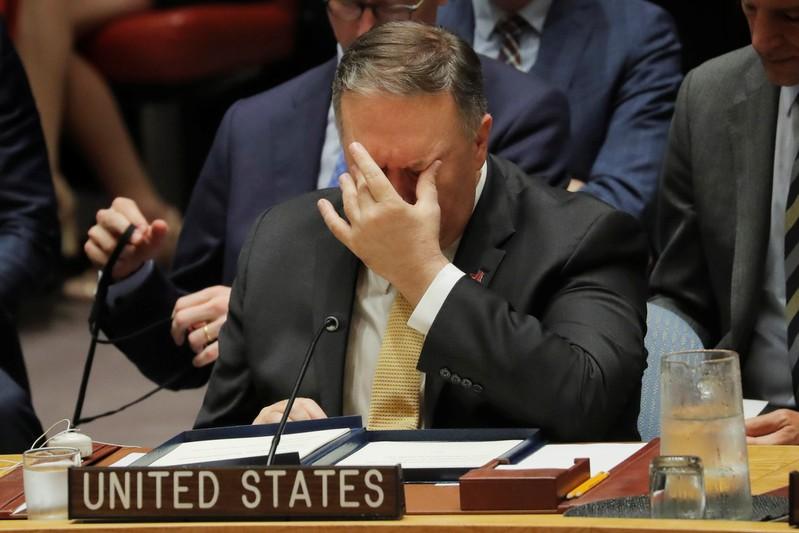 UNITED NATIONS (Reuters) - U.S. Secretary of State Mike Pompeo pushed the international community on Tuesday to work out how to stop Iran from being "unshackled to create new turmoil" when a United Nations arms embargo on the country and a travel ban on the head of Iran's elite Quds Force expire in October 2020.

Speaking at a U.N. Security Council meeting on Middle East peace and security challenges, Pompeo called for greater cooperation in the region to produce "fresh thinking to solve old problems," citing problems including the Libyan and Syrian conflicts and a rift between several Gulf states and Qatar.

He also singled out Iran. Tensions between Tehran and Washington have risen since President Donald Trump's administration last year quit an international deal to curb Iran's nuclear ambitions and began to ratchet up sanctions.

"Since the U.S. declared our intention to bring all Iranian oil purchases to zero in April, the Ayatollah has gone all-in on a campaign of extortion diplomacy," he said, calling out Iran for breaching caps imposed by the 2015 nuclear deal, test-firing a ballistic missile and seizing tankers in the Strait of Hormuz.

Under the Iran nuclear deal, a U.N. arms embargo on the country and a travel ban on Quds Force commander Qasem Soleimani are due to expire next year. The Quds Force is the overseas arm of Iran's Revolutionary Guards (IRGC).

Pompeo said the U.S. State Department had put a clock on its website that was counting down to the removal of the measures.

"The international community will have plenty of time to see how long it has until Iran is unshackled to create new turmoil, and figure out what it must do to prevent this from happening," he said.

At a U.N. Security Council meeting in December, Pompeo urged the 15-member body to prevent Iran from working on ballistic missiles capable of delivering nuclear weapons, carrying out test launches and establish "inspection and interdiction measures, in ports and on the high seas, to thwart Iran's continuing efforts to circumvent arms restrictions."

The council has not, and is unlikely to take any action on Iran. European powers have been scrambling to salvage the nuclear deal, while diplomats say Russia and China - which are council veto powers along with the United States, France and Britain - are likely to shield Iran from any action.

The U.S. special envoy for Iran, Brian Hook, signalled earlier on Tuesday that the United States would not try to trigger a return of all international sanctions on Iran through a dispute resolution process agreed under the nuclear deal and enshrined in a 2015 U.N. Security Council resolution.

Although the United States quit the nuclear deal, some diplomats have questioned whether Washington might still spark a so-called snapback of sanctions on Tehran at the Security Council because the U.N. resolution still names it as a party to the deal.

"We're no longer in the deal and so the parties that are still in the deal will have to make their decisions with respect to using or not using the dispute resolution mechanism," Hook told reporters in New York. "There's no question that Iran is in breach of the Iran nuclear deal."