Pompeo says 'bad deal' with North Korea not an option, hopeful about summit 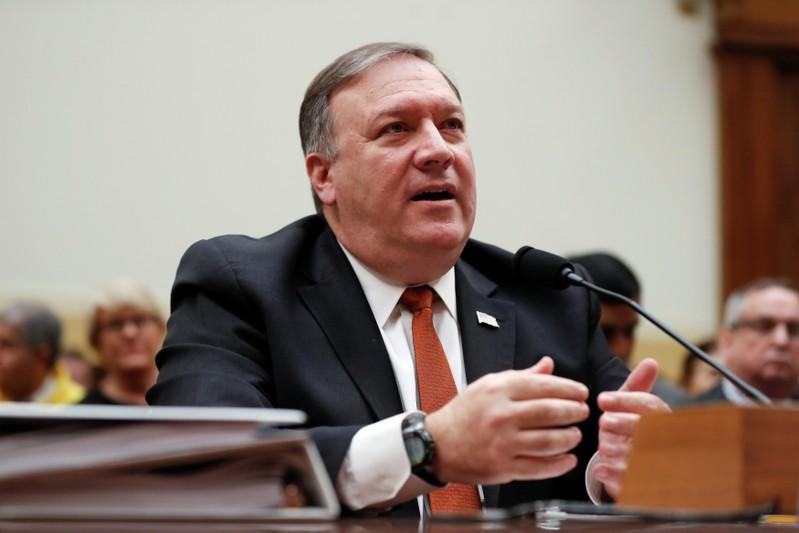 By Lesley Wroughton and Patricia Zengerle

WASHINGTON (Reuters) - U.S. Secretary of State Mike Pompeo said on Wednesday the United States is prepared to walk away from nuclear negotiations with North Korea if an upcoming meeting between U.S. President Donald Trump and North Korean leader Kim Jong Un heads in the wrong direction.

"A bad deal is not an option," Pompeo said in his written opening statement for a House Foreign Affairs Committee hearing. "The American people are counting on us to get this right. If the right deal is not on the table, we will respectfully walk away."

Pompeo expressed hope the summit will take place on June 12 in Singapore as scheduled after Trump said on Tuesday there was a "substantial chance" it will be called off amid concerns Pyongyang is not prepared to give up its nuclear arsenal.

Pompeo said a U.S.-led sanctions pressure campaign on Pyongyang would not be eased until North Korea gives up nuclear weapons and that the United States had no intention of making concessions to Pyongyang.

"Our posture will not change until we see credible steps taken toward the complete, verifiable and irreversible denuclearization of the Korean peninsula," Pompeo said.

Pompeo said Trump would be leading the talks but declined to discuss how many people, or who, would be on the summit team.

Pompeo, who was director of the CIA before becoming secretary of state in April when Trump fired Rex Tillerson, has met twice with Kim in Pyongyang. On his most recent trip he brought back three Americans who had been held by North Korea.

Pompeo also addressed tensions with Iran over its nuclear program, saying Washington was seeking to meet with European and other allies on the way forward after Trump pulled the United States out of the 2015 Iran deal earlier this month.

He said he intends to meet with allies in June to discuss next steps to stop what he described as all of Tehran's nuclear and non-nuclear threats.

"We're not very far along ... A number of discussions have taken place below the foreign minister level," Pompeo said.

In a major speech on Monday, Pompeo demanded sweeping changes - including Iran dropping its nuclear program to pulling out of Syria's civil war - or face the "strongest sanctions in history" unless it changes its behavior. A senior Iranian official said it showed the United States was seeking regime change in Iran.

Members of the House committee repeatedly asked Pompeo about Americans held in Iran, including Robert Levinson, a former FBI agent and DEA agent, who disappeared in Iran in 2007.

Trump's withdrawal from the 2015 Iran nuclear deal prompted concerns among families of American prisoners held by the Islamic Republic that it will be more difficult to win their release.