By Jeffrey Heller JERUSALEM (Reuters) - Israeli Prime Minister Benjamin Netanyahu showcased his close relationship with the Trump administration on Wednesday, hosting U.S. Secretary of State Mike Pompeo three weeks before an Israeli election. Washington's announcement that President Donald Trump, a popular figure among Israelis, had invited Netanyahu to the White House for talks and a dinner two weeks ahead of the April 9 vote was also widely seen in Israel as a boost for the right-wing Likud party chief 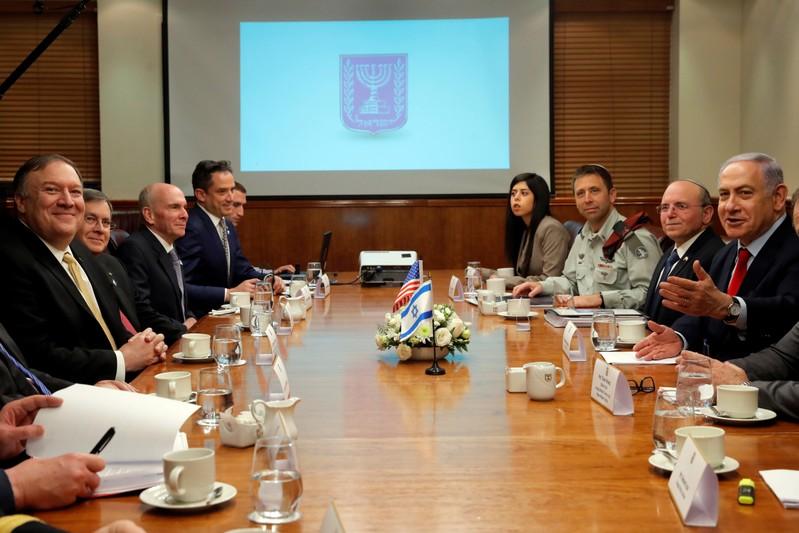 Washington's announcement that President Donald Trump, a popular figure among Israelis, had invited Netanyahu to the White House for talks and a dinner two weeks ahead of the April 9 vote was also widely seen in Israel as a boost for the right-wing Likud party chief.

Following a visit to Kuwait, Pompeo met Netanyahu in Jerusalem, where both men hailed U.S.-Israeli ties under Trump, a popular figure among Israelis and a leader whom the prime minister has featured on election billboards.

"We also know that our alliance in recent years has never been stronger," Netanyahu said in comments to reporters, with Pompeo at his side.

Netanyahu is battling for his political survival against both a strong challenger in centrist candidate Benny Gantz and against plans by Israel's attorney-general to indict the prime minister, now in his fourth term, in three corruption cases.

Netanyahu has denied any wrongdoing and portrayed himself in the election race as a leader with a wealth of international diplomatic experience that Gantz, a former armed forces chief and novice politician, cannot match.

Angering Palestinians and drawing international concern, Trump broke with decades of U.S. Middle East policy by recognising Jerusalem as Israel's capital in 2017 and moving the American Embassy, which Pompeo will visit on Thursday, to the city last May.

Pompeo, in his remarks, said the Israeli people should have confidence that Trump - who is due to present a peace plan after the Israeli ballot - will maintain a "close bond" with Israel.

"I know that you and the president have an outstanding working relationship," Pompeo said, addressing Netanyahu. "He sent me here to build upon that and to represent him here."

Netanyahu said he and Pompeo, at the start of their discussions, examined how to "roll back Iranian aggression" in the region.

Pressure on Iran, Netanyahu said, must be intensified now that the United States has reimposed sanctions on Tehran following Washington's withdrawal from a 2015 deal with world powers to limit the Iranian nuclear programme.

Pompeo and Netanyahu later attended a meeting in Jerusalem with leaders from Cyprus and Greece on the construction of a 2,000 km (1,243 mile) gas pipeline linking vast eastern Mediterranean gas resources to Europe through those countries and Italy at a cost of $7 billion.

Lebanon - Pompeo's next stop - has warned its Mediterranean neighbours that the planned EastMed pipeline must not be allowed to violate its maritime borders.