By Humeyra Pamuk WASHINGTON (Reuters) - A war of words between China and the United States showed no signs of let up on Monday, with U.S. Secretary of State Mike Pompeo in a phone call with a top Chinese diplomat expressing 'strong U.S 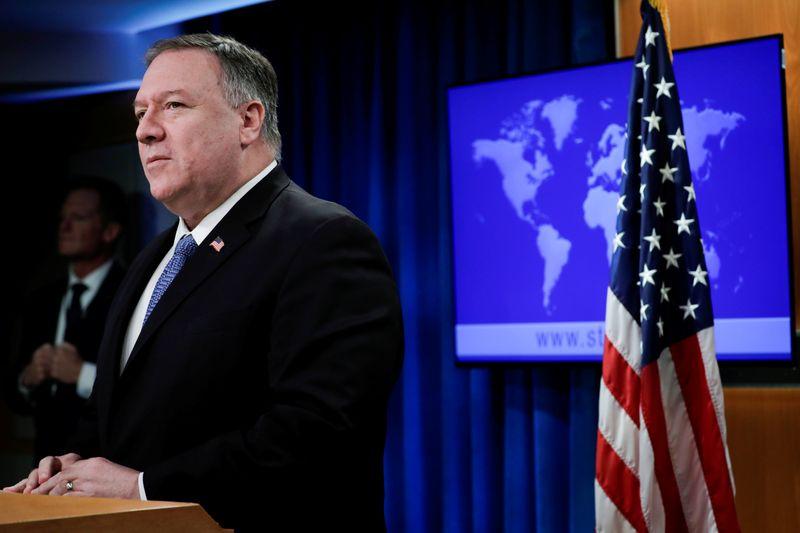 WASHINGTON (Reuters) - A war of words between China and the United States showed no signs of let up on Monday, with U.S. Secretary of State Mike Pompeo in a phone call with a top Chinese diplomat expressing "strong U.S. objections" over what Washington sees as Beijing's efforts to shift blame for the spread of the coronavirus.

Ties between the world's top two economies, already complicated due to issues including trade, intellectual property rights as well as press freedoms, have further been tested by the outbreak of coronavirus, which causes the sometimes fatal, highly contagious respiratory illness COVID-19.

"Secretary Pompeo conveyed strong U.S. objections to PRC efforts to shift blame for COVID-19 to the United States," Morgan Ortagus, State Department spokeswoman said in a statement about Pompeo's call with Yang Jiechi, director of the Office of Foreign Affairs of the Communist Party of China.

"The Secretary stressed that this is not the time to spread disinformation and outlandish rumors, but rather a time for all nations to come together to fight this common threat," Ortagus said.

The United States on Friday summoned the Chinese ambassador to protest against comments by Beijing suggesting the U.S. military might have brought the coronavirus to Wuhan. David Stilwell, the top U.S. diplomat for East Asia, delivered a very "stern representation" to China's ambassador Cui Tiankai.

Chinese state broadcaster CCTV reported on Monday that in the phone call Yang told Pompeo that attempts to smear China's efforts to control the coronavirus "will not succeed" and that actions that harmed China's interests would be retaliated against.

The coronavirus, which emerged in China late last year, has spread around the world, upended many countries' daily lives, pummeled financial markets, brought flights to a standstill, shut down schools and forced the postponement of almost all gatherings including sports and arts events.

Beijing was criticized for initially attempting to censor some Chinese doctors who sounded an alarm over the virus. Since January, it has imposed draconian containment measures, effectively locking down Wuhan and the surrounding Hubei province, home to 60 million people.

Pompeo, who has sharply criticised Beijing on a number of issues from its trade practices to religious freedoms, has complained that the U.S. response had been hindered by what he called imperfect data from Beijing.

However on Friday, U.S. President Donald Trump praised China for its "data sharing" and appeared to brush off any concern, saying he had read one article on the subject, but that he did not think it was representative of his discussions with Chinese President Xi Jinping.