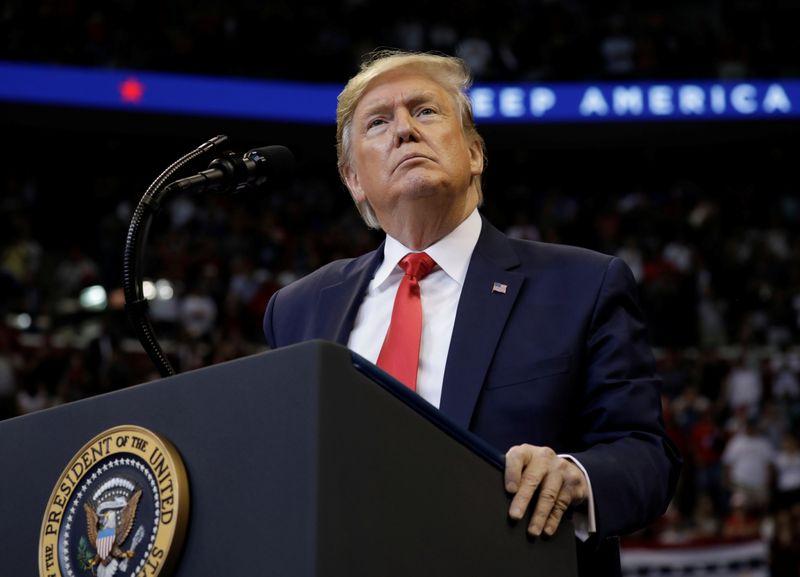 DETROIT (Reuters) - Public testimony in Congress has done little to sway Wisconsin voters' views on the possible impeachment of President Donald Trump, a new poll from the battleground state showed on Thursday.

The Marquette University Law School poll also showed former Vice President Joe Biden was the only Democratic candidate with an advantage in the state in a predictive match-up with Trump in the 2020 presidential election, though just barely.

Forty percent of the 800 registered voters in Wisconsin queried by the school in early December after most testimony had concluded said Trump should be impeached and removed from office, while 52% did not support that, and 6% said they did not know.

Those numbers were nearly the same as a poll conducted several weeks earlier by the school as the testimony was underway.

"People are dug in," Charles Franklin, the director of the poll, said in a webcast presentation on the results.

Biden edged Trump by 1 point, 47 to 46, in a general election match-up. But top Democratic contenders, including U.S. senators Bernie Sanders, Elizabeth Warren, and Cory Booker, as well as South Bend, Indiana mayor Pete Buttigieg, were within one or two points of Trump, the differences falling within the poll's margin of error.

Biden received the most support among those who said they would vote in the Democratic primary, with 23%, followed by Sanders at 19%, Warren at 16%, and Buttigieg at 15%. Nearly two-thirds said they could still change their mind about candidates.

Trump narrowly won Wisconsin by about 23,000 votes in 2016, and his campaign has made stops in the key battleground states of Wisconsin, Michigan and Pennsylvania a priority in early campaigning.

Public opinion has been split down party lines, with most Democrats wanting to see Trump impeached, and most Republicans opposed to it. His approval rating has largely remained consistent throughout the inquiry.

Trump has denied any wrongdoing as Democrats have made the case that he used the presidency to strongarm Ukraine into investigating his political opponent Biden.

U.S. lawmakers moved closer on Thursday to impeaching Trump, as members of a House of Representatives committee debated formal charges that are likely to be sent to the full House for a final vote next week.

While the House appears likely to approve impeachment, the Republican-controlled Senate is expected to dismiss the charges. Trump meanwhile has sought to fire up supporters by claiming Democrats are pursuing a witch hunt against him.