Police hunt for brothers from Northern Ireland over truck deaths

By Michael Holden LONDON (Reuters) - British police were hunting on Tuesday for two brothers from Northern Ireland whom they described as 'crucial' to an investigation into the deaths of 39 people found in the back of a truck near London last week. The discovery of the bodies in a refrigerated truck on an industrial estate near London has shone a spotlight on the illicit trade that sends the poor of Asia, Africa and the Middle East on perilous journeys to the West 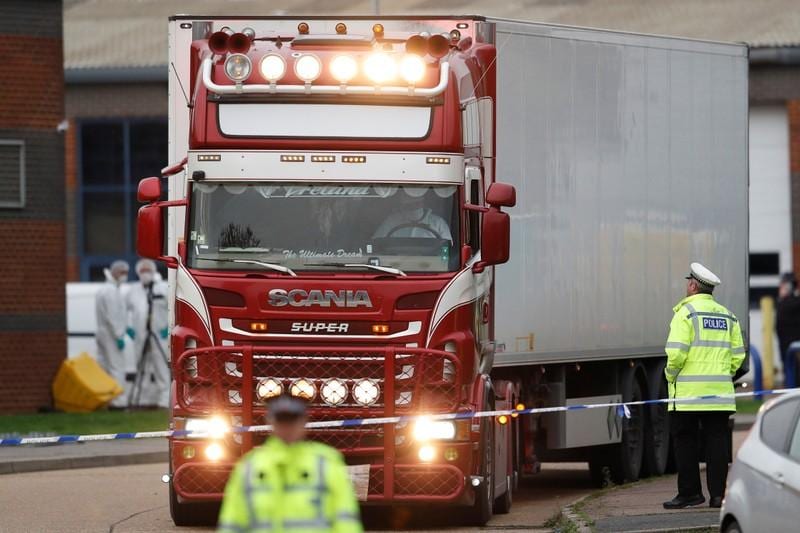 LONDON (Reuters) - British police were hunting on Tuesday for two brothers from Northern Ireland whom they described as "crucial" to an investigation into the deaths of 39 people found in the back of a truck near London last week.

The discovery of the bodies in a refrigerated truck on an industrial estate near London has shone a spotlight on the illicit trade that sends the poor of Asia, Africa and the Middle East on perilous journeys to the West.

The 39 victims - 31 men and eight women - have yet to be identified but Vietnam said it was trying to accelerate the process. It fears many of the dead were its citizens.

The bodies were found in the early hours of Oct. 23 after the container arrived in Britain from Zeebrugge in Belgium. The container was picked up at Purfleet dock, to the east of London, by a truck allegedly driven by Maurice Robinson, who is from Northern Ireland.

For the two latter alleged offences, the charge sheet stated he had conspired with Ronan Hughes and others, prosecutors said.

Police leading the investigation said Hughes, 40, and his brother Christopher, 34, from Armagh, were also wanted on suspicion of manslaughter and human trafficking.

"Finding and speaking to the Hughes brothers is crucial to our investigation," said Detective Chief Superintendent Stuart Hooper. "At this time we believe they are in Northern Ireland but they also have links to the Irish Republic.

Ronan Hughes had signed the lease papers to rent the trailer the bodies were found in, according to lawyers for the owner Global Trailer Rentals (GTR).

"The lease document was signed by Ronan Hughes, who gave an address matching that of the haulier, C Hughes Transport," the lawyers told Reuters in an email.

GTR had previously said the container was leased out on Oct. 15 and it was unaware of what it was to be used for.

Christopher Hughes, who is listed as a director of C Hughes Logistics Ltd based in Armagh, said in a 2016 interview with Irish Trucker magazine that his company ran a fleet of nine trucks, working in Sweden, Denmark, Italy and England as well as Ireland, with six full-time employees.

Police, who have said their investigation would be lengthy, have arrested three other people but later released them on police bail. Irish police have also arrested a man in connection with the investigation.

Vietnam's Deputy Foreign Minister Nguyen Quoc Cuong told Reuters on Tuesday the nationality of the victims had not been officially confirmed but his country and Britain were "trying to speed up identification of the bodies".

On Monday, Vietnam's government said British police had sent documents regarding four of the victims to Hanoi for further verification.