FRANKFURT (Reuters) - Police arrested about 60 protesters on Saturday as part of city-wide demonstrations against restrictions due to the coronavirus pandemic, German newspaper Tagesspiegel reported. The protesters had violated official guidelines to keep the virus contained, and some had attacked police officials, the newspaper said, citing a police spokesman. Two police officers were slightly injured, the paper added 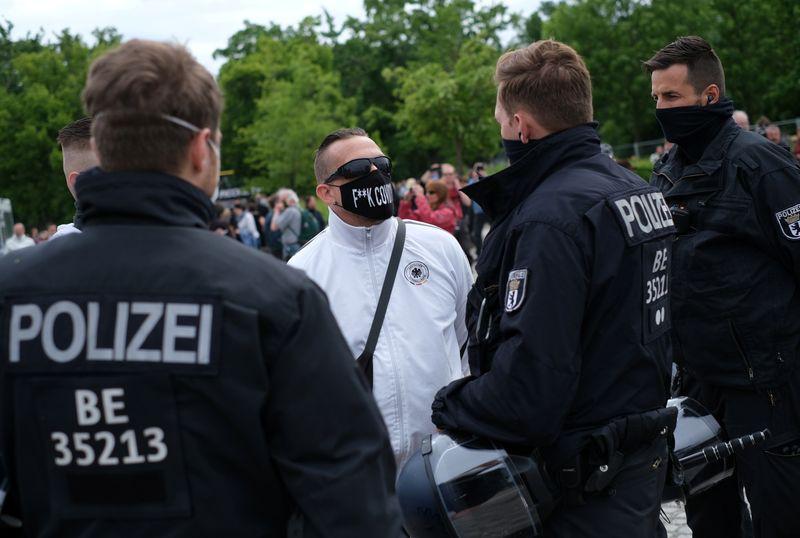 FRANKFURT (Reuters) - Police arrested about 60 protesters on Saturday as part of city-wide demonstrations against restrictions due to the coronavirus pandemic, German newspaper Tagesspiegel reported.

The protesters had violated official guidelines to keep the virus contained, and some had attacked police officials, the newspaper said, citing a police spokesman.

Protests against the measures Chancellor Angela Merkel insists are needed to slow down the coronavirus outbreak have become more vocal and demonstrators have filled the streets of the German capital for the third weekend in a row.

The number of confirmed cases in Germany rose by 638 to 177,850, data from the Robert Koch Institute (RKI) for infectious diseases showed on Saturday. The reported death toll rose by 42 to 8,216, the data showed.

Merkel, in a podcast published earlier, defended the measures, including social distancing rules, adding she was aware of the concerns some had about how they interfered with their human rights.

"Yes, I can understand these concerns," Merkel said. "This virus is an imposition for our democracy."

She still said that lockdown restrictions had been necessary to make sure Germany's health system does not get overstretched, adding this has been achieved so far.