By Pawel Sobczak and Gabriela Baczynska WARSAW (Reuters) - The Polish parliament adopted rules on Friday to expedite the naming of a new Supreme Court chief under a judicial overhaul by the ruling party that critics say undercuts democracy. 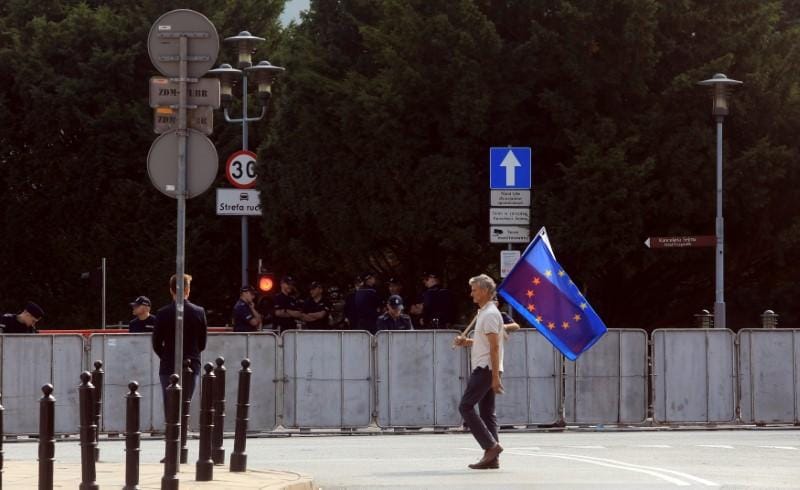 By Pawel Sobczak and Gabriela Baczynska

WARSAW (Reuters) - The Polish parliament adopted rules on Friday to expedite the naming of a new Supreme Court chief under a judicial overhaul by the ruling party that critics say undercuts democracy.

Twenty-two Supreme Court judges were forced into early retirement this month, but chief Judge Malgorzata Gersdorf has refused to go saying her constitutional term expires in 2020. She has become a symbol of resistance to the judicial revamp.

Since the nationalist Law and Justice (PiS) party won election in 2015, dozens of judges have been sacked at the Constitutional Tribunal, the National Judiciary Council, which decides judicial appointments, and now the Supreme Court.

New appointments have been made using procedures that give the parliament - where the PiS holds a majority - more say over the courts and the government more control over judges.

The European Union as well as human rights groups and Polish opposition parties say the government is infringing on the key democratic principle of impartial courts in Poland, the largest former communist state now in the EU.

Poland risks losing billions of euros in EU aid for subverting the rule of law. But Warsaw has only offered cosmetic concessions and says the overhaul is needed to improve efficiency and rid the courts of residual communist influence.

In hasty proceedings on Friday, the lower chamber of parliament approved amendments enabling a swift appointment of a new Supreme Court head. The upper chamber is expected to endorse the new rules as soon as next week and President Andrzej Duda, a PiS ally, to sign them into law soon afterwards.

Kamila Gasiuk-Pihowicz of the opposition Nowoczesna party told the PiS during parliamentary debate before the vote: "When you say you are carrying out judicial reforms, it's as if a bandit beating someone mercilessly on the face with a knuckle-duster said they were carrying out plastic surgery."

Prime Minister Mateusz Morawiecki said on Thursday it was necessary to replace Gersdorf quickly to avoid damaging legal chaos and that Poland would not heed demands by the EU's executive Commission to reverse its laws on courts.

The Commission is running an unprecedented rule of law investigation against Poland and opened several separate legal cases against Warsaw, including over the Supreme Court.

While Brussels may lack the hard tools to force Warsaw to change tack, Poland is haemorrhaging its influence in the EU at a time when the bloc negotiates its next budget from 2021, with significant development subsidies at stake.

A dozen protesters gathered outside the Polish parliament on Friday, a sharp decline from the height of anti-government demonstrations that used to attract tens of thousands.

"We are fewer and fewer .... but it is still important to state our opposition," said Piotr Domanski, a 63-year-old translator.

The PiS, however, enjoys broad support largely due to generous social spending and an economic boom.

It has rallied supporters with nationalist, conservative and Catholic slogans, vilifying social elites including judges, the liberal opposition and the EU as imposing on ordinary Poles.

Poland will hold local elections this autumn and a parliamentary vote in late 2019. All EU countries will also pick their representatives for the European Parliament in May 2019.

On Friday, the Polish parliament also approved a tweaked election rule that will benefit large parties like the PiS in the European race.

President Duda on Friday proposed that Poles hold a constitutional referendum in November with 10 questions including on whether to enshrine Poland's EU and NATO membership in the charter, or highlight the country's Catholic identity.