After a series of protests in the first week of October 2016, the Polish government announced it would not be pushing through a proposed legislation that would effectively ban abortions in the country.

The sudden u-turn of the government came as a surprise to many, yet few perceive defending the shaky status quo as a victory.

The current abortion law has been in place since the early 1990s and counts as one of the most restrictive in Europe. It is widely referred to as a ‘compromise’ between the Catholic Church and the more liberal groups in the society. However, the compromise granted little to the liberal camp, as women’s right to choose was disregarded and exceptions were only granted in cases of rape, incest, when the life of the fetus is under threat or when the mother’s health is in grave danger. And pundits assume that the ruling party will soon attempt to come up with yet another ‘compromise’ solution, further tightening the already strict law and parading it as a concession to the protesters. 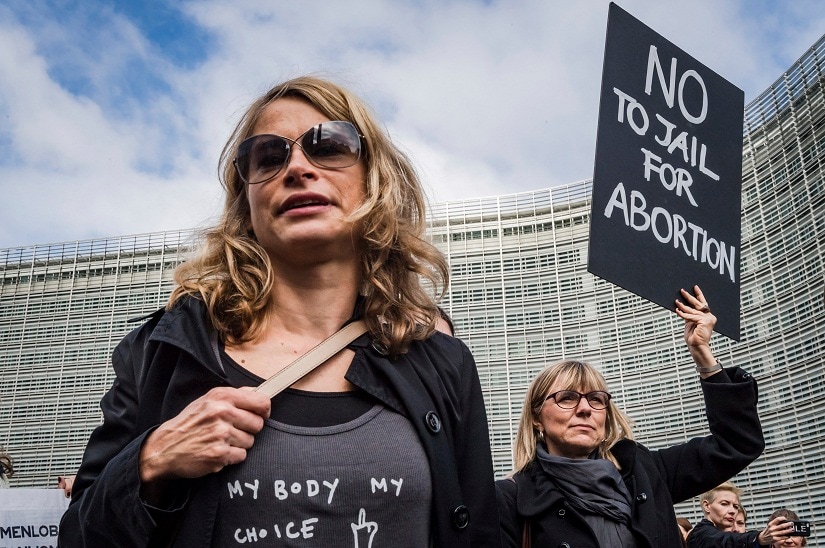 This week, a picture of a woman protesting the Polish abortion bill in Paris holding a sign saying ‘I can’t believe I still have to protest this f•• sh•’ went viral on social media. However, an alarming truth is that Europe-wide, not even mentioning worldwide, the struggle is very far from being over. Malta, the Vatican and Ireland all have similar legislation as the one people in Poland protested against.

The European Court of Human Rights that safeguards states’ compliance with the European Convention on Human Rights, has never suggested that a right to choose per se would have to be recognised as a sufficient reason to justify the abortion. However, in its ruling against Ireland, it at least stated that the law has to clarify under what conditions abortion is legal for women, whose lives are at risk, to avoid situations when doctors refrain from acting for fear of being prosecuted and thus reminding states that competing rights and interests always have to be weighed against each other. If Ireland obliged in time, Indian dentist Savita Halappanavar, who died following the refusal of doctors to abort her unviable fetus, could still be alive. In less extreme cases, European citizens can currently hardly use a solely legal framework for promoting changes. An expert on medical law, Gregor Puppinck, opened up a discussion about a necessity of implementation of the woman’s ‘right not to abort’ that the repressive states should start with, shifting the agenda from criminal law into the field of socio-economic rights. If according to some stats, about three quarters of all abortions are a result of socio-economic constraints, the states clearly fail in their duty to provide adequate living standards for women guaranteed in European and international social charters of rights. Instead of falling for the right-wing’s presentation of the issue in terms of a disintegration of the traditional family values caused by harmful liberalism and cosmopolitanism, we should all get vocal about the far-reaching social dimension of the issue.  As it usually goes, reproductive rights are also a matter of a class membership, which makes questions of gender inequality and power even more pressing.

It is especially so in countries of the former Eastern Bloc that have experienced growing social inequalities and shrinking of the welfare system for the past decades. Returning to Poland, it is crystal clear how detrimental it is that local schools truly provide little to none sexual education and that contraceptives are not subsidised by the health system, making them far less accessible for the women suffering from poverty. At the same time, the private clinic businesses (where the abortion regulations are enforced somehow more leniently) are booming and women who can afford it, increasingly engage in illegal abortion tourism. The sign the woman is holding: 'Nie v moim imieniu' means 'Not in my name'. Photo courtesy the writer

On the other side of the spectrum, NGOs estimate that up to 150,000 illegal abortions take place in the country every year. The figure is truly alarming, especially taking into consideration that many of the illegal abortions are performed by women themselves, using drugs purchased on the internet and in the worst cases, with coat hangers that have become one of the symbols of the protests.

If the estimate is correct, Poland would be the only country in the region, where the number of both legal and illegal abortions has not been consistently dropping in the past decades. During socialism, abortions were available and accessible on demand with a varying level of regulation over time across the region. The liberal legislation combined with limited sexual education lead to one result only — the states exhibited whopping number of abortions especially during the 1980s. After the fall of the regimes, Poland was the only Central European country that decided to significantly circumvent abortion laws by introducing the above-mentioned conservative ‘compromise’ bill in 1993. And while paradoxically, abortion numbers have been going down among Poland’s neighbours, the lack of any supporting educational policy programmes effectively turned the Polish on-demand abortion ban on its head.

Another dimension to this is that unfortunately, it is almost a rule that the states that ostentatiously demonstrate their interest in fetuses do not show the same level of concern for the already born children and their mothers. The social security programmes are left far behind the rhetoric about the traditional family and sanctity of the motherhood. Once babies are born, both married and unmarried mothers are left on their own. And ideally in the kitchen too. 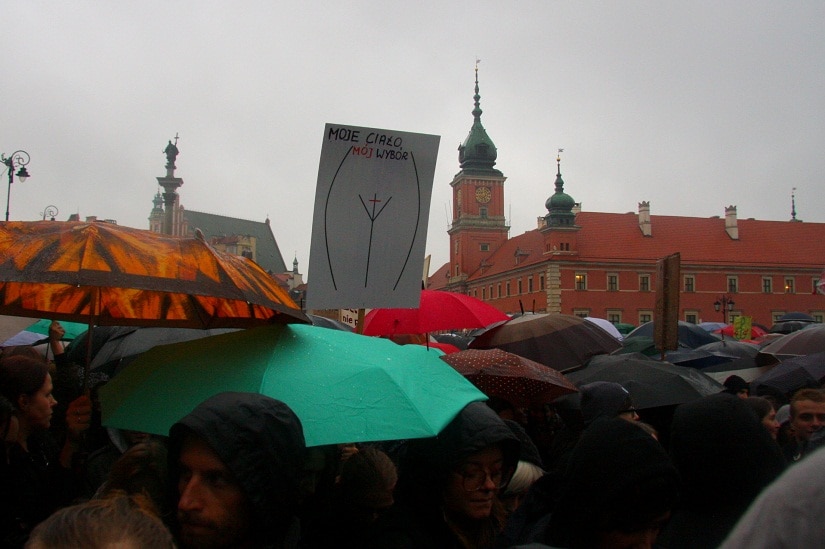 From the demonstration last Monday, 3 October. Photo courtesy the writer

Poland is a deeply Catholic country and conservative, traditional gender role division is perceived as the norm by large sections of the society. Women have to put up with proverbial double shifts, bearing the load of their actual employment, before dealing with the housework for an average of 2.5 extra hours as compared to their male counterparts. Female sexuality and any types of relations outside of heterosexual marriage are often frowned upon for trespassing the ideal of chastity and making a sensible discussion about reproductive rights unviable. The tone of the ongoing debates on abortion, sexual violence and more thus only emphasises how the bodies of Polish women are used as a site of struggle for social power usurped by the patriarchal institutions. After all, one of the most effective ways on how to exert control is to proclaim a female uterus to be res publica, something everybody should have a say in.

What is especially upsetting about the abortion debate in Poland is the fact that the Christian conservative shift in the politics is not likely to subside. The governments have been using conservative agenda as a way to steer the attention of the voters from more pressing issues such as failing health, education and social system as well as a way of launching attacks against the liberal urban elites that are partially justly blamed for the disenchantment with the post-socialist transformation. The trick is nothing new in Central Eastern Europe; it is just that Mr Orban in Hungary decided to pick on migrants instead of women. One thing is for sure, we should all brace ourselves for more to come. 'No woman no kraj' is a pun on a song, and means 'No woman no country'. Photo courtesy the writer

To not be so 'doom and gloom', it must be noted that there is at least one positive thing that the crisis in Poland directly generated — the women in the country are getting louder when speaking about their rights. The topics of their reproductive rights and gender inequalities have moved to the very centre of the public discussions, mobilising the people in and outside the country to show unprecedented levels of solidarity with the struggle. Persisting taboos surrounding the issue are also being — if not lifted — at least challenged amid the disputes. In Poland and beyond, the wave of contention is rising and the debate itself is a valuable tool for the civic activism, filling the public arena with questions about what kind of society we want to have.

The government in Poland might have not realised this, but by even attempting to introduce such a pointlessly radical piece of legislation, it has exacerbated the strength of the emancipatory movement. On the top of that, this week, we have all witnessed that organized public protest does have power. As I mentioned earlier, however, this is barely a partial victory. It will take many more #blackprotests to get where we want to be — and way beyond Polish-style compromises.

The writer is pursuing a PhD in Social Anthropology from Central European University and is based in Warsaw, Poland