By Renee Maltezou ATHENS (Reuters) - Greek Prime Minister Alexis Tsipras faced mounting criticism on Saturday after wildfires that killed at least 88 people plunged Greece into grief just as it was healing from years of painful bailouts. Survivors and political opponents accused Tsipras and his government of insensitivity for not apologising for Greece's deadliest blaze in memory and for failing to prevent the tragedy 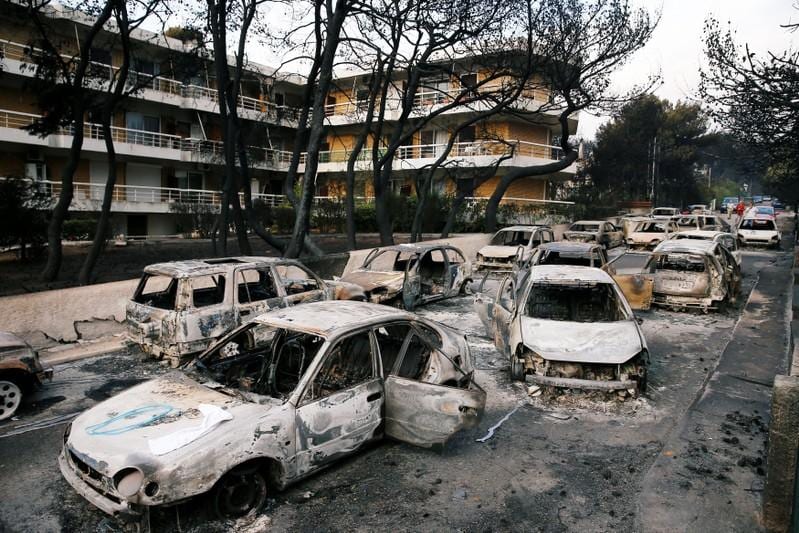 ATHENS (Reuters) - Greek Prime Minister Alexis Tsipras faced mounting criticism on Saturday after wildfires that killed at least 88 people plunged Greece into grief just as it was healing from years of painful bailouts.

Survivors and political opponents accused Tsipras and his government of insensitivity for not apologising for Greece's deadliest blaze in memory and for failing to prevent the tragedy.

He cut short a visit to Bosnia on Monday night, rushing home hours after the killer blaze broke out near Athens. But falling off the radar for three days after that has infuriated some people.

Venting anger, survivors and political opponents want to see officials resign over the failure to prevent the disaster amid questions on why an evacuation did not take place.

Tsipras appeared on TV screens on Friday to chair a cabinet meeting after an official three days of mourning ended. Aides said he had been busy coordinating the disaster response.

He said he took "full political responsibility" for the disaster. But for those who survived the inferno, the words meant little.

"Words are nice ... but I want him to tell me and the people who perished, our friends ... whose fault it is, if not his. I've reached my limits."

The wildfire in Mati laid bare decades of ills of the Greek state - unlicensed building dotting the Greek landscape, tolerated by the state as governments turn a blind eye to non-compliance and eventually legalise built homes to win votes.

On Monday night, five hours after the fire had started, state TV showed Tsipras rushing from the airport to an operations centre in Athens, asking ministers in a live broadcast what happened and how many personnel had been deployed to put out the flames.

He did not ask nor was he told anything about fatalities in Mati, the small seaside town where dozens were trapped by advancing flames and died. At least not on camera.

"Which begs the question: Didn't they know by then what had happened?" said Pavlos Christides, spokesman for the Socialist Pasok.

On Tuesday morning the death toll was 49 people. Rescuers had found the bodies of 26 people hugging each other in a field. Survivors said it all happened in less than two hours.

After announcing three days of mourning later that day, the leftist Tsipras was invisible until Friday. He is not known to have visited any of the survivors in hospital.

"He was in his office, chairing meeting after meeting, with the citizen protection minister, the interior minister, the mayors; he was busy coordinating the operation," one government official said.

The civil protection minister, Nikos Toskas, said he could not see any big mistakes made but added that there were indications of arson, something the then ruling conservative New Democracy party also said in 2007, when fires killed dozens of people in southern Greece.

Despite announcing a long list of relief measures, Tsipras was accused by the opposition of burying his head in the sand. He rejected the accusations during the cabinet meeting.

The prime minister is more focused on the "communications aspect" of the crisis than "what really matters," Christides said, arguing the government should prioritise the plight of those affected.

"There is no point in talking about his absence or his presence; there is definitely political responsibility."

Tsipras has been trailing New Democracy, the main political opposition, in opinion polls. Its leader Kyriakos Mitsotakis visited the fire-stricken areas this week. TV images showed a woman sobbing in his arms.

Tsipras' coalition partner, Defence Minister Panos Kammenos, visited Mati to face the anger of survivors. "You left us at God's mercy!" a tearful woman shouted at Kammenos, who also got into a heated debate with a survivor on whether help was sent in a timely manner.

Tsipras has promised closure, saying the government will look into what went wrong and fix past failings to avoid a repeat tragedy. Whether the Mati disaster will damage his popularity further remains to be seen and will be decided by his actions, analysts said.

But it is not uncommon for politicians in Greece to stay out of the public eye after a disaster.

"It is standard practice that in dead-end situations, the object of ... hatred vanishes," said political analyst Dimitris Mavros, adding that no politician could take the risk of appearing helpless, standing above the ashes.

For a graphic on the wildfire click on: https://tmsnrt.rs/2K6N3Qc