Prime Minister Narendra Modi reached China on Thursday morning on a three-day visit during which he will hold summit talks with Chinese President Xi Jinping on a range of issues including the festering border dispute and China’s plans for infrastructure projects in PoK.

Modi, who is undertaking his first visit to China as Prime Minister, would begin his day with a visit to the famous Terracotta Warriors museum which has a large collection of terracotta sculptures depicting the armies of Qin Shi Huang, the first Emperor of China.

Ni Hao!. PM @narendramodi  arrives in the historic city of Xi’an, on the first leg of his China visit pic.twitter.com/WYA8A5kl1M

PM @narendramodi leaves for China. He will be travelling to China, Mongolia and South Korea on bilateral visits. pic.twitter.com/93oLARiC9U

He would later visit the famous Buddhist Dashang temple in Shaanxi province, the home province of President Xi, who has restored its old glory by making it the headquarters of his mega Silk Road projects.

Xi will join Modi in the afternoon and the two leaders would spend nearly about five hours with restricted as well as informal talks to build on their rapport discussing the most contentious issues like border dispute and China’s big push to rope in reluctant India into the Silk Road projects, specially the maritime silk road (MSR) over which India has strong reservations. 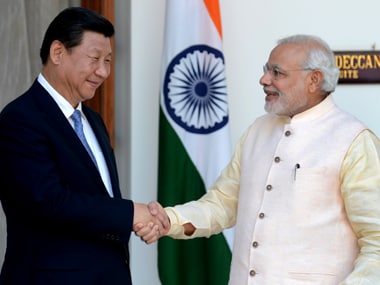 In Xi’an, Modi will be hosted by Xi, departing from normal protocol to reciprocate gesture by Modi in Ahmedabad when the Chinese leader visited India in September last year.

Xi would accompany him to the famous Wild Goose Pagoda, the magnificent structure built in sixth century to commemorate the visit of a spiritual structure build to highlight famous Chinese Buddhist monk Xuan Zang’s 17-year-long journey.

Modi would also be accorded traditional Tang dynasty welcome followed by a banquet by Xi.

After informal interaction with the Chinese President, Modi will leave for Beijing late in the evening.

He is scheduled to hold talks with Premier Li Keqiang next day and go to Shanghai where he would address a business get-together, inaugurate the first Mahatma Gandhi chair at Fudan University and address the Indian community.

China is the first leg of Modi’s three-nation tour that will also take him to Mongolia and South Korea.