By Aleksandra Michalska PHILADELPHIA (Reuters) - Philadelphia officials imposed a citywide after-dark curfew on Wednesday, seeking to avert a third night of violence amid protests over the fatal police shooting of a Black man wielding a knife and described by family as undergoing a nervous breakdown. 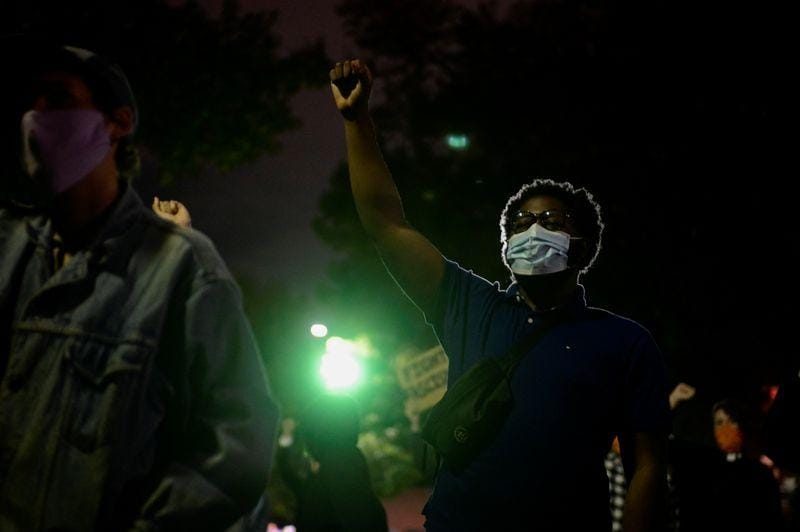 PHILADELPHIA (Reuters) - Philadelphia officials imposed a citywide after-dark curfew on Wednesday, seeking to avert a third night of violence amid protests over the fatal police shooting of a Black man wielding a knife and described by family as undergoing a nervous breakdown.

The streets of Pennsylvania's largest city have been tense since Walter Wallace, 27, was gunned down on Monday by two police officers responding to what his relatives say was a call for assistance with a mental health crisis.

His death set off two nights of looting and periodic skirmishes between police in riot gear and protesters decrying the shooting as the latest instance of racially biased policing in a U.S. criminal justice system that often subjects African Americans to lethal force.

In a bid to tamp down further disturbances, Mayor Jim Kenney announced a 9 p.m.-to-6 a.m. curfew starting on Wednesday.

Philadelphia police made 172 arrests, and 53 officers were injured over two nights that began with peaceful demonstrations but gave way to looting of big-box stores and other businesses, some of them still recovering from unrest in the summer.

City officials said as many as 1,000 people were involved in looting in one corner of the city on Tuesday night, catching police off guard.

"These individuals are doing nothing but simply wasting our precious resources," Philadelphia Police Commissioner Danielle Outlaw told a news conference on Wednesday, condemning what she called "widespread lawlessness."

The turmoil turned Philadelphia into the latest flashpoint over racial justice days ahead of Tuesday's presidential election. It caps months of protests ignited by the May 25 death of George Floyd, a Black man in handcuffs, as he was pinned by his neck to the street under the knee of a white Minneapolis policeman.

U.S. President Donald Trump, seeking a second term in office, has made support for police a top campaign issue, calling for a tough "law-and-order" stance toward protests. In Nevada on Wednesday, Trump said the events in Philadelphia were "terrible" and offered to send federal help.

On Tuesday, his Democratic challenger, Joe Biden, lamented "another Black life in America lost," adding, "We cannot accept that in this country a mental health crisis ends in death."

Pennsylvania is a crucial battleground in the election, but it remained to be seen how events in Philadelphia, a predominantly Black and Hispanic city and a Democratic stronghold, might affect the outcome of the vote in the state.

Wolf said his administration was ready to help the city, including to "avoid unnecessary harm to businesses that provide services to affected neighborhoods."

"We must address the systemic problems that cause tragedies against people of color," he said on Twitter.

Tuesday's upheavals erupted despite pleas from the dead man's father, Walter Wallace Sr., to "stop the violence" out of respect for his son and family. He also called for justice in a case that remained under investigation.

An onlooker's video footage of the fatal confrontation posted on social media showed Wallace approaching two police officers who drew their guns after ordering him to drop the knife. The camera cuts away briefly as gunfire erupts and Wallace collapses.

Police have said the two officers fired about 14 shots combined.

An elder cousin of Wallace, Roosevelt Brant III, a family pastor, told Reuters relatives had called authorities for help in dealing with an episode of mental distress, "and the police showed up."

A lawyer for the family told reporters Wallace suffered from a bipolar disorder, and his wife communicated his condition to the officers who encountered Wallace before they shot him.

According to the Philadelphia Inquirer, police had been called to the Wallace household dozens of times in recent months. Public court documents show he had a lengthy criminal record, including at least one prison sentence for a felony conviction, and was awaiting trial in a criminal threat case.

Outlaw said the city would release body-camera footage from the police and the emergency-911 call records related to the shooting after the Wallace family had a chance to review them.

She declined to detail any 911 calls made by the family, citing the active investigation.

"I think it's safe to say that once officers were on the scene people were saying that there may have been mental issues there but that's what the investigation will reveal."