By Marco Aquino LIMA (Reuters) - Peru's prosecutor's office said on Saturday it raided eight homes of former government employees and associates tied to a case of alleged irregular hiring that has led the opposition Congress to call for the removal of President Martín Vizcarra. 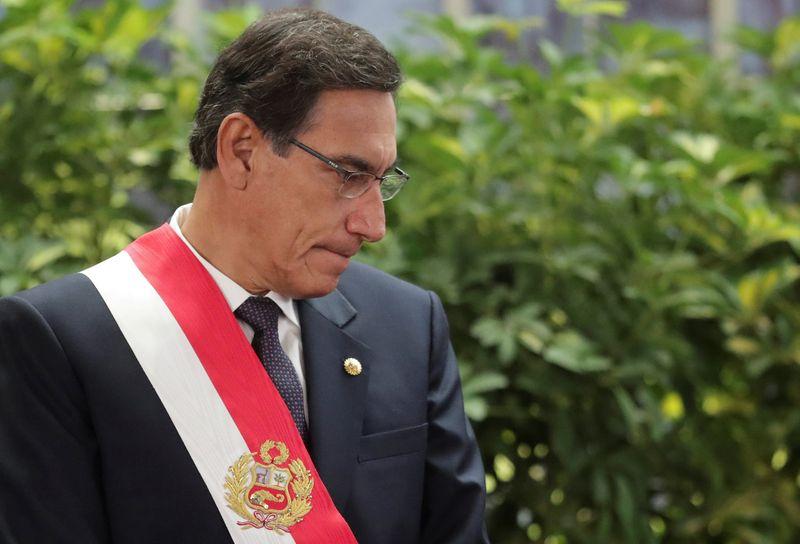 LIMA (Reuters) - Peru's prosecutor's office said on Saturday it raided eight homes of former government employees and associates tied to a case of alleged irregular hiring that has led the opposition Congress to call for the removal of President Martín Vizcarra.

Congress voted to start impeachment proceedings against Vizcarra on Friday, plunging the Andean country into political crisis even as it battles a major economic slump and coronavirus outbreak with one of the highest mortality rates in the world.

The state prosecutor said the raids included the home of Richard Cisneros, a little-known singer who goes by the name Richard Swing, who has become a focal point of the political furor, as well as two officials close to Vizcarra.

Cisneros was awarded government contracts for motivational talks worth around $49,500, which some lawmakers allege were due to links to Vizcarra. The leaked tapes appear to include Vizcarra discussing meetings with Cisneros with aides.

Peru's Congress has summoned Vizcarra to make his defense next Friday. The President, who has no party representation in the legislature but remains popular with voters, has rejected the accusations against him and accuses parliament of a plot.

The abrupt move to oust Vizcarra would need the support of 87 votes from the 130 legislators. The motion to start the impeachment process, citing "moral incapacity", passed with 65 votes in favor and 36 against.

The raids sought evidence related to an investigation that does not include Vizcarra directly, but does involve some of his senior aides.

Vizcarra assumed the presidency in March 2018 after the resignation of Pedro Pablo Kuczynski, who was cornered by Congress with allegations of irregularities.

In September last year, Vizcarra dissolved Congress over a dispute with the opposition over anti-corruption reforms, and in January a fragmented parliament was elected to complete the legislative term until July next year.

If the dismissal is approved, the head of Congress, Manuel Merino, would assume the position of head of state according to Peru's Constitution. There is currently no vice president due to the resignation of the previous one.

Vizcarra had already called for the presidential and legislative elections for Apr. 10 next year and has said that he will not run. Peru is the world's no. 2 copper producer.